Why Romney is Obama’s dream opponent

He represents the most reckless forces of an unfair economic system 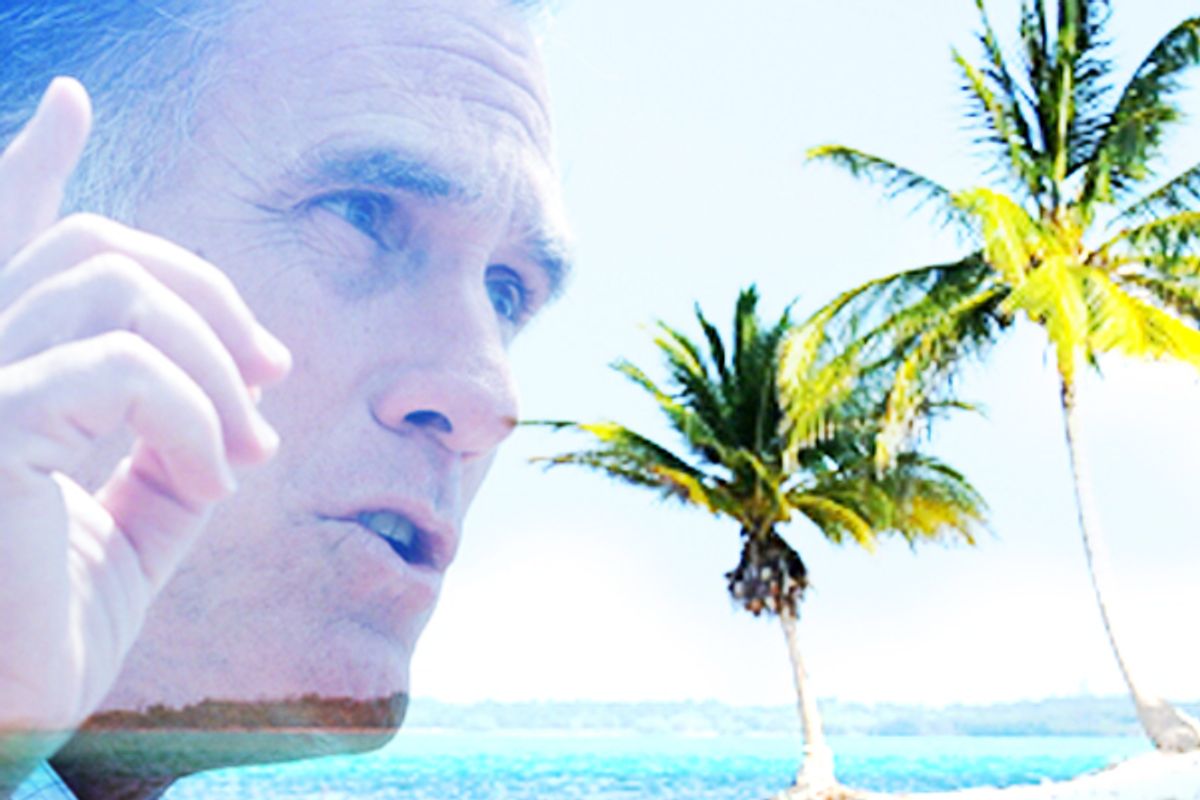 The latest news in Mitt Romney-land is that he has been parking offshore some of the proceeds from his slash-and-burn adventures in America's private sector. You’ve got to love a guy like this. When he falls off a cliff, he doesn’t stop to watch the seagulls. The revelation from ABC News makes it official: Romney is the most vulnerable presidential candidate to come out of Massachusetts since Michael Dukakis.

ABC said it reviewed documents showing  that Romney deposited  millions of dollars of his personal wealth “in investment funds set up in the Cayman Islands, a notorious Caribbean tax haven.” Let’s be clear: this is perfectly legal. It’s also, for a businessman, perfectly ethical. The tax laws allow it, as long as it isn’t used to evade taxes—as Romney’s people insist. But it also stinks, as Romney is utilizing the same kind of offshore havens that organized crime and white-collar criminals use to avoid detection. In other words, it’s very much like pretty everything else Romney did at Bain Capital: it looks dreadful to the people who lines up at the polls on Election Day.

Don’t think for a moment that all the negative press Romney is getting, like this latest bit of merry news or the front page leader in the New York Times, is going to go away if he gets the GOP nomination. This isn’t the invention of the liberal media. It’s Romney’s chickens coming home to roost. It’s going to stick. So when you see the Newt Gingrich super-PAC’s half-hour video describing what happened when “Mitt Romney came to town,” that is just an appetizer. The banquet follows in the fall, if and when Mitt gets the nomination God willing, and the Democrats start running against him.

The latest revelataion complements my analysis last week of Romney's rampage through the most fragile industrial companies of America in the 1990s. It’s now reasonably well established that Romney represented the most reckless forces of American capitalism. He is the anti-Warren Buffett, a status that the Sage of Omaha himself reinforced a few days ago, when he told TIME magazine ““I don’t like what private-equity firms do in terms of taking out every dime they can and leveraging [companies] up so that they really aren’t equipped, in some cases, for the future.”

This is about the worst publicity the private equity firms have gotten since the early 1990s, when they were savaged as “barbarians at the gate” in the seminal book of that title. In fact, the Romney candidacy is a thrilling development in one sense, as it has commenced a national debate over the noxious giveaway for the 1% known as “carried interest.”

That was denounced at length by Buffett in his TIME interview. While one might argue that Buffett’s attacks on his fellow billionaires is a bit hypocritical, for he rarely argued against such things when he building up his gazillions, he is absolutely right-on when it comes to how outrageous carried interest surely is.

Simply put, it means that the Mitt Romneys of the world—managers of high-end investment vehicles—aren’t taxed at the same rate as the rest of us. They’re a kind of privileged class, with their income taxed at the capital gains rate of 15%, while the rest of us have to pay much higher rates on ordinary income. Buffett has pointed out that most of his income is taxed at that rate, giving him an effective tax rate of 17.7%, while his own secretary, earning $60,000, was taxed at 30%, as an ordinary working person getting W-2 income.

The reason is that Buffett gets the lion’s share of his income in the form of capital gains. That puts him in the same boat as hedge funds that manage money for the wealthy, and the private equity funds of the kind that Romney used to run. Under the tax law, their income from running such outfits is treated as capital gains. Their managers actually do get salaries and fees, but they’re just a small portion of their income. So they pay less in taxes, proportionally, than the guy who comes by after hours to scrub toilets.

Now, if the cleaning person’s income flowed from toilet-bowl company dividends, he would be taxed at the lower capital gains rate. But since he actually scrubs them out, our tax laws put him at a disadvantage. You have to understand the supposed economic purpose of the capital gains rate to understand how wacky this all is. The cleaning person gets taxed more because cleaning toilets doesn’t add value to the economy, in the eyes of the law. The fiction behind lower capital gains rates—the “differential” so holy to the finance—is that if we lavish tax benefits on people who buy and sell stocks, it will increase the amount of such activity, thereby boosting the amount of saving and investment.

It’s all a lot of rot, as numerous studies—such as this Congressional Research Service study from 2010—have proven. All a lower capital gains rate does is cut revenues to the government, without having much useful economic impact. The idiocy of a lower capital gains rate multiplies upon itself when it becomes an enormous boon for the super-wealthy buyout moguls like Mitt Romney.

No wonder Romney isn’t all that anxious to show his tax returns. He has said that he will probably do so in April, but don’t be surprised if he’s home sick with a sore throat on the appointed day. He has said that most of his income is “probably” capital gains and thus taxed at 15%.

If Obama, who has already pledged to end the carried interest obscenity, fails to exploit that issue to the hilt, he should hand in his Chicago Democratic Party membership card.  And that’s not the only Romney vulnerability that he can exploit, apart from his company-killing activities.

Romney has said that he would like to repeal Dodd-Frank law regulating the financial services industry. That sounds like ordinary election-year politics, which it is. But Dodd-Frank has special resonance for the private equity industry. One of the provisions of the law that private equity managers despise is the Volcker Rule, which, among other things, prevents banks from taking a stake in private equity funds. That cuts right into their ability to raise capital.

What this means is that Romney is the last person Republicans want to argue for repeal of Dodd-Frank.

While a renewed national debate over the private equity industry will be welcome, don’t expect any actual improvements in the tax structure or any new strictures on private equity. Don’t expect Congress will do something about offshore tax havens, which are as firmly etched into the granite of the Republic as Mount Rushmore. If anything, Congress will have to fight hard to preserve the Volcker Rule and other provisions of Dodd-Frank. That’s because the private equity industry talks the lingua franca of Capitol Hill: money.

The money-in-politics trackers at MapLight.org have found that contributions to Democrats in Congress from the private equity and investment industry, $17.4 million, have far outstripped contributions to Republicans over the past four years. In fact, these fat cats gave considerably more to Obama than to John McCain in 2008. No wonder bankers like Jamie Dimon, CEO of J.P. Morgan Chase, have been griping all year like jilted suitors about Obama's sometimes populis rhetoric.

You can’t expect Congress to change its stripes, or give up its “gimme” instincts for campaign contributions. It’s realistic to expect that carried interest, like the unjustified lower rate on capital gains, is one of those injustices that will remain with us until people fundamentally reform the payola-infested campaign finance system. The Volcker Rule, the subject of a congressional hearing today, will continue to be under assault, and the Mount Rushmore of offshore tax havens isn’t about to be blasted to smithereens.

That’s reality. Live with it. Meanwhile, count your blessings: the Republicans have a dream candidate for president.