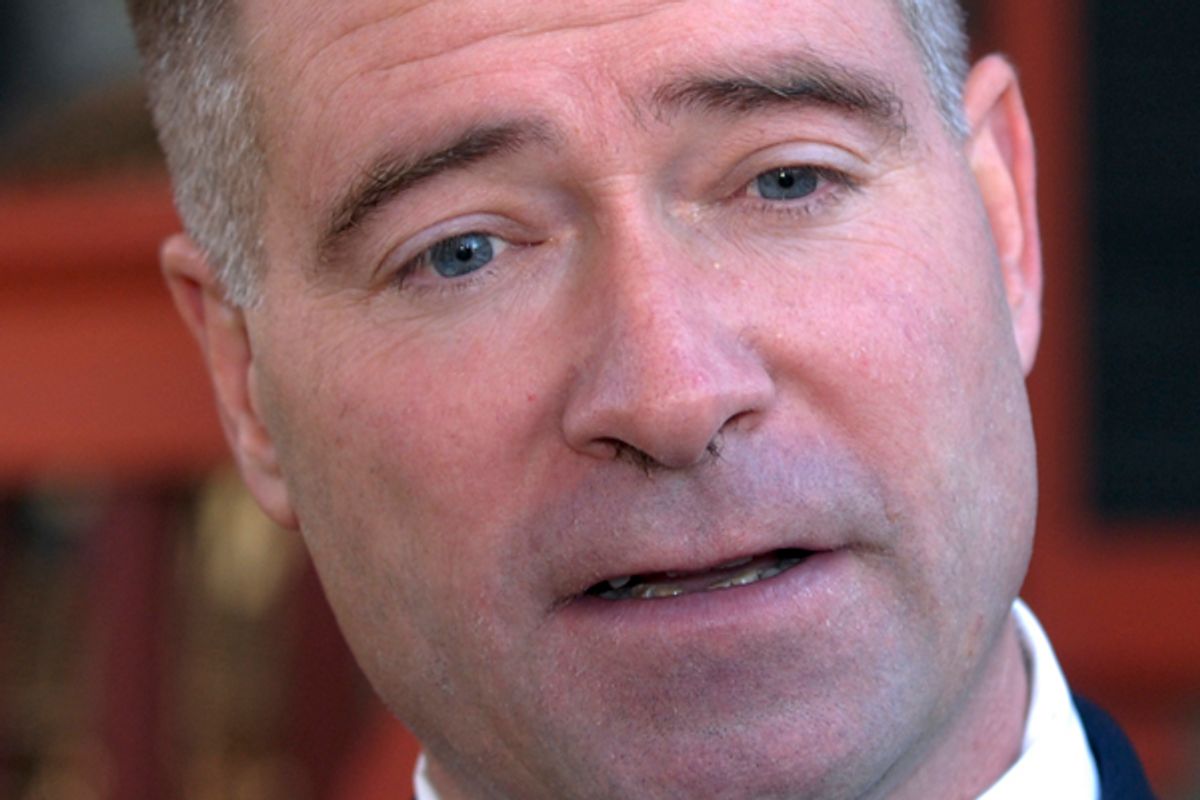 On the day Occupy Congress came to Washington, I tagged along with seven Bard College students who went to talk to their representative, first-term Republican Chris Gibson from the 20th Congressional District of New York.  Listening to Gibson defend his vote for the National Defense Authorization Act (NDAA), which President Obama signed on New Year's Eve and which allows for the indefinite detention of American citizens, I had a rare glimpse into the contemporary authoritarian mind-set in all its banality. It illustrated how the slow erosion of civil liberties manifests itself in the halls of power in Washington.

Gibson is a retired Army colonel, and it shows. From the Airborne division name plate on his desk, to the photographs of camouflaged soldiers that adorn his walls, to the “Beat Navy” button on his desk, his military background is on display. He spoke about serving in the military to defend American’s rights – rights that he claims to take very seriously. To his credit, Gibson joined 26 other House Republicans in voting against the extension of the Patriot Act in February 2011. But his written record, and his NDAA vote, indicate he is a politician more concerned with waging war than preserving liberty.

He believes “the West” faces an existential threat from al-Qaida. On Page 4 of his book "Securing the State," published in 2008,  he wrote:

The US is engaged in a difficult struggle against a determined enemy who publicly declares his strategic aim the establishment of a caliphate in the Middle East and the ultimate destruction of the West.

Since then, Gibson has publicly said that Congress should “declare war on al-Qaeda,” which “could re-focus the nation and provide the political consensus necessary to consolidate and restructure the Federal government to win this war” [emphasis mine]. Those quotes are from an Op-Ed that argues the federal government, particularly the national security apparatus, is bloated and uncoordinated. He believes that a Joint Special Operations Command-style military is a better paradigm than the one envisioned by Donald Rumsfeld. President Obama also favors a JSOC model for foreign intervention.

When one of the Bard students asked about the NDAA, Gibson was well prepared. He removed three documents from his bag: a copy of Section 1021 of the bill, Obama’s signing statement, and an on-the-congressional-record conversation between two congressmen declaring the writ of habeas corpus was unaffected by anything in the NDAA.

Gibson rested his defense of his claim that the NDAA doesn’t significantly alter U.S. citizens’ civil liberties on Section 1021(e), which states, “Nothing in this section shall be construed to affect existing law or authorities relating to the detention of United States citizens, lawful resident aliens of the United States, or any other persons who are captured or arrested in the United States” [emphasis mine].

This section has already received substantial scrutiny online, which I won’t restate here, but sitting in Gibson’s office, he did his best to present this passage as proof-positive that all this anti-NDAA activism was much ado about nothing. He repeated it several times for us: “'Nothing in this section shall be construed to affect existing law.’ It’s right there in the bill, this doesn’t change anything.”

“But I think critics would say ‘existing law’ is part of the problem,” I interjected. I cited the assassination of U.S. citizen Anwar al-Awlaki as the most troubling example of existing law, and that a case like Hamdi – which eventually ruled that the law required Hamdi to be granted habeas rights – is overshadowed by the president’s decision on al-Awlaki. If the president claims the power to assassinate a U.S. citizen without due process and in complete secrecy, then he also has the power to indefinitely detain citizens.

“I have to concede the point on al-Awlaki,” Gibson responded. He went on to say the al-Awlaki situation wasn’t handled well. He said there should have been some sort of judicial overview, something like a public defender, which could be selected by a group like the ACLU, to offer a defense in cases like this. Gibson believes al-Awlaki was engaged in war against the United States, but he readily admitted that that wasn’t enough; the government needs to prove those kinds of accusations.

And that, as they say, is the rub. After spending 15 minutes defending the NDAA, offering argument after argument about how it doesn’t change anything about citizens’ rights, how it doesn’t erode our liberties, he abandoned the point. When faced with the most egregious example of unconstitutional behavior by the executive branch – deprivation of life without due process – this staunch defender of the NDAA is forced to concede the point. What kind of logical pretzel must Gibson’s mind be twisted into? How can one cite “existing law” as the anchor of that section of the bill -- as the language that prevents the executive from overreaching its power -- and then, when faced with abhorrent existing law, simply concede the point? An argument that flimsy would not do well in a high school debate tournament. In the context of the U.S. Congress, it’s what passes for nuance.

This is how civil liberties get eroded: not by landslides, but by glaciers. Inch by inch. Those who claim to believe in liberty sacrifice it for the illusion of security, all the while holding themselves up as staunch defenders of the American Way. To whatever extent Gibson believes his own rhetoric about the importance of the Bill of Rights, his actions tell a different story, a story of illusion trumping logic and fact.

The greatest threat to America is the steady drip of, “I’ll concede that point,” but, after all, you’re citing a fringe example from which we can’t extrapolate. We are a Free Country, and no bill or act or presidential decree can take that away. Those who find comfort in that line of reasoning – and Gibson has plenty of company in both parties – are, whether they know it or not, acting as authoritarians. They must confront their own complacency and reverse course if they wish to actually defend civil liberties, instead of just claiming they do.