Pick of the week: The ultimate female action hero 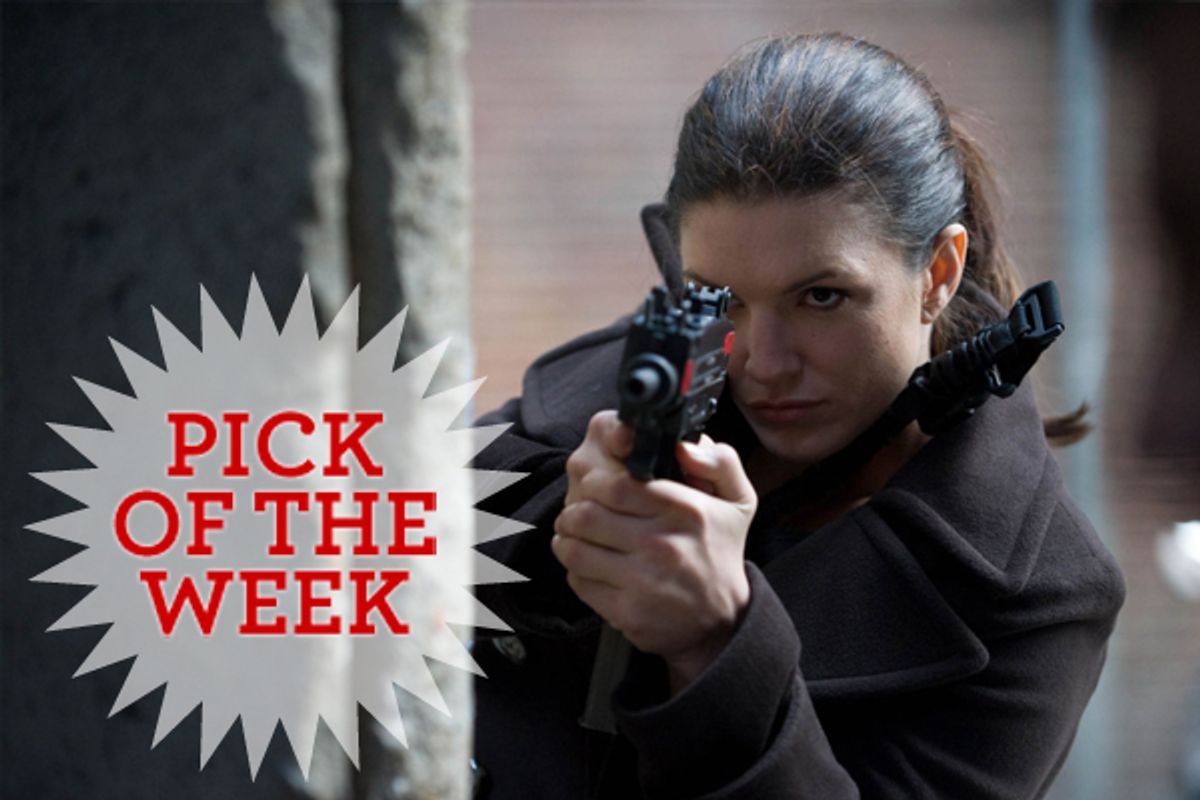 During one of the brief interludes in Steven Soderbergh's action-thriller "Haywire" when super-double female secret agent Mallory Kane (played by Gina Carano, an athletic and sultry mixed-martial-arts star) isn't elaborately kicking some guy's ass, she enjoys an enigmatic walk-and-talk with a suave French evildoer who wants to show her around his immense Irish estate. The guy is played by Mathieu Kassovitz, himself an action director of some note ("La Haine," "Gothika" and the forthcoming "Rebellion"), and already you know a lot about "Haywire": It stars a female professional fighter, it's got lots of fancy-dress locations, and it's got weird little film-buff in-jokes. A Soderbergh movie, in other words.

But I digress. Trying her best to act demure and ladylike -- and it's not too convincing -- Mallory tells Frenchie she doesn't want to see his famous outdoor maze. She's drunk, she's tired, she gets claustrophobic. "Oh, no," says Kassovitz, giving her his best non-reassuring cat grin. "The whole point is to relax and lose yourself." That's a Soderberghian meta-statement, for sure (the script for "Haywire" is by Lem Dobbs, who also wrote "The Limey," Soderbergh's awesome actioner from 2001), and it's extremely good advice when it comes to appreciating this supremely economical, pulse-pounding and undeniably bewildering thriller, which plays like a blend of mid-'90s Hong Kong action flick and mid-'70s European crime drama. Arguably this movie amounts to less than the sum of its parts -- but hot damn, those are some parts.

There's no question that Soderbergh is a supremely talented craftsman of cinema. Just to cite one element, his use of ambient sound in this picture to heighten drama and tension and comedy is superlative, from an overly loud cash register to the beep-beep-beep of a Dublin crosswalk indicator to the sudden fwump of a deer coming through the back window of an economy car. Yes, I said "back window" and "economy car"; this movie's big motor-vehicle chase occurs in reverse, through the snow of upstate New York, in a carjacked Mazda. And he's always better off when he's not trying to make deep or meaningful works of art. He views his characters from a cold distance under any circumstances -- the hero of his last thriller, "Contagion," was arguably the killer virus -- and seen through that perspective casting a purely physical performer like Carano in a shameless genre exercise is a brilliant choice.

"You shouldn't think of her as a woman," purrs Mallory's treacherous boss and former lover (Ewan McGregor), late in the film. "That'd be a mistake." I really didn't mind Carano's acting in this movie; her line readings are acceptably laconic (some reports have suggested her voice was digitally altered) and despite her protests to the contrary, she can certainly wear a dress. But she's undeniably more like a cyborg than a human being, from her slightly plasticky centerfold good looks to her phenomenal aptitude for fight choreography. (Needless to say, if I ever meet her in person I will deny writing any of this.) We've had a rash of female action heroes lately ("Sucker Punch," "Hanna," etc.), but Mallory is without any doubt the most fearsome of all.

If you've seen the dynamite first five minutes of "Haywire" (available on Hulu and embedded below) you get the drift: Soderbergh literally drops us into the middle of the action, as Mallory and an unexplained acquaintance named Aaron (Channing Tatum) engage in a bone-crunching, glass-breaking throwdown in a rural New York diner. For trying to intervene in chivalrous fashion, a local teenager named Scott (Michael Angarano) gets dragged into a high-speed chase with Mallory, and gets to hear the story of exactly why she had to beat Aaron to a pulp, despite the hot sex they had after their supposedly successful mission in Barcelona. Then there was the subsequent mission in Dublin, alongside a too-sexy British superspy played by Michael Fassbender, the one where she didn't go into Kassovitz's maze. That one didn't go nearly as well, and that's when she found out that her shadowy employers were a pack of corrupt sleazebags who were trying to bump her off.

I wouldn't waste too much time trying to sort out who's good and who's evil (hint: nobody and everybody, respectively) or what all the skeevy intelligence bureaucracies and even skeevier private contractors have to do with each other. "Haywire" is about enjoying the relentless and elegant action sequences, which culminate with an extended hand-to-hand fight scene in which Carano and Fassbender completely destroy a luxury suite in Dublin's Shelbourne Hotel. The film's interstices are mostly filled by clipped dialogue delivered by a fabulous list of male costars: McGregor, in an unflattering Marine Corps-veteran haircut, as Mallory's private-sector boss; Michael Douglas oozing retirement-age grumble as their CIA contact; Antonio Banderas is a bearded State Department functionary who seems entirely composed, down to the molecular level, of expensive rum, Cohiba cigars and Viagra.

I'm tempted to say that "Haywire" is a summer movie exiled to the middle of winter, except that generally speaking the off-season months are when we see the most interesting action movies anyway. (Last year, for example: "Unknown," "The Adjustment Bureau," "Source Code," "Kill the Irishman.") With a budget of $25 million and a cast loaded with A-minus stars, this doesn't feel much like an indie, but "Haywire" is a lean, clean production, shot and edited by Soderbergh himself and utterly free of the incoherent action sequences and overcooked special effects that plague similarly scaled Hollywood pictures. I'm not going to argue with you about the ethics or morality of this movie (since it doesn't have any). But it's ingenious, old-school, thrill-a-minute movie entertainment, effervescent eye candy for guys and gals alike.