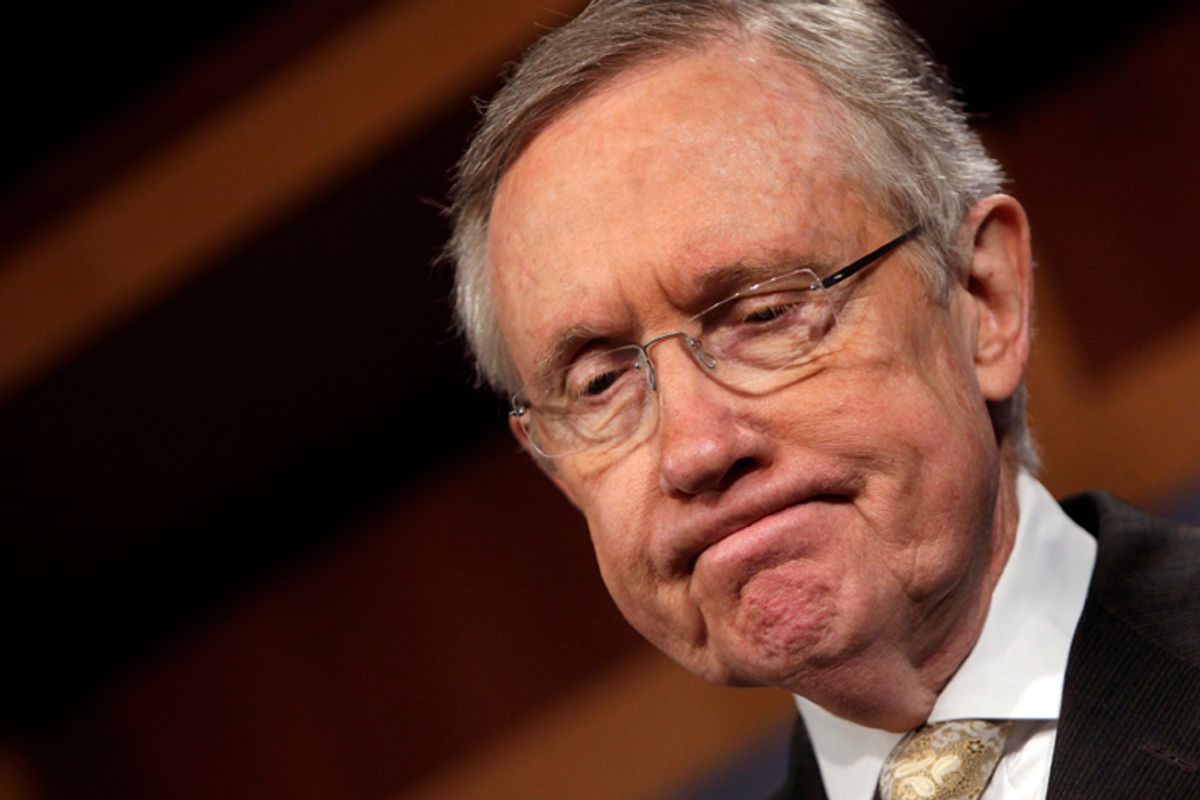 After Wednesday's one-day  blackout of Wikipedia, Craigslist and scores of other sites to protest the House of Representatives' Stop Online Piracy Act and its Senate companion, Protect IP Act; after Google's collection of a reported 7 million petition signatures; after seven co-sponsors of the Senate bill repudiated it and dozens of other rejected it, attention turned to Senate Majority Leader Harry Reid, a supporter of the legislation. What would he do in response to the historic digital outcry?

On Friday morning, Reid settled the matter. "In light of recent events," read a statement sent out by his office, "I have decided to postpone Tuesday's vote on the PROTECT I.P. Act."

The move by Reid to hit pause on the bill, known as PIPA, is a big deal -- not least as an acknowledgment that online protest is shaping his agenda.

"To me, it was a day for the history books," Sen. Ron Wyden said in an interview with Salon on Thursday night. "In terms of communicating with government, America is never going to be the same. This showed that you can literally have millions of people being able to weigh in directly with their legislators when they feel that they haven't been listened to."

Wyden has a unique perspective. It was the Oregon Democrat who was holding up the bill that the Senate was scheduled to vote on Tuesday of next week. Backers of PIPA needed 60 votes to advance a motion to proceed and break Wyden's hold. As recently as Tuesday of this week, the bill's supporters looked to be in a strong position.

Objections to the bills from the tech community had not swayed the bill's sponsor, Sen. Patrick Leahy, chairman of the Judiciary Committee, or the majority leader.

"Leahy and Reid don't care about statements and speeches," said one Senate aide. "They care about pushing the levers of power. And the Internet stepped up and said, 'That's not how you pass legislation anymore.'"

The untold story here is that SOPA, the original target of the online community, had derailed PIPA, a bill with a longer pedigree and, according to online observers, a less aggressive approach. "PIPA is terrible," says Electronic Frontier Foundation senior staff technologist Peter Eckersley. "SOPA is ghastly."

After SOPA's introduction in the House in October, Judiciary Committee Chairman Lamar Smith, Republican of Texas, put on a hearing that was ostensibly intended to give the bill a once-over. The proceedings were comically stacked with Google's policy counsel, Katherine Oyama, serving less as a technical witness and more of a punching bag for complaints about the search engine giant. That a congressional hearing on a critical piece of legislation could be so vapid infuriated the tech community. In response, technologists rallied around American Censorship Day, and found a champion in Rep. Darrell Issa, chairman of the House Oversight Committee, who suggested an alternative bill. Republicans and Democrats alike condemned the superficial consideration of the bill.

The House meltdown sent PIPA's backers on the Senate side scrambling to separate themselves from the mess. A two-page fact sheet circulated in the Senate making the case that the House's bill "differs from the PROTECT IP Act" in several key ways.

"Much of what has been claimed about the Senate’s Protect IP Act is flatly wrong," Leahy declared on the eve of the blackouts, "and seems intended more to stoke fear and concern than to shed light or foster workable solutions."

And if Leahy still felt confident of the bill's passage at the time, it was probably justified. As of last week, PIPA had attracted 41 co-sponsors.

"It's the content industry lobbyists who are best known in the Senate," he said. "They've always had their way here. It picked up all these sponsors because the content industry worked so cleverly to tell everybody, 'This is non-controversial. Nobody is in favor of piracy. This is practically a gimme.' When people hear that, and that powerful industries are for it, often all the implications don't get thought through. We heard from senators who said, 'I had no idea that this would do this kind of damage to the Internet, to cybersecurity, and the like.'"

But if the online protests got all the attention this week, equally noteworthy was the reaction of people who had written the bill. They went back to the drawing board -- behind closed doors.

The Motion Picture Association of America made little pretense about the fact that it was instrumental in writing the bill. The OpenCongress blog pointed to a New York Times story in which an MPAA executive declared, "We will come forward with language that will address some of the legitimate concerns" about the bill.

This week, MPAA Chairman Chris Dodd came out and talked about tweaking PIPA as doing "the hard work of legislating," sounding much like the Democratic senator from Connecticut he until recently was. (Hollywood, for the record, made noises about dropping its traditional support for Democrats, perhaps not noticing that far more Republicans than Democrats withdrew their support from PIPA in the wake of the protests.)

PIPA's proponents seemed to be misunderstanding the argument that its opponents were making. They don't reject what's in the bill. They reject the bill's very existence. "

Why is  PIPA so irredeemable? For one thing, say its critics, the congressional copyright crackdown assumes facts about digital piracy not yet in evidence. If online piracy is truly so massive a problem for the U.S. economy, doesn't it require more methodical study in Congress, with input from a wider range of experts?

For another, they're not willing to concede that the Senate Judiciary Committee, so diligently cultivated by the MPAA over the years, should be the be-all and end-all when it comes to conversations about fostering profitable digital content circa 2012. Or that law enforcement should be the go-to response framework.

Other committees might deserve a crack at developing legislation.

"How do we get our content industries to migrate to business models that get creators paid in the Internet era?" Eckersly asked. "You don't need to fight a crazy global war against piracy to have a YouTube or an iTunes."

This tectonic shift of the ground under PIPA has some people searching for ways to reframe the situation in the dynamics Washington knows so well. It's Hollywood vs. Silicon Valley. It's MPAA vs. Google. Dodd, for example, breezily explained the reported removal of domain name filtering from PIPA -- one of the provisions that technology types found most egregious for its targeting of the Internet's core infrastructure -- as "something the Google crowd didn’t want to have done."

The revealing assumption: Congress must be taking its marching orders from someone with a ton of money. But that's revisionist. All signs indicate that Google was ready to accommodate itself to some form of  PIPA. The company's blacking out of its logo this week was attention-getting, no doubt. But a close watching of how this has all played out over the last two months suggests that Google was jumping in front of a parade that was already well on its way.

"If it was Hollywood vs. the tech companies," says Art Brodsky of the advocacy group Public Knowledge, "it would have been over a long time ago, because the tech lobby is terminally weak and disorganized."

The truth is that the bulk of those objecting to the bill were millions of Americans who use Internet utilities such as Google and Wikipedia and Craigslist.

That said, PIPA is still alive. In his statement, Reid praised Leahy for the work that he’s done thus far on the bill.

"I encourage him to continue engaging with all stakeholders to forge a balance between protecting Americans' intellectual property, and maintaining openness and innovation on the internet," Reid wrote.

But it does look like PIPA won't go ahead without fundamental rethinking. Is it naive to see the events this week as evidence that a networked populace might really have the ability to upgrade its country's politics?

"Everybody retains their constitutional right to be foolish," says Wyden. "But I hope so."