The "appeasement" parrots of the GOP

Except for Ron Paul, the Republican candidates target the president with their own ill-informed policy 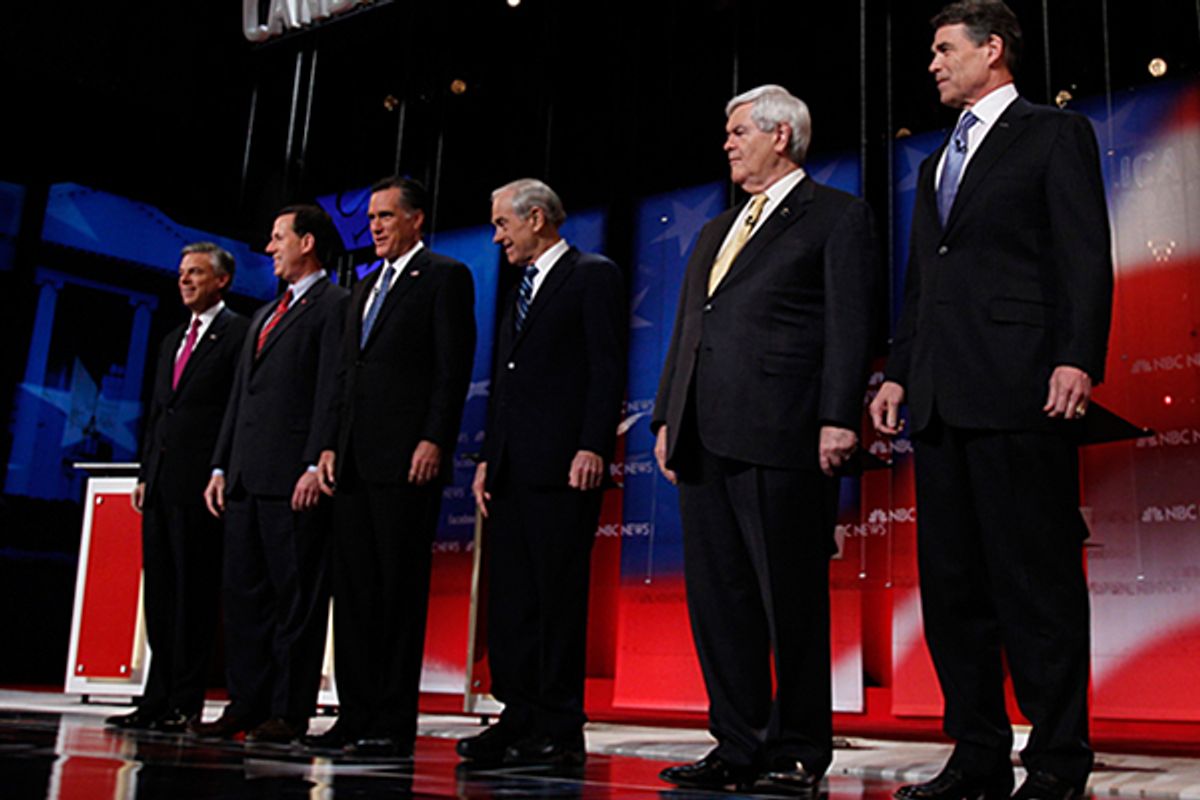 LIned up against Iran (Reuters)
--

With the country still struggling to pull itself out of an economic recession, foreign policy has not rated the highest among issues discussed by the Republican presidential candidates. But among those foreign policy issues that have been debated, one has dominated the agenda: Iran. And other than Ron Paul, the candidates have arrived at the same verdict on President Obama’s Iran policy: It is appeasement.

Speaking at a forum last month, the candidates lined up to launch the charge at Obama. “For every thug and hooligan, for every radical Islamist, he [Obama] has had nothing but appeasement,” said former Sen. Rick Santorum. “Internationally, President Obama has adopted an appeasement strategy,” said former Gov. Mitt Romney. In September, standing alongside hard-line supporters of Israel’s settlements, Texas Gov. Rick Perry similarly condemned the administration’s “Middle East policy of appeasement” -- at almost precisely the same moment that Obama was delivering a speech defending Israel at the United Nations and demanding that Iran meet its nuclear treaty. In late December, Newt Gingrich said on an Iowa radio program, “You have an Obama administration who’s dedicated to appeasing our enemies and dedicated to giving away our secrets.”

It’s not a particularly surprising line of attack. “Appeasement,” with its obvious reference to British Prime Minister Neville Chamberlain’s capitulation to Adolf Hitler at Munich in 1938, is probably the single most overworked accusation in the conservative foreign policy lexicon, a free-floating, no-evidence-required assertion of weakness and surrender. The charge has become so unmoored from any actual historical context that many who use it are not even aware of its provenance. During the 2008 presidential campaign, "Hardball’s" Chris Matthews famously humiliated right-wing shout radio jock Kevin James by repeatedly asking what had actually happened at Munich, to which a red-faced James could only repeatedly scream, “Appeasement!”

One can disagree with the Obama administration’s two-track approach of engagement with and pressure on Iran. But to describe that approach as “appeasement” is to declare oneself desperately in need of a dictionary. The Obama administration has overseen the adoption of some of the most stringent multilateral sanctions ever on Iran. It has undertaken unprecedented defense cooperation with regional allies, including the placing of a NATO missile defense radar system in Turkey, to Iran’s continued outrage. And the administration successfully facilitated the appointment of a special U.N. human rights monitor for Iran to track the regime’s continued abuses.

Iranian President Mahmoud Ahmadinejad’s recent jaunt through Latin America, intended to combat the perception that Iran is increasingly isolated, was a bust, long on photo ops and statements of solidarity from the likes of Hugo Chavez, but short on actual measures that might help Iran out. The Wall Street Journal reported Tuesday that Iranians’ efforts to protect their savings from rampant, sanctions-induced inflation by offloading rials for more stable currencies had gotten so bad that Iranian authorities cracked down on the practice.

There is a legitimate argument to be had over whether the punishing measures taken by the international community will actually push the Iranian government toward a compromise on its nuclear program, which it insists is for peaceful purposes, but about which the International Atomic Energy Agency continues to have troubling unanswered questions. At the very least, though, one would think that enacting such measures would inoculate the administration from the charge of being weak on Iran. But no, some of Obama’s conservative critics have gone so far as to redefine appeasement as simply the act of talking to one’s adversaries, as columnist Charles Krauthammer did when he insisted that the administration’s efforts at negotiations with Iran “did nothing but confer legitimacy on the regime.”

In reality, talks with Iran have served as a force multiplier for other efforts to put pressure on Iran over its nuclear program. As one Israeli defense official told me for an article last year, the Israelis themselves were very skeptical that talks with Iran would have any benefit, but now recognize that the effort “contributed to building international consensus” around the problem. Negotiations have actually done the opposite of conferring legitimacy on the regime -- they made clear to the world, and to the Iranian people, that the Iranian government, not the U.S., was the central obstacle to a resolution, thereby facilitating further sanctions. On Monday, Nicholas Burns, the under-secretary of state for political affairs during the George W. Bush administration, told MSNBC’s Andrea Mitchell that “Iran is probably more isolated today than the day that President Obama took office.”

Conservative mendacity aside, it’s worth looking at what former British Prime Minister Winston Churchill, the patron saint of the anti-appeasement crowd, had to say about it. “The word ‘appeasement’ is not popular, but appeasement has its place in all policy,” Churchill told an audience in 1950. “Make sure you put it in the right place. Appease the weak, defy the strong.” Returning to the theme later that year, he noted that “Appeasement in itself may be good or bad according to the circumstances.”

It should come as no surprise that the views of Churchill the man are quite a bit more nuanced than those of Churchill the Neocon Dashboard Saint, but what might this mean with regard to Iran? It means remembering that, despite the significant self-inflicted setbacks created by our invasion of Iraq, the U.S. is still dealing from a position of considerable strength against a weaker power in Iran. The U.S. has by far the largest military in the world, with an annual defense budget of over $700 billion, while Iran spends around $9 billion per year.

This certainly doesn’t mean that the U.S. should acquiesce to an Iranian nuclear weapon, but it does suggest that the U.S. and its partners should at least consider making explicit what was implicit in the proposed 2009 deal on fuel for the Tehran Research Reactor: a recognition of Iran’s right to domestic enrichment in exchange for the complete satisfaction of the IAEA’s concerns, and a commitment to ongoing verification. At the very least, talks should continue to be pursued in the hope of establishing some line of regular communication between the U.S. and Iran as a way to calm tensions, which are running high over Iran’s provocative threats to close the Strait of Hormuz, and the assassination of another Iranian nuclear scientist.

Finally, as we face a new round of calls for preventive war against Iran, from many of the same people who advocated preventive war against Iraq, it’s very much worth remembering that the Iraq war provided a greater strategic benefit to Iran than any “appeasement” conceivably could. Some of those gains have been lost in recent years, partly as a result of the Arab Spring, partly as a result of the Obama administration’s hard diplomatic work, and partly because of Iran’s own incompetence and belligerence. Clearly, Iran continues to represent a challenge to the U.S. and its interests on a number of fronts, but it’s important to keep that challenge in perspective, and not allow ourselves to be marched into another ruinous military adventure with unforeseeable consequences through the ridiculous idea that anything short of war is  “appeasement.”