The latest GOP assault on the 99 percent 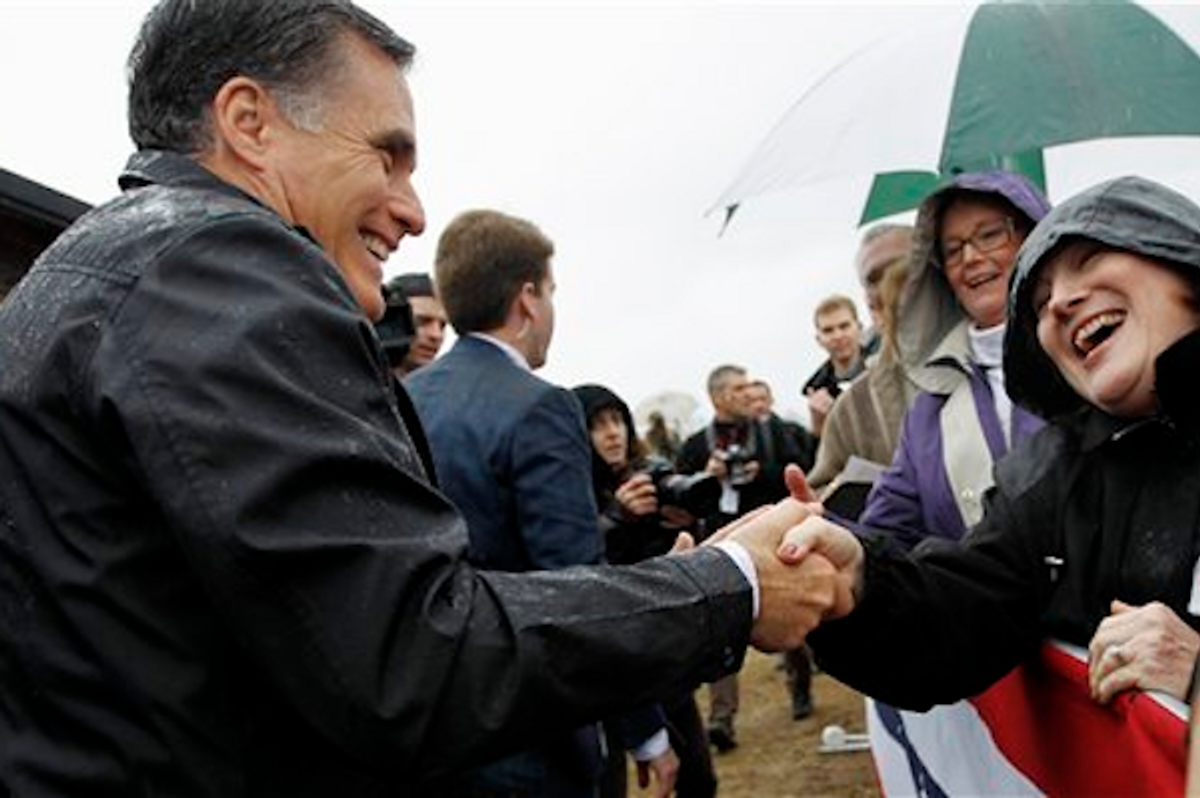 On the South Carolina campaign trail Tuesday, a questioner at a Chamber of Commerce forum asked Rick Perry what the National Labor Relations Board would look like if he were President.  For today’s GOP, that’s the equivalent of a slow pitch over home plate, and Perry knocked it out of the park: “There wouldn’t be one.”  As Slate reported, “The crowd lit up at that.”

Perry’s headed back to Texas, having dropped out just days before the primary.  But NLRB-hatred is still going strong.  Newt Gingrich, who just took the lead in South Carolina polls and received Perry’s endorsement on Thursday, told the same Chamber of Commerce crowd that he would defund the NLRB if he were Speaker again, and is  researching whether he could unilaterally eliminate it as president.  Supposed moderate Mitt Romney calls the NLRB an “unaccountable and out-of-control agency.”  His first South Carolina ad following the Iowa Caucus accused Obama of packing the Board with “union stooges.”

It’s not by accident that South Carolina has become Ground Zero for NLRB-bashing.  The South Carolina primary has a reputation as a GOP establishment stronghold, and a hotbed of racial and religious reaction (the two are not exactly contradictory).  But Tea-Partying Governor Nikki Haley made clear in April what she’d be judging GOP candidates on.  “I would absolutely love to hear what their stance is on the National Labor Relations Board and what they’ve done to Boeing and what they are going to do as head of our country in dealing with these labor unions on right-to-work states,” Haley said after a press conference last April.  Expressing “concern” wouldn’t cut it, she warned.  “How are you going to stand up for these companies?  How are you going to stand up against the unions?”  The candidates took the hint.  That includes Romney, who made attacks on the NLRB a centerpiece of his successful bid for Haley’s endorsement.

Given South Carolina’s famed success in picking Republican nominees, Haley has played an outsized role in making the NLRB, which has long inspired ambivalence from labor activists and indifference from most Americans, a punching bag for GOP contenders.  But that’s not the whole story.

The NLRB was created in 1935 by the National Labor Relations Act (the NLRA, or “Wagner Act”), a New Deal response to a wave of aggressive labor organizing and strikes.  The Labor Board is charged with enforcing employers’ and unions’ compliance with the Wagner Act – including the anti-union Taft-Hartley amendments Congress added in 1947.  With regional boards whose decisions can be appealed up to the five NLRB members appointed by the president, the NLRB acts in some ways on a parallel track to the main US court system – though the law severely limits the remedies it can use to punish corporate wrong-doing.

Although the Labor Board often fines or forbids unions that seek aggressive action against the 1 percent, and regularly leaves workers waiting for years to get their jobs back after being fired for organizing, Republicans are on the warpath against the agency.  Larry Cohen, President of the Communication Workers of America, says that shows Republicans have become “a party that panders to union-busting,” and “a party of the 1 per cent.”

The NLRB didn’t earn the rage of Romney and company by taking money from the rich and giving it to the poor.  It did so through moves – however modest – that could make it easier for the 99 percent to take away power from the 1 percent.

Boeing: Do Big Companies Have to Follow the Law?

The NLRB case of the century was the Labor Board’s investigation of Boeing, the aerospace giant, for illegally retaliating against union members for going on strike.  If you’ve been getting your news from Fox News, or many of its “mainstream” competitors, you’ve heard this was the case where the NLRB tried to punish South Carolina for passing a “Right to Work” law years ago.  Newt Gingrich charged on Meet the Press that the NLRB was “basically breaking the law to try to punish Boeing and to threaten every right to work state.”  In reality, the case was about punishment of workers in Puget Sound, Washington, not of voters in South Carolina.

In 2009, following the fourth strike in two decades, Boeing executives announced that, for the first time, the company would build a new line of airplanes at a new facility in South Carolina rather than at its existing plant in Puget Sound.  Suspicious as that timing alone may be, if the story had ended there, there’s little doubt that Boeing would have gotten away with it.  But executives came out and said – repeatedly, and on tape – that the strikes were their reason for rejecting Puget Sound for the additional work.  When I met with Puget Sound workers last summer, they were divided over whether the company’s comments were a screw-up (accidentally admitting to a crime) or a screw-you (intentionally emphasizing to workers who’s the boss).  Either way, says University of Texas law professor Julius Getman, Boeing “basically announced that they had performed an unfair labor practice” by denying employees the new work because they had gone on strike.

Their union, the International Association of Machinists (IAM) brought charges against Boeing.  After a year-long investigation, the NLRB’s General Counsel (the Board’s top prosecutor), filed the equivalent of an indictment (a “complaint”) against the company, sparking Republican fury.  The legal basis of the case was unremarkable, but unlike most NLRB cases it could have ended in a truly costly remedy for the company: being required to build a line of airplanes back in Puget Sound.  Republican presidential candidates seized on the chance to curry favor in South Carolina and charge Obama with conspiring with big government against the “Right to Work” state.  Their GOP colleagues in the House of Representatives demanded that the General Counsel testify before them about the case and turn over internal documents related his legal strategy.  They passed a bill that would amend the Wagner Act so that a company that transferred work to a new location could never be required by the NLRB to send the work back – even if the NLRB found that the company had moved the work as an anti-union tactic.  And they threatened to eliminate the NLRB’s funding over the case.

Before the case could reach the full NLRB, the General Counsel dropped the case at the request of the IAM, which had reached a deal to keep some future work in Puget Sound as part of a new contract agreement with Boeing.  But as Republicans have been showing on the campaign trail, they don’t plan to stop flogging this one any time soon.

New Election Rules: How Long Should You Get to Terrorize Your Employees?

While most of the NLRB’s caseload, like the Boeing case, consists of applying existing law, that’s not usually how it makes headlines.  When the NLRB is in the news, it’s usually for changing the rules – either through issuing precedent-setting decisions (like the Supreme Court does), or directly issuing or amending rules (like the EPA does).  Last year the NLRB made a modest change to the rules governing the elections held to win union recognition – and once again, all hell broke loose.

Unions have long complained about the ease with which companies can game the scheduling of union recognition elections.  Filing frivolous voter eligibility challenges helps management to delay elections, or to convince unions to make other concessions just to get the election scheduled.  More time before voting means more time for management to run an anti-union campaign.  That includes tactics that are perfectly legal – like holding mandatory anti-union meetings, or making ominous “predictions” that everyone understands are actually threats – and illegal tactics that companies often get away with – like firing, interrogating, or spying on union activists.  (These are among the reasons that many unions have given up on the NLRB election process entirely, opting for pressure campaigns demanding companies agree to more democratic election processes instead.)

Last June, the NLRB proposed new rules under which most voter eligibility challenges would be resolved after the election, rather than before.  Mitt Romney warned last month that the change “trample[s] on the rights of workers, the interests of job creators and the rule of law” and “will benefit only union bosses, while preventing employees from making an informed decision about unionization and preventing employers from challenging illegal union activity.”

But unless a very disciplined union is up against a very clumsy company, employers usually know there’s a union drive afoot well before workers ask for a union election.  Big companies like Wal-Mart don’t even wait for warning signs – they run perpetual anti-union campaigns, including screening for union sympathy before hiring.  And the new election rules will still leave plenty of time for an anti-union onslaught after workers formally ask the NLRB for an election.  Last month I listened to a conference call on which one anti-union firm advised employers to expect twenty-four days from when workers file for an election and when it takes place.  In that time, the moderator urged, companies should hold five mandatory anti-union meetings.

The rule change is “not radical in any sense,” says Columbia University political scientist Dorian Warren.  “And who knows how much difference, if any, it will make.”  Nonetheless, Republicans and the Chamber of Commerce raised a firestorm of protest, warning of “ambush elections” in which employers would have no chance to counter union propaganda.  Congressional Republicans pushed bills to mandate longer delays before elections.  Right-wingers, led (once again) by Nikki Haley, called for the Board’s Republican member, Brian Hayes, to resign.  Though the NLRB is supposed to have five members, for most of last year it was down to three (Reason: Republican obstruction? Check!  Democratic abdication?  Check!).  The Supreme Court has ruled that the Board can’t issue decisions without at least three members, so a resignation by Hayes would have effectively shuttered the agency.  Nonetheless, he publicly toyed with the idea before ultimately announcing he would stay at his post.  So the rule-change passed – though by then several aspects of the original proposal (like requiring employers to provide unions with more contact info for workers) had been removed.

Republicans have passed a bill to circumvent the new rules through the House, and the Chamber of Commerce has filed a lawsuit against the NLRB’s move in federal court.

There’s More Where That Came From

If there’s one thing that connects these right-wing furies, it’s this: Investigating Boeing and tweaking union election rules both make it easier – if only a little – for the 99 percent to stand up to the 1 percent.  That’s enough to set the GOP contenders on fire – though their real goal, rather than a non-existent Labor Board, is likely one that keeps restricting militant actions by workers but lets their bosses entirely off the hook.

Even after Brian Hayes decided not to step down, the NLRB faced potential paralysis at the end of 2011, when one of President Obama’s recess appointments expired.  Many union activists were pleasantly surprised when Obama, who took over a year to deploy recess appointments to fill NLRB vacancies earlier in his term, made three such appointments January 4.  With a five-member NLRB, a devoutly anti-labor GOP, and a raging national debate over labor rights, expect the Labor Board to make headlines for as long as there’s a Democratic president.