The power of conservative victimhood 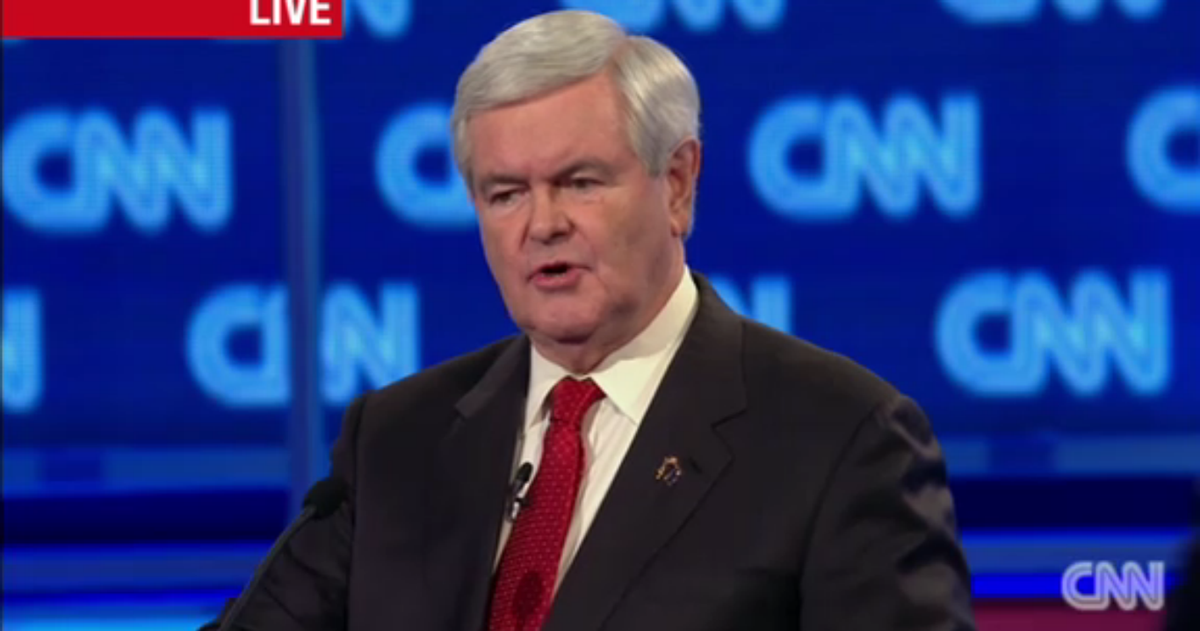 If Newt Gingrich does pull off a victory in South Carolina on Saturday, he'll owe it to the skill with which he has tapped into the right's persecution complex this past week -- and to some  helpful debate moderators.

The final pre-South Carolina debate Thursday night ran for two hours and featured several sharp attacks on Gingrich. Mitt Romney, for instance, ridiculed Gingrich's frequent claims that he worked closely with Ronald Reagan in the 1980s, noting that Reagan's published diary offered just one dismissive mention of the Georgian. Rick Santorum, meanwhile, depicted Gingrich as an erratic and unreliable leader. "Grandiosity," he declared, "has never been a problem with Newt Gingrich." (In a response that we'll probably see a few more times on cable news shows Friday, Gingrich admitted that "I think grandiose thoughts.")

But it seems doubtful any of this will really matter for much , because Gingrich may very well have won the debate before it was five minutes old.

The question hanging in the air when the candidates took the stage was whether and how the interview that Gingrich's second wife, Marianne, just gave to ABC News would be addressed. The interview had hijacked Thursday's political conversation, with ABC teasing salacious details -- like Marianne Gingrich repeating on-camera for the first time her claim that Newt had asked her for an open marriage after revealing his affair with Callista -- throughout the day and promising to run the full version on "Nightline" after the debate. Would moderator John King bring it up? Would one of Gingrich's rivals? Or an audience member? Or maybe the former speaker himself? Or maybe somehow it wouldn't come up at all.

The suspense evaporated when King used the first question of the night to ask Gingrich if he'd like to respond to his ex-wife's words.

The live audience applauded loudly. It was obvious right away they had his back. Clearly, Gingrich was ready for King's question, but he did his best to feign shock and outrage.

"I think the destructive, vicious, negative nature of much of the news media makes it harder to govern this country, harder to attract decent people to run for office, and I am appalled that you would begin a presidential debate on a topic like that," he thundered.

At this there was a standing ovation. "Is that all you want to say, sir?" King asked. It was not. Gingrich went on to say that raising the subject was "as close to despicable as anything I can imagine” and to pronounce himself "frankly astounded that CNN would take trash like that and use it to open a presidential debate.” When King protested that the interview had originated at another network and that it had become a major subject on the campaign trail, Gingrich cut him off and roared: "I am tired of the elite media protecting Obama by attacking Republicans." The crowd was roaring now. It was the strongest reaction they'd have all night.

It's no mystery why the audience of Republicans so instinctively and passionately rallied to Gingrich's defense. His final line was the key: That the liberal media is out to get Republicans and will stop at nothing to destroy them is an absolute article of faith on the right. It's why so many conservative leaders claimed that Herman Cain was the victim of a liberal smear when he was confronted with sexual harassment charges in November. Never mind that the conspiracy theory made no sense (why would liberals take down a candidate they'd love to face in the general election?); logic has little to do with this. Likewise, the left would be thrilled to face Gingrich next fall, but that didn't stop Rush Limbaugh from arguing on Thursday afternoon that the Marianne Gingrich interview was part of a media plot to take out the former speaker.

What Gingrich did brilliantly on Thursday night is to articulate this paranoid victimhood in a clear and compelling (for his audience, at least) way. It's the same basic trick he pulled in this week's other debate, when he connected with another strain of the persecution complex: that honest, taxpaying Republicans are the victims of a dependency class of poor people and minorities that Democrats intentionally enable. Thus did Monday's crowd rejoice when Gingrich insisted to Fox News' Juan Williams that there was nothing remotely insulting about his statement that the NAACP should be asking for paychecks instead of food stamps, or his suggestion that children in poor neighborhoods don't understand the value of work.

Gingrich seems within striking distance of a South Carolina victory. A poll from PPP released just after Thursday's debate showed him holding a 6-point lead over Romney for the second straight night. Channeling conservative victimhood on Monday was a smash hit for Newt, and his Thursday night sequel may be remembered the same way.