My husband and I may seem strange for wanting multiple partners. To my kids, this is what normal looks like 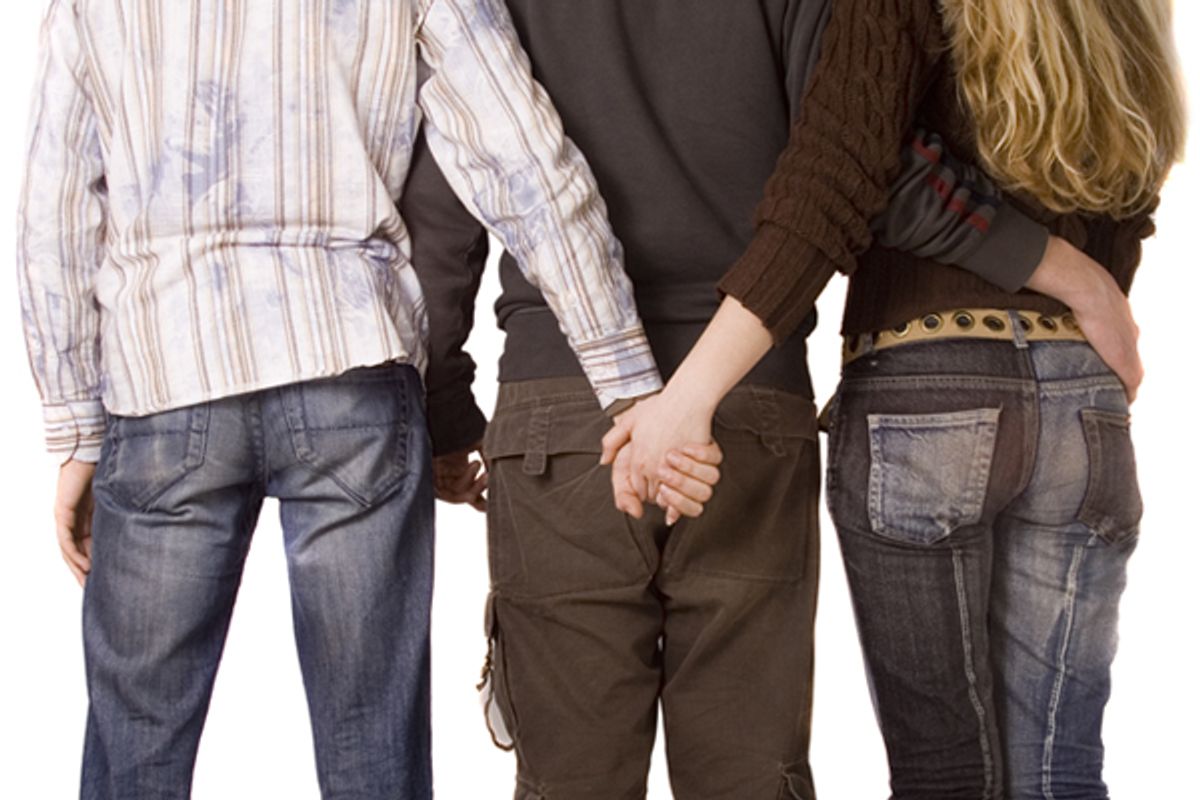 I spent a recent weekend up in Maine with my girlfriend and our three kids. We went on long canoe trips, made mountains of buttery waffles, and read Rainbow Fairy books aloud till the words blurred together on the page. When the kids had gone to bed and the house was quiet, we crawled into bed and had sex so hot I thought the sheets might catch fire.

When I got home, I told my husband all about it.

My marriage is open. It’s also happy and stable. After I shared our mountain adventures, he filled me in on the highlights of his weekend: a small triumph at work, some quality time with his girlfriend, a successful home repair. We curled up at the end of the night, watched some old "Dr. Who" episodes and went to sleep in each other’s arms.

I never thought I’d have anything in common with Newt Gingrich. But if the claims that he once asked his ex-wife, Marianne, for an open marriage are true, then we might be more alike than I thought. Unlike that alleged scenario, however (which began with an affair), my husband's and my open marriage has been based on openness and honesty from day one.

In fact, I’ve never been in a monogamous relationship. This openness in my romantic life stems in part from feminism and in part from idealism. I’m passionate about owning my own sexuality. I can’t stomach the thought of handing the reins of my sexual life to someone else, even someone I love and trust as much as my husband.

I’m also passionate about sharing. Being open in my marriage comes from the same ideals that make me shop at the food co-op and vote for socialist political candidates. If I were 30 years older, I’d be a veteran of the '60s free love movement, staging bed-ins with my antiwar buddies. I embraced nonmonogamy, or polyamory as the cool kids like to call it, because I’m good at it. I’m prone to falling for people; my girlfriend likes to say I fall in love with lampposts. I’m good at communication and mediation. I’m bad at rules. Clearly, polyamory was for me.

When I got married and started a family, I just kept doing what I’d always done.

While some people leave polyamory behind with their wild youth, there are large numbers of families that quietly continue to embrace this life while raising kids and growing old together. Some of them form households with several adult “spice” (a humorous plural of spouse). More commonly, they do what I do: live with one spouse, whom they raise kids with, and step out for date nights with other lovers.

We’re largely invisible. When I pick my girlfriend’s daughter up at school, I don’t tell the teachers I’m dating her mom. I just sign the pick-up form and head home.

Nothing in my life is a secret, it’s simply my private business. When it does come up, people tend to be very accepting, but also curious. Don’t you get jealous? What about the kids? How does that even work?

My life sounds complicated, but in many ways it’s routine. The children are the main focus of our attention. My husband and I have three kids. We spend a lot of our time doing the things any parent does: picking the kids up from school, shuttling them to and from activities and birthday parties, cooking them dinner and reading them bedtime stories.

Since we’ve always been poly, I often wonder how monogamous couples do it. I get so much support from my lovers. No one else, not my friends, not my parents, no one, is as willing to deal with the messes and mishaps of parenting as my sweeties. There’s something about romantic intimacy that builds a family-type closeness. These are the people I call when I’m puking my guts out and can’t take care of my kids, the people who call me when their car gets towed and they need a rescue.

Polyamory enthusiasts like to point out that the word means “multiple loves.” They really want to stress the loving commitments people make, the way these networks of relationships support each other. It’s not about the sex, you hear over and over again.

This always makes my girlfriend and me giggle. Here's a tip: It’s about the sex. If it weren’t, we’d be close friends and I wouldn’t be writing this article. The sex isn’t a bad thing: In fact, sex outside a marriage can be good for you. There’s a pile of scientific evidence showing that a new sex partner is the most surefire cure for sexual dysfunction and low libido, especially for women.

It’s much easier to keep the sparks flying with someone whose laundry you don’t have to fold. Having an outside partner means getting to date endlessly: an endless string of exploring new restaurants, trying new positions, long wandering conversations that don’t involve fights about the cost of day care or nagging reminders to take the trash out.

That’s hot. I get all the excitement of an outside love affair – the wild sex, the sympathetic ear, the chance to fall in love all over again – without the bitterness of betrayal.

This is a blessing and a curse. At its best, it makes everyone’s life better. At its worst, this kind of arrangement can sap energy from a struggling marriage. It’s easier to have fun with a lover than it is with a spouse that you can slip into the habit of playing only outside your marriage. One friend said, after watching his wife tart up to go out with her new boyfriend, “I used to be the lingerie guy. When did I become the pajamas and cornflakes guy?”

It can also be a challenge for the outside relationship. Remember that idyllic weekend my girlfriend and I had? We’ve been dating for three years. Eventually, many people who like each other as much as we do get married. Not us -- we’ll be going out to dinner on Tuesday nights until the end of time. That's a lot of dates. She’ll never be my pajamas and cornflakes buddy.

Now, to the jealousy question: If the thought of your lover being with someone else makes your stomach turn, polyamory probably isn’t for you. Most poly people feel jealous sometimes, but they treat those feelings as a sign of a problem in their own relationship. If I’m jealous because my husband has his girlfriend sleeping over three nights this week, I’m inclined to look at how I’m getting – or not getting – my needs met in my relationship with him. It’s not his sleepovers with her that are the problem, it’s that we haven’t had enough time together lately.

That’s not the case for everyone, though. Some people – maybe most people - really are jealous simply because their honey likes someone else. Their jealousy isn’t an arrow pointing at another problem that can be worked out. It’s a sick feeling in their gut telling them this is not the right relationship to be in. If you feel like that, do yourself a favor and hightail it back to monogamy.

That isn't the real issue with polyamory, though. I once spoke on a polyamory panel. When an audience member asked what the biggest downside was, all the panelists shouted in unison: “Scheduling!”

That was back in the dark ages, before smartphones and Google calendar. These days, scheduling kinks get ironed out by technology. I can use IM to stay close to all my loves while I’m running through a busy day, hopping from work to school to home. Text messages let us communicate on the run, and online calendars make it much simpler to see when everyone is free.

Then there’s the issue of secrecy: What do you tell the children? What will the neighbors think?

Some of my friends are poly activists. They wear buttons, write magazine columns, march in parades. They want more visibility for our lifestyle so that, like our queer allies, we can be less closeted about who we are. Me, I’m content to keep a fairly low profile. Nothing in my life is a secret, but I don’t usually advertise the details to strangers.

To my kids, this is all normal. I’ve never had a big sit-down talk about how Mommy and Daddy’s marriage is different. They were born into this. We’re a big messy family. The kids know I go on grown-up sleepovers sometimes, and take it for granted.

Because we live in a major urban center with a large poly community, we’re able to hang out with other poly families a lot of the time. That helps provide community support for the adults, as well as making it seem more normal for the kids. I can go to a BBQ with my husband and our kids, spend half the time holding hands and chatting with my girlfriend, and no one will bat an eye.

Polyamory is not for everyone. Many people, probably even most people, prefer the simplicity of a monogamous marriage.

But a lot of people want something else. About half of married people will cheat during their lives. Another substantial minority – anywhere from 1 percent to 10 percent, depending on which expert you ask – are having intentionally open relationships. It takes a lot of emotional energy, and an ongoing commitment to complexity, to make those relationships work. But I wouldn't do it any other way.

Sierra Black lives in the Boston area with her family. She is a frequent contributor to Babble, and blogs about her family life at Childwild. She and her husband will celebrate their 10th anniversary together this year.