Urban gardens: The future of food?

It\'s easy to make fun of, but as more and more farming moves downtown, eating local is taking on a new flavor 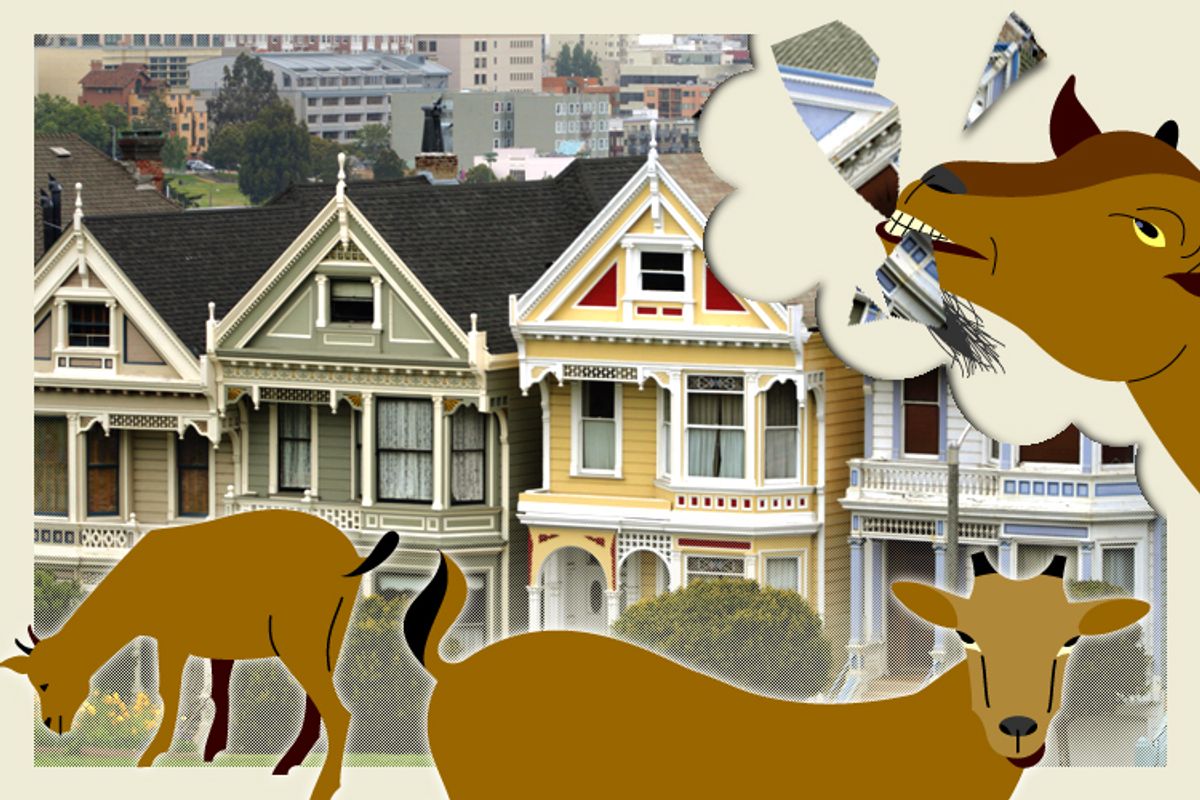 With penny-farthings, handlebar mustaches and four-pocket vests back in fashion, the rise of urban farming should just about complete our fetish for the late 1800s. Today, you can find chicken coops on rooftops in Brooklyn, N.Y., goats in San Francisco backyards, and rows of crops sprouting across empty lots in Cleveland.

That it fits so snugly into the hipster-steampunk throwback trend is what makes urban farming ripe for ridicule. ("Portlandia" has taken a crack or two at it.) But could city-based agriculture ever make the leap from precious pastime to serious player in our cities' food systems -- not just for novelty seekers and committed locavores, but for the Safeway-shopping masses?

"I don't want to make a statement like, 'This is the future of farming,'" says Gotham Greens co-founder Viraj Puri, sitting at his laptop in Greenpoint, Brooklyn, steps away from hundreds of rows of butter lettuce. "It's probably never going to replace conventional farming. But it has a role to play."

If the greenhouse we're sitting in is any indication, that role looks nothing like the 1800s.

Gotham Greens is a 15,000-square-foot hydroponic farm on the roof of a Brooklyn warehouse. It had its first harvest in June, and expects to produce 100 tons of food per year. The crops (mostly lettuce) grow in rows of white plastic tubing, their roots massaged by recycled water, under grow-lights and fans controlled by a central computer system. The system collects data from sensors throughout the room and adjusts the environment accordingly. This pampered produce will eventually end up on restaurant menus and shelves at stores like Whole Foods.

Two years ago, Forbes predicted that by the year 2018, 20 percent of the food consumed in U.S. cities will be grown in places like this. It's safe to say that's almost certainly not going to happen. Right now, urban-grown produce represents a minuscule slice of the food system. But there are several plausible scenarios that could make such food more commonplace in the city kitchen of the future.

Several of these scenarios are growing more likely by the day. If energy prices spike, your average grapefruit's 1,500-mile journey to your fridge could make local food seem cheaper by comparison. Droughts are becoming more common, and soil-free hydroponic agriculture uses a fraction of the water of conventional farming and can easily be set up in urban environments. And there's always the unforeseen Black Swan event: World War II "victory gardens" made urban farming a temporary reality for millions in the early 1940s.

But even if these scenarios came to pass, wouldn't it still make more sense to grow on cheaper land just outside city limits, rather than right in the bustle of the city? Depends which city you're talking about. Money manager John Hantz has spent the last few years putting together plans for a massive farm right in Detroit -- not just to grow food, but to boost land values in general. "We need scarcity" in Detroit, he told Fortune magazine. By which he means, depopulated Detroit has way too much land. Turning hundreds of acres of the city into farmland, his theory goes, would make land scarcer (and greener), which would raise real estate values. It would also take dilapidated properties off the city's hands. It's a fairly wild scheme that some suspect is nothing more than a real-estate land grab. Still, Hantz has the city's interest piqued.

There's another reason to grow food right in the city. Puri says he and his partners chose Brooklyn for lots of reasons: to help create jobs, to green the area, and to avoid a commute to the country. "We didn't select Brooklyn because it was cool," he insists. But Brooklyn is cool -- if it wasn't, it wouldn't be used as a brand by all kinds of companies, from salsa to beer to the ubiquitous hoodies. And until we sail past peak-oil or face a water crisis, for many people, the main appeal of buying veggies grown in the city is that they're vegetables that were grown in the city. That holds whether that city is Brooklyn, Seattle or Montreal. Which is why the Gotham Greens' packaging is emblazoned with some version of the phrase "New York City" no less than three times -- four if you count the word "Gotham" itself.

Because the fact is, locavorism is something people are willing to shell out for, and you can't get more local than across the street. But agriculture that's that local is also something others want nothing to do with. In November's municipal elections in Vancouver, urban farming became a political wedge issue used by the center-right NPA opposition party, which ridiculed public monies proposed for wheat fields and chickens. The funding was minimal (and some of it was never spent), but it didn't matter -- urban farming itself was held up as a loopy liberal lifestyle being subsidized by the city.

"The same people who were opposing the wheat field and chickens were opposing the bike lanes in Vancouver, too," says Peter Ladner, who actually led the NPA as a mayoral candidate four years ago. He's since become an advocate for urban agriculture, and says the issue, like bike lanes, is becoming a cultural battle that's bigger than urban farms -- it's about the definition of progress. "We have a large Asian population in Vancouver, and there's a big concern [about urban farming] among immigrants who are moving here from places where there are chickens and pigs running around," he says. "They moved here to upgrade their lives and live a sophisticated urban existence. They're like, 'Why are we going back to this?' For a lot of people, progress means getting a nice, smooth lawn."

"The people who are idealizing urban farming have a choice -- a choice between grocery stores and greenmarkets, between cars and bicycles," says Richard Longworth, a senior fellow at the Chicago Council on Global Affairs. Last year Longworth wrote a provocative piece for Good magazine titled "Forget Urban Farms. We Need a Walmart," blasting the idea that such farms can spur an economy like traditional businesses can. "What I object to is the hyping of their reality and potential," he says. "There are a lot of people in this country who simply hate megafarms, but those folks are feeding the world. Locavore agriculture isn't going to change that."

That may be true. But urban farming may carve a path to sustainable success by creating a new type of subsystem within the larger food system -- one that's bigger than boutique but smaller than Big Agra. A company called BrightFarms is pioneering a method that aims to do just that -- one that takes place directly above the stores that sell the produce it grows. BrightFarms builds greenhouses on supermarket rooftops and manages the growing operations for free. In return, the store below signs a long-term contract agreeing to buy the food that's produced. BrightFarms estimates it can harvest up to 900,000 pounds of produce annually per acre. It's a solution that seems custom-built for cities, places with plenty of roofs but little ground.

A lack of space on the ground is what might someday make vertical farms a cost-effective reality. But for now, large-scale towers holding rows of corn are strictly sci-fi. Nevertheless, city-based agriculture seems poised for some kind of flowering that's more than a fad. If 2011 was the year that bike lanes became the poster child for the New Urbanism, urban farms could claim that mantle in 2012.