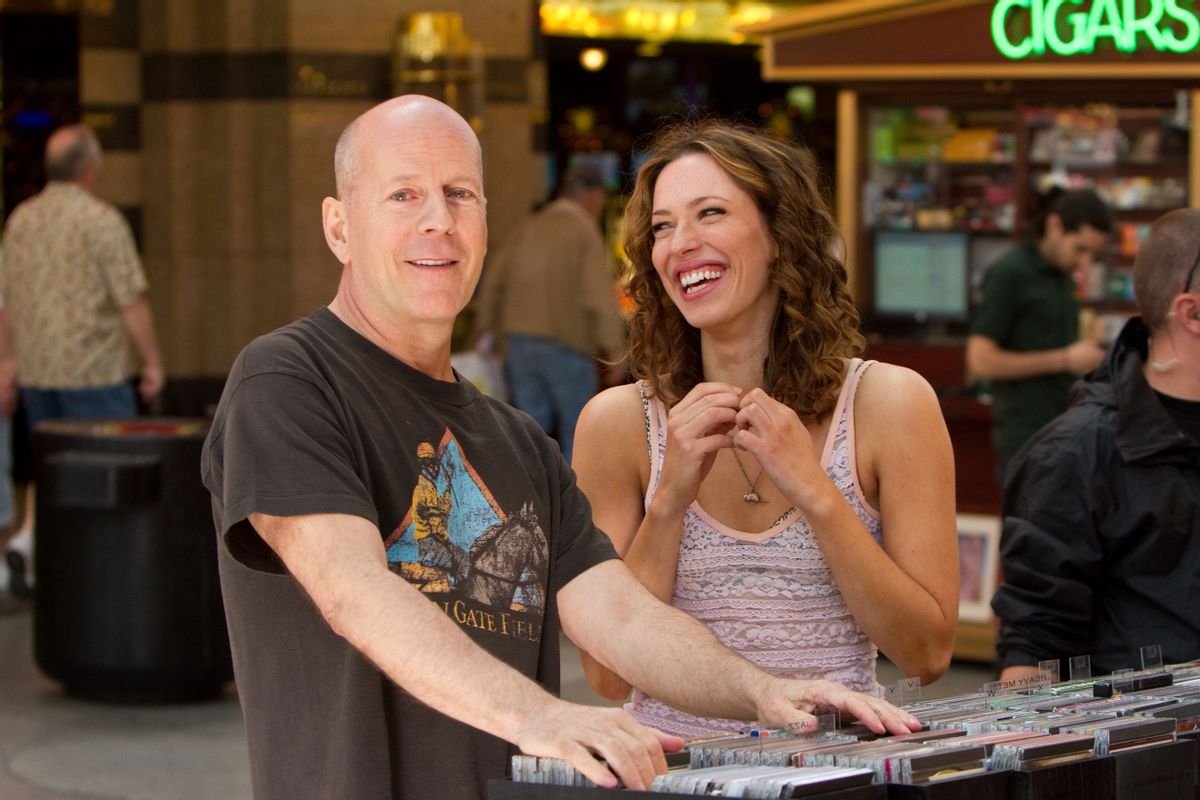 PARK CITY, Utah -- I think the fairest way of summarizing what I have to say about the new Stephen Frears movie "Lay the Favorite" is that people watching it on airplanes next fall will be pleasantly surprised by it. Anchored by an amped-up performance by Rebecca Hall that you'll either find endearing or massively irritating, along with a genial supporting turn from Bruce Willis, this is a mid-level crowd-pleaser, superficial light entertainment delivered by professionals. There are worse things. If you hear people struggling to compare "Lay the Favorite" to Frears' 1990 hit "The Grifters," pay no attention. Those of us who still venerate Frears as a pioneer of British indie cinema in the '80s pine for him to have higher goals than a ditzy true-crime romp, but maybe that's our problem rather than his.

"Lay the Favorite" got the coveted Saturday-night centerpiece screening at Sundance this year, a slot meant to showcase a potential box-office hit. If I were any good at forecasting such things I'd have a different job, but at least this movie fits the bill better than the utterly risible "Red Lights," a hokum-filled supernatural thriller with Robert De Niro, Cillian Murphy and Sigourney Weaver that premiered Friday. Neither movie takes place in anything resembling the real world, but at least Frears doesn't leave talented actors rattling around with no idea what to do. Indeed, he clearly instructed Hall to shed all inhibition and go for it in her portrayal of Beth Raymer, a real-life Florida stripper turned professional gambler who wrote the memoir on which D.V. DeVincentis' screenplay is based. (Raymer herself appeared at the post-screening Q&A, and it appears that Hall's performance is underplayed, if anything.)

I'm in the tank for Rebecca Hall, pretty much, so even though I would agree that she cranks up the sunny, girly, giggly power-of-positive-thinking charm pretty doggone high here, I enjoyed (almost) all of it. Every British actor believes that he or she can play a convincing American, and all too often it just amounts to getting a bad haircut, hitting the R's really hard and chewing gum. Hall is one of the few who can actually do it, and whether you find Beth irresistible or too damn much, you'll recognize her right away. Beth quits her job as a private dancer in Tallahassee -- those early scenes have more sleazy, funny, Frears-ian edge than the rest of the movie put together -- to move out to Las Vegas and become a cocktail waitress. Instead she winds up placing bets and making deliveries for an ex-con named Dink (Willis), a gambler who makes his living trying to outguess the Vegas sports books on football, basketball, baseball, beauty pageants, spelling bees and anything else that involves winning and losing.

Willis is an agreeably growly presence, creeping around Vegas in faded tropical shirts and knee-high white socks -- he's arguably a better actor now that he can't simply rely on charm and twinkle -- but the screenplay calls for Dink and Beth to fall in love, albeit temporarily. Everyone in and around this movie seems understandably skeeved out by that idea, so they (and we) never take it seriously. Their Vegas adventures are recounted with high spirits, bright colors and a moderate amount of laughs, but where Frears was once committed to setting his films in the recognizable here and now, "Lay the Favorite" offers a highly generic, shtick-inflected vision of life in the Vegas gambling economy, and you can feel his attention wandering when it comes to the technical details. He clearly doesn't know or care about either American sports or gambling, which is no crime -- but it might disqualify him from making a movie about a woman with a remarkable head for numbers and a striking ability to outthink the bookies. Steven Soderbergh, for example, could have made a fascinating film out of Beth Raymer's professional odyssey, but for Frears it amounts to a lot of forced humor and people yelling at each other.

There's a regrettable performance by Vince Vaughn as a stereotypical New York bookie, involving an exaggerated Jewish accent and bad reggae dancing; an irrelevant one by Catherine Zeta-Jones as Dink's oft-surgeried wife, whose name is Tulip; and an utterly unnecessary one by Joshua Jackson, as the boyfriend Beth picks up once she leaves Vegas. The last third or so of the film, when Beth first helps run an illegal gambling operation in New York and then an offshore betting shop in Curaçao, is highly perfunctory. Even then Hall is fun to watch, Frears keeps the mood light and cinematographer Michael McDonough keeps the pretty pictures coming. Like I say, at 36,000 feet halfway between Atlanta and Dallas, it'll be terrific.