"Wanted Women": The she-devil and the martyr 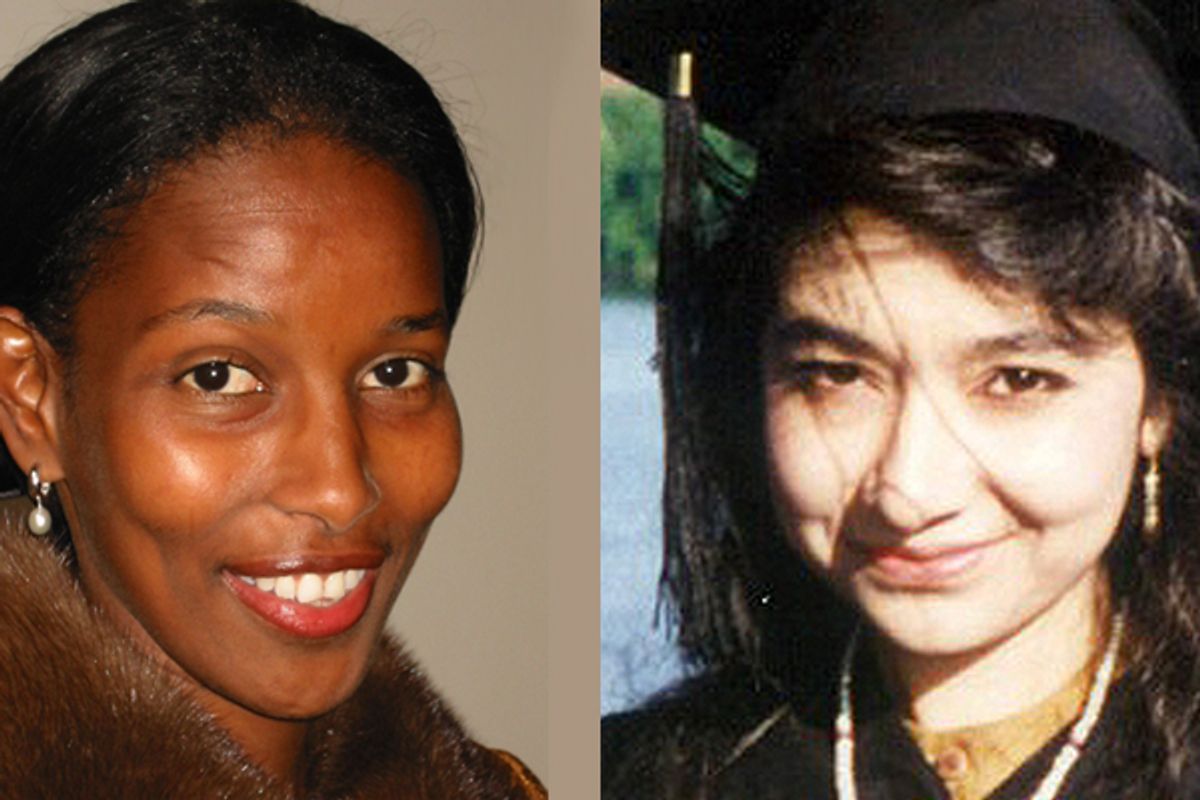 Deborah Scroggins' engrossing new book, "Wanted Women: Faith, Lies, and the War on Terror: The Lives of Ayaan Hirsi Ali and Aafia Siddiqui," is the story of a martyr and a she-devil. Or the story of a she-devil and a martyr, depending on your perspective. However, the author (a prizewinning international journalist) subscribes to neither view. By juxtaposing the lives of two (in)famous women involved with the so-called War on Terror -- a celebrated critic of Islam and the only woman included on the FBI's most-wanted list of al Qaida-linked international terrorists -- Scroggins aims to show how "women like Ayaan and Aafia became symbols in battles that were really about other things."

It should be added that both women eagerly participated in their own symbolification. Ayaan Hirsi Ali, a Somali-born Dutch politician-turned-pundit, has never voiced an intention to become the kind of person who gets paid to say inflammatory things on television. (If she had, Scroggins' dogged reporting would surely have found it out.) But she has pursued that end as surely as iron filings follow a magnet. Aafia Siddiqui, a Pakistani neuroscientist educated in America, worked the jihadi circuit here and abroad, whipping would-be holy warriors into a frenzy by making speeches exhorting them to prove their manhood by attacking the infidels. Her single-minded devotion to such activities wreaked havoc on her family but the price she paid for it made her a heroine in her homeland.

Neither of Scroggins' subjects appears to advantage in "Wanted Women," which is not so surprising when it comes to Siddiqui. She has close ties to the al-Baluchi clan of Khalid Sheikh Mohammed (KSM), the mastermind of 9/11, and she assisted in a failed KSM plot to blow up gas stations in the U.S. Siddiqui is currently serving an 86-year sentence in a federal prison, not for the gas station plot, but for grabbing a rifle and trying to shoot some American soldiers while detained in a police station in Afghanistan. Scroggins, who makes an impressive effort to get to the bottom of a story more murky and ominous than a John le Carré novel, concludes that Siddiqui was "almost certainly plotting murder ... And perhaps prepared to further a biological or chemical attack on the United States on a scale to rival that of 9/11."

For Westerners, Hirsi Ali is a more ambiguous figure. She has been the darling, in turn, of Dutch leftists, Dutch free-market conservatives, American neocons and Anglo-American atheists, but she has also drawn criticism for making simplistic and bellicose statements about the religion in which she was raised. Her primary calling card is her personal story: Born in Somalia, genitally mutilated (by her grandmother, without her parents' knowledge or permission) at age 5, she purportedly fled to Holland to escape a forced marriage. Her mediagenic presence and fiery rhetoric have made her a particularly intoxicating figure for hawkish, anti-Islam commenters like Christopher Hitchens, who rhapsodized about her "arresting and hypnotizing beauty," and Pascal Bruckner, who compared two critics who dared to mildly criticize her memoir to the Spanish Inquisition.

Scroggins can't disguise her distaste for Hirsi Ali, who in this account comes across as a reckless, uninformed and opportunistic showboater with little regard for the real-world consequences of her actions. Hirsi Ali has called for a "war on Islam" ("a destructive, nihilistic cult of death") and predicted that Britain (among other Western nations) will be subject to Shariah law within 50 years if it doesn't look out. She supported the U.S. invasion of Iraq and has urged a similar invasion of Iran, efforts she regards as essential to a campaign against "Islamofascism."

Scroggins tries to make the case that, in the mid-2000s, Hirsi Ali measurably contributed to a political climate in Holland that led to xenophobic prejudice, violence and a deportation campaign prompting the U.N to cite the Netherlands for human rights abuses for the first time in history. She argues that Hirsi Ali's insistence on conflating all Muslims with militant fundamentalists served only to back moderate Dutch Muslims -- the vast majority -- into a corner where they felt forced to choose between their faith and their nation. This, and the rest of her apocalyptic pronouncements, Scroggins and others have argued, played into the hands of extremists by needlessly increasing the resentments that nurture militancy.

How much responsibility Hirsi Ali herself bears for the powder-keg atmosphere in Holland at that time is hard to say. (Scroggins maintains that Dutch politics returned to its more typical sedate and reasonable tenor after Hirsi Ali moved to the U.S.) Without a doubt, she belongs to the ever-growing club of lying memoirists; documentary filmmakers discovered that her tale of a forced marriage was bogus. Also, she was eventually forced to admit that her family never threatened her for running out on the Canadian husband who (under the impression that she loved him) had funded her immigration to Europe.

Of course, women living in patriarchal Muslim cultures are forced into marriages and abused and even killed by their relatives quite often. But Hirsi Ali's feminist critics have complained that she has done little of a practical or material nature to alleviate the suffering of such women or to help them out of dangerous situations. The short film she made with director Theo van Gogh in 2004 -- "Submission," featuring verses of the Quran written across naked female bodies -- ostensibly protested Muslim misogyny. However, it only served to anger and alienate the women it purported to champion, as footage of Hirsi Ali visiting a Muslim battered women's shelter illustrated. An emotionally disturbed Islamist militant murdered van Gogh on an Amsterdam street later that year, triggering a wave of mosque and church burnings.

You can support the free-speech rights of Hirsi Ali and van Gogh while recognizing that "Submission" was largely a self-serving exercise in deliberate provocation, but it's a thin line to walk. So robust is her distrust of Hirsi Ali that Scroggins has a hard time toeing it. Hirsi Ali makes such a captivating character -- like the villainess on a soap opera that you love to hate so much that you end up kinda loving her -- that sometimes Siddiqui gets overshadowed. Like Hirsi Ali, Siddiqui is a self-contradictory zealot. Hirsi Ali believes so ardently in the Western ideals of tolerance and intellectual freedom that she blithely advocates the suspension of civil liberties to "save" them. Siddiqui's commitment to protecting the Muslim way of life led her to routinely transgress the strictures imposed on good fundamentalist Muslim girls. The very name of her religion means "submission," but Siddiqui could not do it; in one of the book's many grimly amusing scenes, she presumes to hotly lecture a venerable religious leader on his mistaken interpretation of her duties.

Although Hirsi Ali and Siddiqui have never met, and Scroggins wasn't able to interview either one of them for "Wanted Women," although there is no obvious connection between the two, the book works astonishingly well. Cutting back and forth between the two stories fosters a considerable amount of narrative suspense, and the juxtaposition of two similar personalities with two very different ideological positions keeps prompting the reader to look beyond easy or knee-jerk assumptions. Scroggins ultimately concludes that both women were "useful to the real drivers of conflict in their countries" because their stories provided political cover. Hirsi Ali's talk of women's oppression justified "Westerners who want to keep the Muslim world under Western rule," and Siddiqui's visible crusade against Western dominance masked the fact that jihadi were (at least in part) "fighting to maintain their control over women."

True enough, but they are also both warriors by temperament, rash and aggressive. (Hirsi Ali has blithely likened herself to a "Somali warlord.") If each gave her side of the War on Terror a female martyr to brandish before the troops, what they got in return was something every warrior needs: an enemy to battle to the death.