Maybe Daniels or Jindal should enter the race next month and we can take this thing all the way to the convention! 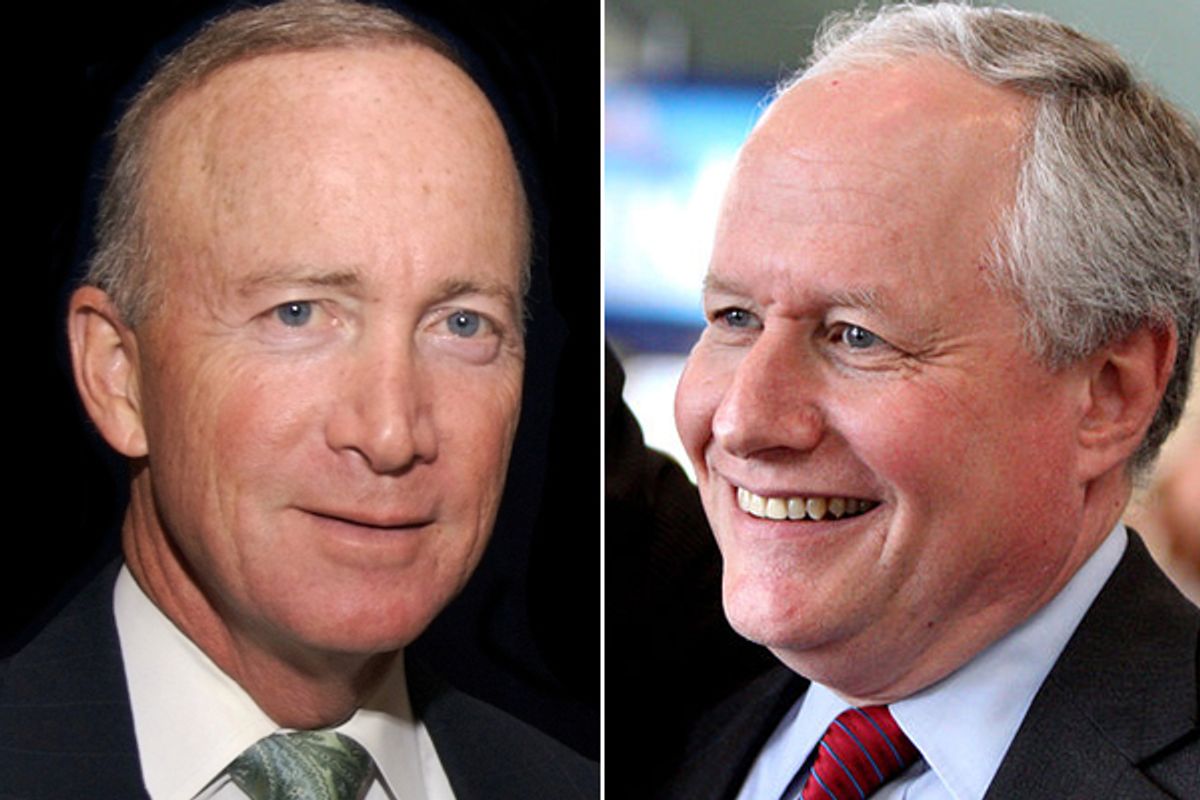 But Newt Gingrich just won the South Carolina presidential primary (South Carolina's new motto: "Picking presidents a couple times since a couple years ago!") and is now amusingly ahead in the early polls in Florida. The conservative elite can attempt to sabotage Gingrich, but the message from the voters is clear enough: Romney is really not particularly liked, at all, and they are willing to vote for literally anyone else who can seem credible on television for a few precious minutes.

Bill Kristol's Weekly Standard was quietly promoting Gingrich since just before his first surge in the polls, and Kristol himself early this morning asserted that of Gingrich, Romney and Santorum, "any of the three could be the nominee." (No, actually, but this is Bill Kristol.) He then quotes an editorial he wrote two months ago, predicting, sort of, "a late January entry [I'd now say an early February entry] by another candidate."

And he ends with: "I notice a new online petition was launched Saturday night to try to produce one possible outcome. It’s at runmitchrun.com."

The idea, still apparently existent, that what this electorate -- having previously paid close attention to statesmen like Donald Trump and Herman Cain before turning to Newt Gingrich -- is clamoring for is the respectable conservativism of Mitch Daniels is fun enough. (You didn't like the former governors of New Mexico or Utah? Try Indiana's current guy -- he's also a former pharmaceutical executive!) Rahm Emanuel himself just teased Mitt Romney by suggesting Chris Christie or Mitch Daniels would've been perfect to run against Obama.

But actually parachuting into the presidential campaign after Iowa, New Hampshire, South Carolina and presumably Florida and Nevada have all voted would certainly be a ... challenge for anyone who doesn't currently already have a massive campaign war chest and experienced national campaign staff. (Though obviously this election is so different, because complete clowns like Gingrich and Santorum can win ... after spending the better part of a year campaigning.)

Ross Douthat is at least realistic about a latecomer's chances (he or she -- well, he -- "would have a necessarily uncertain path to the nomination") but says "it isn’t too late for one of the non-candidates to change their mind and run," which is I guess technically true. A non-candidate could change their mind and run the weekend of the convention, too! I'd be all in favor of it, and I suspect the president would be, too.

Good news, then: "a source tells me that a representative from runmitchrun.com will be on Fox News today at 4:45 p.m. making the case that Daniels gets in the race."

Jennifer Rubin flat-out begs Haley Barbour(!), Mitch Daniels, Bobby Jindal, Jon Kyl, Marco Rubio, Jim DeMint, Eric Cantor, Paul Ryan and Mike Pence to either run themselves or hurry up and close ranks behind either Santorum or Romney -- Jim DeMint's late entry to the presidential race would be good February entertainment, it's true -- which seems to miss the fact that those people have about as much control over the party electorate now as John Boehner has over the Republican House majority.

(Jonah Goldberg should get some credit for being slightly ahead of the curve for once, having posted his slightly tongue-in-cheek version of this plea last Thursday, before Gingrich had even humiliated the probable nominee in South Carolina.)

There is a great deal of point-missing going on. Each of these savior non-Romney Gingrich-killing dream candidates completely lacks the quality that led Gingrich to suddenly take the lead: No one likes him and he's embarrassing. The voters respond to his breezy shamelessness, and Bobby Jindal is not going to fire this crowd up. (Chris Christie, a loud bullying caricature, might do the trick, but he's too smart to enter now.)

I am also not sure how essentially begging for a brokered convention helps alleviate the "chaos" everyone is currently worrying over, but, again, I welcome the entertainment.