Did getting fired kill Joe Paterno?

The Penn State coach always worried he'd die without his job -- and did, just weeks after his scandal-ridden exit 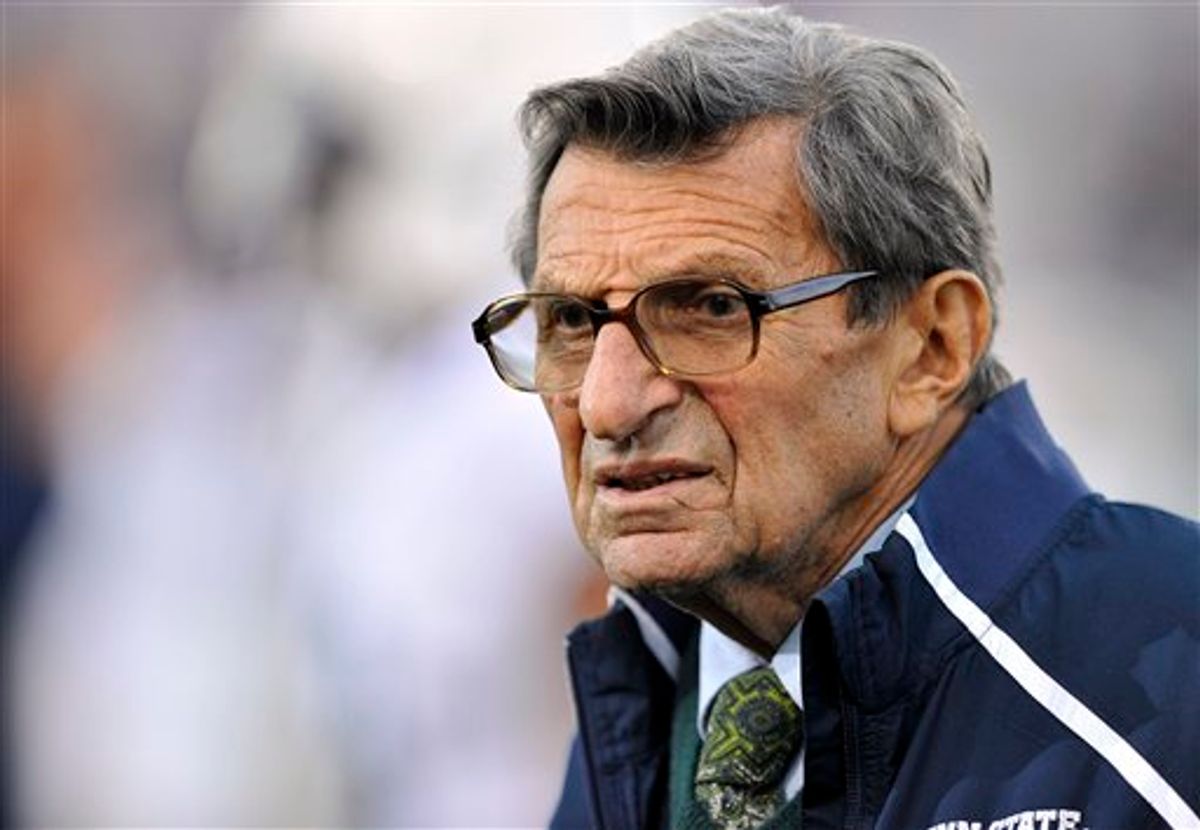 Prompted in his final interview to discuss "the successive blows of his firing and lung cancer diagnosis," Joe Paterno told the Washington Post's Sally Jenkins with resignation: "Hey, the good Lord got a reason."

But the end of JoePa's iconic career as Penn State's football coach -- especially the ugly exit, surrounded by questions about the way Paterno handled allegations of child sexual assault by one of his assistant coaches -- cannot have been something he took lightly. In the past, he had worried aloud that death might follow quick on the heels of his retirement; an obituary in the Philadelphia Inquirer elaborates:

When Alabama coach Bear Bryant died of a heart attack in 1983, only 28 days after his 1982 retirement, a shaken Paterno absorbed the lesson.

“What else would I do?” he said when quizzed about retirement. “I don’t want to die. Football keeps me alive.”

Paterno was not alone in wondering whether retirement -- or other major life events, such as the loss of a spouse -- can speed the process of death. I asked a sociologist and a professor of geriatrics whether the loss of something you love can tip the balance on mortality.

There are some very good data that demonstrate that there are a number of risk factors for an early death. Certainly one of the biggest risk factors is the loss of a spouse.

The second thing we know is that coexisting conditions such as high psychological stress, depression and major changes in a life event are all associated with increased mortality.

The third thing that we know ... is that one of the most important things for people living with serious illness is the ability to find meaning and purpose in life. When you look at data from people with serious illnesses who have a desire for a hastened death -- or when you look at people living with a disease like cancer -- one of the most important things that they say they need is to be able to find meaning and dignity.

I wasn't involved with Joe Paterno's care at all. But an average person with a major life event and a new diagnosis of cancer ... you can just imagine the psychological distress that that person might be under, and indeed, the difficulty of quickly finding new meaning and purpose. We see this all the time in older adults who retire.

A substantial amount [about] any phase of life comes down to mentality or psychological coping. ... Separating out the psychological from the biological, in anybody, is almost impossible; they just are completely intertwined. Not speaking in particular of Paterno, but speaking of others who have one core aspect of their life that so defines them -- whether that be a job, or a role as parent, for instance -- when you lose that, it is often very difficult to find something else to replace it. For somebody like a football coach -- and we've seen several examples of this: Joe Paterno, Bear Bryant -- for whom the singular focus all their life has been an all-encompassing career, it becomes difficult, in some respects, to imagine what life would be like without that.

George Dickinson, professor of sociology at the College of Charleston and author of "Understanding Dying, Death, and Bereavement"

There is research that shows there's a high correlation between trauma -- such as the death of a spouse (that's the one that's most often cited) -- and the death of the sole survivor. With Paterno, I think it was a similar situation; there was a stressful event in his life which [may have] led to depression. And depression can lead to all kinds of changes in one's habits -- particularly eating and lack of sleep, and a whole variety of other things. Added on to that [in Paterno's case] was the fact that he had these health issues.

For men of his generation in particular, work was and is important. [When they retire,] they don't really know what to do with themselves, and they just kind of bounce around; if they're married, they probably drive their wives crazy. Women seem to have a lot more hobbies and things to do. Paterno actually implied that he didn't have any outside hobbies or interests; he said in an interview that his football coaching and his family -- that was his life. ... [The football coach] was his persona -- that was his salient characteristic.