So far, he’s winning big with the top 1 percent – and getting his clock cleaned with the middle class 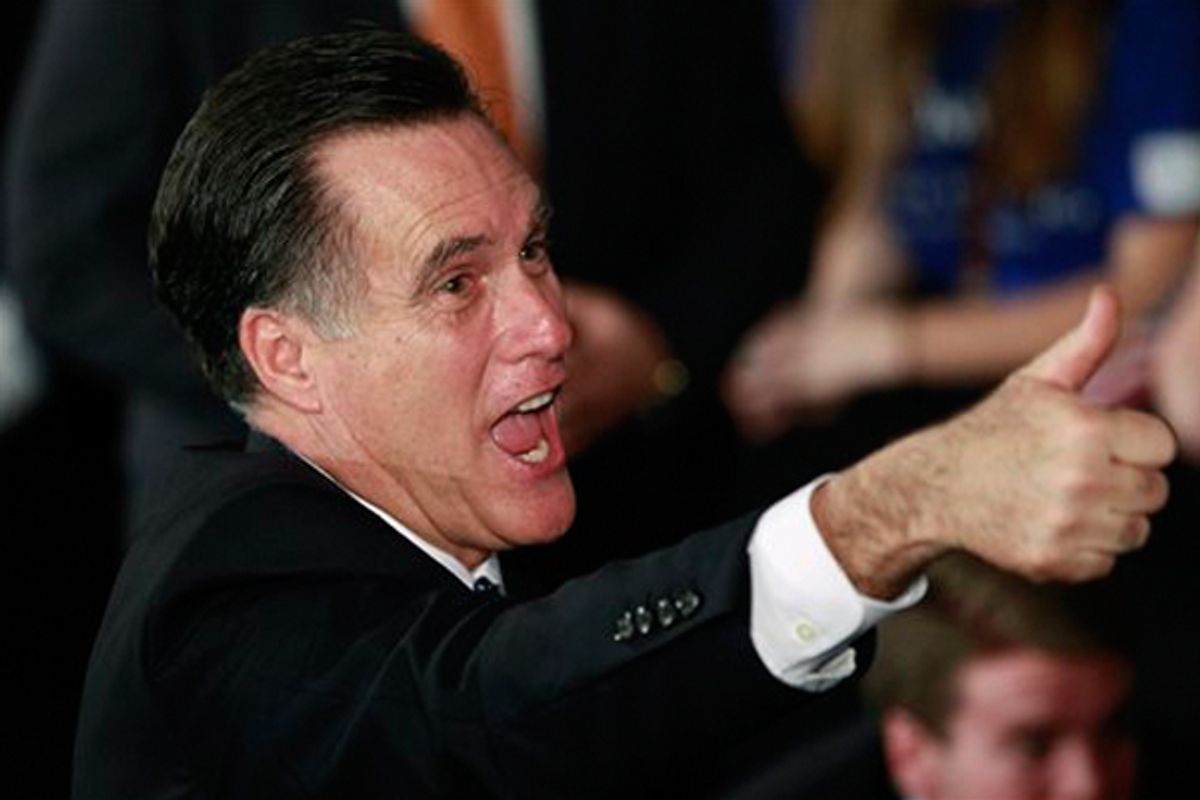 The defining test of Mitt Romney's campaign for the Republican presidential nomination is supposed to be whether he's able to break through the resistance that the evangelical Christians and Tea Party true believers who comprise the GOP base feel toward him. But the first three contests have revealed a different problem, one with potentially serious general election consequences: Enthusiasm for Romney seems directly related to income level.

So far, Romney has fared best among Republican primary voters from the highest income tier, while struggling mightily with the middle and working classes. Consider Saturday's South Carolina results. Romney lost the primary to Newt Gingrich by a 40 to 27 percent margin. But according to the exit poll, among voters with incomes over $200,000, Romney was actually the night's big winner, swamping Gingrich by 15 points, 47 to 32 percent. Where Gingrich did his damage was with those making between $50,000 and $100,000 (41 to 25 percent) and $30,000 and $50,000 (42 to 22 percent).

The same phenomenon was evident in New Hampshire and Iowa.

Since it's practically his home state (and since its GOP electorate is far more secular and independent-friendly than the national norm), Romney fared well to very well with just about every demographic group in the Granite State, winning with 39 percent overall. But he actually lost the lowest income tier, those earning less than $30,000, to Ron Paul by 3 points. And he only finished 4 points ahead of Paul among the $30,000-$50,000 subgroup. But with those making between $100,000 and $200,000, it was a blowout -- Romney 47 percent, Paul 17. And the spread was even more convincing at the $200,000+ level -- 52 to 18 percent for Romney over Paul.

This data suggests two problems for Romney. The first is urgent: The national Republican electorate is evolving, with less-educated, lower-income voters growing in numbers. He's going to have to win them over if he's going to beat back Newt Gingrich -- or any other primary season foe -- and secure the nomination. Particularly alarming for Romney is that this income gap doesn't seem to be a reaction to the "vulture capitalism" attacks on his Bain Capital record and the controversy over his own tax returns. Those topics were prominent in the run-up to South Carolina (and may well have exacerbated his problems there with non-rich voters) but not in Iowa and New Hampshire. The resistance of middle- and working-class Republican voters to Romney seems to have deeper roots.

This relates to the longer-term problem for Romney: Even if he wins the nomination, he may face a unique challenge in appealing to swing voters who aren't part of the top 1 percent.

The Obama team, of course, is ready to paint Romney as a symbol of a pampered super-rich elite that, according to their narrative, GOP policies are designed to protect. As I've written before, Romney's campaign has been aware of this and has taken some modest steps to insulate its candidate. Rhetorically, Romney goes out of his way to claim that the middle class will be his priority as president and to insist that "I'm proposing no tax cuts for the rich." And while Gingrich is calling for the outright elimination of the capital gains tax, Romney has said he only favors cutting it for people making under $200,000. But none of this seems to be helping him. Rich Republicans overwhelmingly see Romney as their candidate, while blue-collar Republicans are far more friendly to his opponents. It suggests that Romney's 1 percent image is a real drag -- one that could prove costly if he makes it to the fall.