Obama officials will finally speak on the Awlaki killing, but most notable is what they will continue to conceal 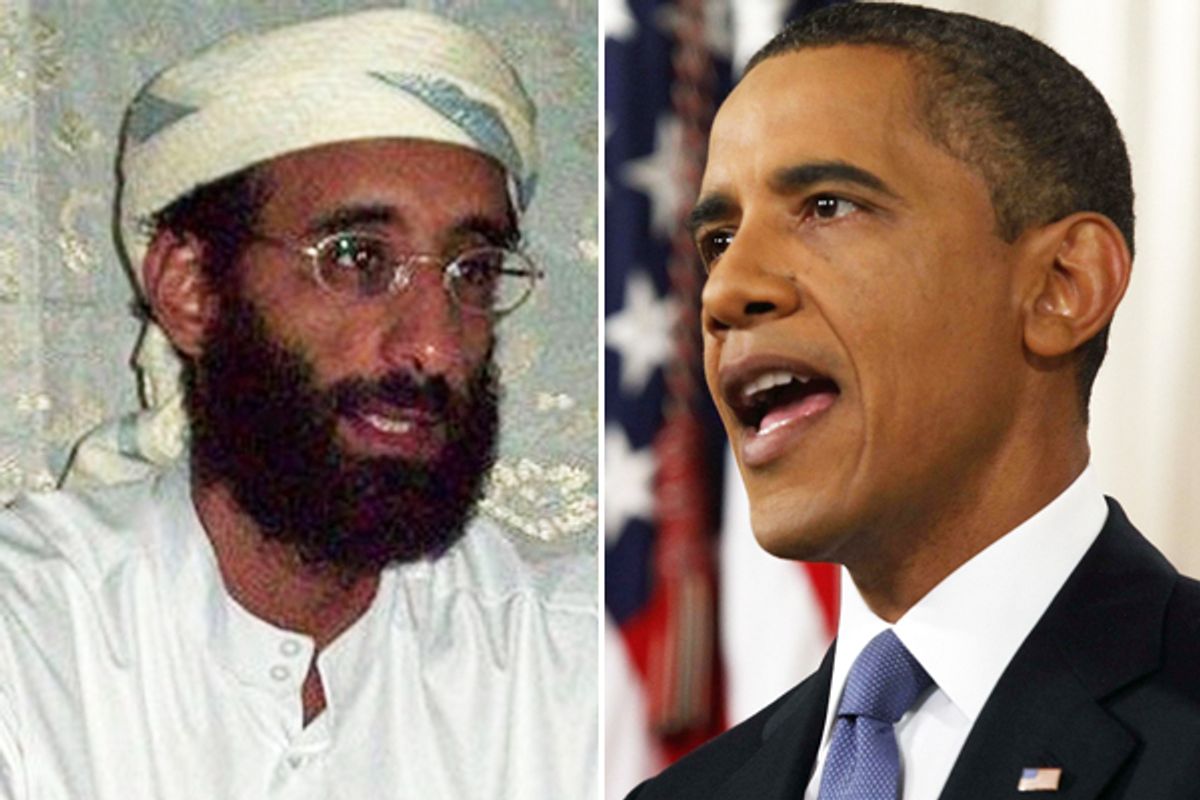 On Saturday in Somalia, the U.S. fired missiles from a drone and killed the 27-year-old Lebanon-born, ex-British citizen Bilal el-Berjawi. His wife had given birth 24 hours earlier and the speculation is that the U.S. located him when his wife called to give him the news. Roughly one year ago, El-Berjawi was stripped of his British citizenship, obtained when his family moved to that country when he was an infant, through the use of a 2006 British anti-Terrorism law -- passed after the London subway bombing -- that the current government is using with increasing frequency to strip alleged Terrorists with dual nationality of their British citizenship (while providing no explanation for that act). El-Berjawi's family vehemently denies that he is involved with Terrorism, but he was never able to appeal the decree against him for this reason:

Berjawi is understood to have sought to appeal against the order, but lawyers representing his family were unable to take instructions from him amid concerns that any telephone contact could precipitate a drone attack.

Obviously, those concerns were valid. So first the U.S. tries to assassinate people, then it causes legal rulings against them to be issued because the individuals, fearing for their life, are unable to defend themselves. Meanwhile, no explanation or evidence is provided for either the adverse government act or the assassination: it is simply secretly decreed and thus shall it be.

Exactly the same thing happened with U.S. citizen Anwar Awlaki. When the ACLU and CCR, representing Awlaki's father, sued President Obama asking a federal court to enjoin the President from killing his American son without a trial, the Obama DOJ insisted (and the court ultimately accepted) that Awlaki himself must sue on his own behalf. Obviously, that was impossible given that the Obama administration was admittedly trying to kill him and surely would have done so the minute he stuck his head up to contact lawyers (indeed, the U.S. tried to kill him each time they thought they had located him, and then finally succeeded). So again in the Awlaki case: the U.S. targets someone for death, and then their inability to defend themselves is used as a weapon to deny their legal rights.

The refusal to provide transparency is also the same. Ever since Awlaki was assassinated, the Obama administration has steadfastly refused to disclose not only any evidence to justify the accusations of Terrorism against him, but also the legal theories it is using to assert the power to target U.S. citizens for death with no charges. A secret legal memo authorizing the Awlaki assassination, authored by Obama lawyers David Baron and Marty Lederman, remains secret. During the Bush years, Democratic lawyers vehemently decried the Bush DOJ's refusal to release even OLC legal memoranda as tyrannical "secret law." One of the lawyers most vocal during the Bush years about the evils of "secret law," Dawn Johnsen (the never-confirmed Obama appointee to be chief of the OLC) told me back in October: "I absolutely do not support the concealment of OLC's Awlaki memo . . . .The Obama administration should release either any existing OLC memo explaining why it believes it has the authority for the targeted killings or a comparably detailed legal analysis of its claimed authorities."

A Daily Beast report today says that the Obama administration "is finally going to break its silence" on the Awlaki killing, but here's what they will and will not disclose:

In the coming weeks, according to four participants in the debate, Attorney General Eric Holder Jr. is planning to make a major address on the administration’s national-security record. Embedded in the speech will be a carefully worded but firm defense of its right to target U.S. citizens. . . .

An early draft of Holder’s speech identified Awlaki by name, but in a concession to concerns from the intelligence community, all references to the al Qaeda leader were removed. As currently written, the speech makes no overt mention of the Awlaki operation, and reveals none of the intelligence the administration relied on in carrying out his killing.

In other words, they're going to dispatch Eric Holder to assert that the U.S. Government has the power to target U.S. citizens for assassination by-CIA-drone, but will not even describe a single piece of evidence to justify the claim that Awlaki was guilty of anything. In fact, they will not even mention his name. As Marcy Wheeler said today:

The problem–the problem that strikes at the very heart of democratic accountability–is that the Administration plans to keep secret the details that would prove (or not) that Awlaki was what the Administration happily claims he is under the veil of anonymity, all while claiming that precisely that information is a state secret.

The Administration seems to be planning on making a big speech on counterterrorism–hey! it’s another opportunity to brag again about offing Osama bin Laden!–without revealing precisely those details necessary to distinguish this killing, and this country, from that of an unaccountable dictator.

The CIA seems to have dictated to our democratically elected President that he can’t provide the kind of transparency necessary to remain a democracy. We can kill you–they appear to be planning to say–and we’ll never have to prove that doing so was just. You’ll just have to trust us!

That, of course, is the heart and soul of this administration's mentality when it comes to such matters, and why not? Between Republicans who always cheer on the killing of Muslims with or without any explanation or transparency, and Democrats who do so when their leader is the assassin, there is little political pressure to explain themselves. If anything, this planned "disclosure" makes the problem worse, since we will now have the spectacle of Eric Holder, wallowing in pomp and legal self-righteousness, finally defending the power that Obama already has seized -- to assassinate U.S. citizens in secret and with no checks -- but concealing what is most needed: evidence that Awlaki was what the U.S. Government claims he is. That simply serves to reinforce the message this Government repeatedly sends: as Marcy puts it, "We can kill you and we’ll never have to prove that doing so was just. You’ll just have to trust us!" The Yemen expert Gregory Johnsen added: "The US legal opinion on Awlaki is one thing, but it rests on assumptions made by the intelligence community, which won't be revealed."

This no longer seems radical to many -- it has become normalized -- because it's been going on for so long now and, more important, it is now fully bipartisan consensus. But to see how extreme this all really is, to understand what a radical departure it is, just consider what George Bush's neocon Ambassador to Israel, Martin Indyk, told the Israelis in 2001, as flagged by this Guardian Op-Ed by Mary Ellen O'Connell comparing Obama's assassinations to Bush's torture program:

The United States government is very clearly on the record as against targeted assassinations. They are extrajudicial killings, and we do not support that.

What George Bush's Ambassador condemned to the Israelis' face just a decade ago as something the nation was steadfastly against has now become a staple of government policy: aimed even at its own citizens, and carried out with complete secrecy. And those who spent years mocking the notion that "9/11 Changed Everything" will have no choice but to invoke that propagandistic mantra in order to defend this: what else is there to say?