NBC toned down the atmosphere at Monday’s GOP debate, and it took the fight out of the former House speaker 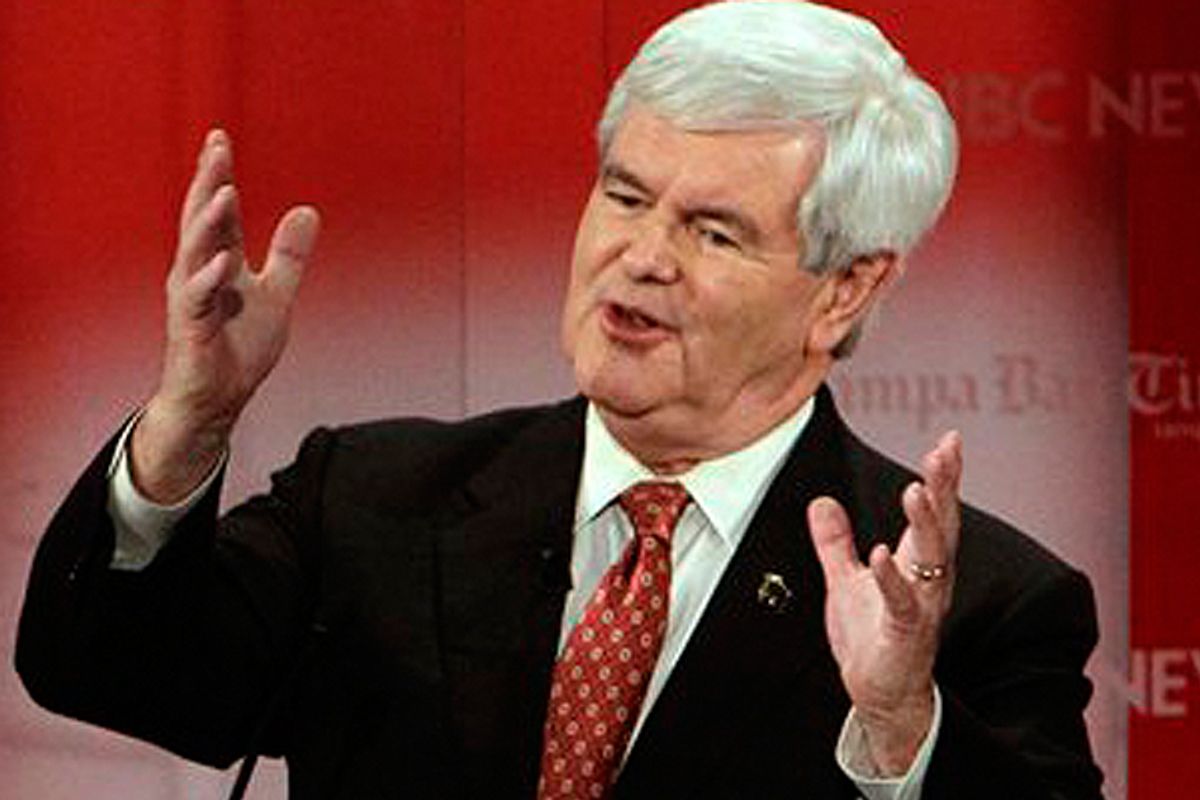 If Fox News and CNN should be credited with an assist for Newt Gingrich’s landslide South Carolina victory, NBC deserves one for helping to expose the hollowness of the former House speaker’s biggest boast.

The atmosphere for the debate the Peacock network hosted in Florida Monday night was a marked departure from what we saw in South Carolina last week. Whereas Fox and CNN amped their live audiences up beforehand and encouraged boisterous responses during the proceedings, the NBC opening was comparatively sober; this time, it didn’t seem like it had been farmed out to a team of NBA producers. When moderator Brian Williams opened the telecast, the crowd was silent and respectful, and it remained so for virtually all of the next 100 minutes.

It helped that Williams and the two media panelists who joined him later did nothing to inflame the passions and resentments of the Republican crowd. This, too, was a break from last week, when Fox’s Juan Williams earned hisses of contempt by aggressively challenging Gingrich’s characterization of Barack Obama as a “food stamp president” and when CNN’s John King clumsily asked Gingrich to respond to his second ex-wife's claim that he’d asked for an open marriage before divorcing her.

These differences go a long way toward explaining why Gingrich performed as if he’d been given a heavy sedative Monday night. In both debates last week, he fed off the live audience’s energy and earned repeated ovations by channeling its hostility toward Williams and King, and the “liberal media” in general. As he went along, his confidence and creativity seemed to grow -- his campaign ended spinning part of his anti-Williams riff into a television ad – and his performances were crucial to the sudden surge that culminated in Saturday’s rout.

But on Monday, there was no energy in the hall for Gingrich to feed off of, and no one on the media panel willing to step up and play his foil. From the very beginning, his responses were jarringly flat and unfocused. When an unusually sharp and focused Mitt Romney came after him hard in the debate’s early minutes, Gingrich seemed unsure how – or even whether – to engage him. And when Romney dismantled Gingrich’s defense of his lucrative Freddie Mac work like a seasoned prosecutor, the normally loquacious former speaker was literally left speechless.

The rest of the night wasn’t actually that bad for Gingrich. Romney mostly let up on the attacks and the debate moved on to a series of policy questions – Castro (of course), Terri Schiavo (still?), the space program, Iran, immigration and taxes. Gingrich scored his share of points, as did Romney, and the result after the opening dust-up was probably a draw.

Which might be good enough for another candidate, but Gingrich has made his supposedly peerless debating skills the centerpiece of his pitch to Republican primary voters. His most oft-repeated promise on the campaign trail is to challenge Obama to seven, three-hour “Lincoln-Douglas” debates. “I'd let him use a Teleprompter,” Gingrich blusters. “I'll just rely on knowledge."

After last week’s debates, it was easy for the Republican base, which has convinced itself that Obama snuck into the White House by seducing unsuspecting Americans with smooth words written by someone else, to believe there was something to these taunts. But all he was doing was playing to the persecution complex of a fired-up, rabidly partisan crowd, whose euphoric response rubbed off on like-minded viewers at home. It was powerful stuff, but it spoke only to Gingrich’s ability to communicate with the hardcore base of his own party – not to win over swing voters torn between the GOP’s message and Obama’s.

But Monday night was a much better warm-up for the fall debates than what we saw last week. Think of what general election presidential debates look and sound like. The live audiences are generally made up of supporters of each candidate (with tickets handled by each campaign), local dignitaries and in some cases undecided voters chosen by television producers or the debate commission. These crowds are told over and over that presidential debates are a serious, somber affair. Outbursts are rare. In other words, the atmosphere that took the fight out of Gingrich Monday night is exactly the atmosphere he’d face in his seven, three-hour debates with Obama (if Obama ever agreed to them, which he wouldn’t).

The good news for Gingrich is that there’s another debate between now and Florida’s Jan. 31 primary, and CNN is handling it. So maybe the wild crowds will be back. But even if he does manage to recapture his South Carolina magic, Republicans would do well to remind themselves of what happened in Tampa Monday night and to realize: Gingrich’s debating skills are mostly an illusion.