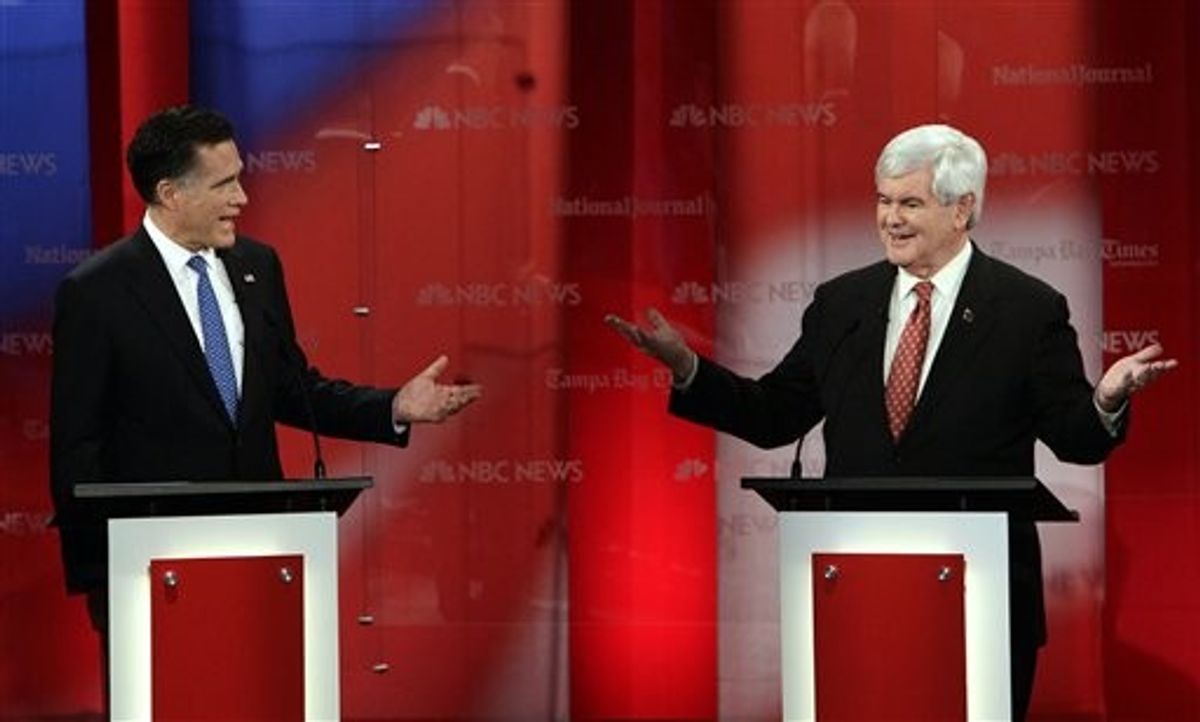 Newt Gingrich clearly missed the rabid South Carolina crowds at Monday night's debate. NBC asked the Tampa, Fla. audience not to cheer, and mostly they didn't, leaving Gingrich listless without angry mob energy. He didn't bash the media the way he did in last week's Fox and CNN debates, and he tried to act presidential when Mitt Romney jabbed him about his work for Freddie Mac and Fannie Mae.

But he failed. Presidents don't pout. A sulky Gingrich complained the GOP campaign had become "unnecessarily personal and nasty, and that's sad." Gingrich objecting to "personal and nasty" is as believable as Romney pretending he does his own laundry. That's really sad. But Romney had the better night, hitting Gingrich early and often for having to resign the House speakership "in disgrace" due to ethics charges. And when Gingrich tried to claim he left his leadership post voluntarily, Ron Paul double-teamed him with Romney. "He didn't have the votes, that was what the problem was," Gingrich's former House colleague told the crowd.

Also Monday night, Romney made partial tax returns available to reporters. They showed he paid a rate of 13.9 percent in 2011 and 2010, on income of around $21 million both years. That means in a single day, Romney earned more than the median income for U.S. workers, just over $31,000. He paid a lower tax rate than workers making $40,000 to $50,000, because his income came from investments (somehow it seems he didn't have to declare the $374,000 he made last year from speaking fees; it's still not clear how he dodged that.) Tuesday morning the focus will be back on Romney's shamefully low tax rate, and the way he earned his wealth at Bain Capital. Monday night he got his licks in on Gingrich.

Romney hammered Gingrich hard on some financial information Gingrich released Monday: his contract with Freddie Mac. While Gingrich insists he didn't lobby, Romney noted that his newly released contract showed he was hired by the firm's chief lobbyist. "We have congressmen who say you lobbied them," he told his rival. "I didn't lobby them," Gingrich shot back, his voice getting high and whiny the way it did when that Iowa voter told him he was a disgrace to his party last spring. At one point he fell awkwardly silent. "You can call it whatever you like, I call it influence peddling," Romney concluded. Score that round for the wealthy former frontrunner.

But if it was a good night for Romney, that's mainly in contrast to a lot of bad nights, when he let Gingrich prevail. The man shouldn't be allowed to speak unscripted. Though he got off some good punches at Gingrich, he didn't do much to sell himself to the conservative GOP base. While he took the standard GOP line and trashed the Dodd-Frank banking reform law, he nonetheless backed banking regulation – and he came off like a tool of finance capitalism as he did it. "You can't have everybody open a bank in their garage!" he exclaimed, sounding like a modern-day Mr. Potter.

Again he bragged that even if he didn't defeat Ted Kennedy for Massachusetts senator, "I made him take out a mortgage on his house," which sounded like the way a rich guy would boast about besting another rich guy, not the way an American runs for president. Even on a good night he sounds like a corporate motivational speaker, at one point ticking off the seven keys to emerging from the recession like he was selling "The Seven Habits of Highly Effective Economies."

He sounded uncommonly robotic, even for Romney, when he said he didn't think illegal immigrants needed to be rounded up because "I believe in self-deportation." But that line wasn't just awkward language, it's cruel GOP politics. The backers of the latest wave of anti-immigration legislation use the Orwellian term "self-deportation" to describe what will happen when they harass undocumented immigrants enough – with obstacles to working, renting, attending school or getting health care – that they'll "self-deport," as in exit the country.

If the candidates once again had no ideas for reviving the economy, they were even scarier on the issues of foreign policy. Despite the NBC ban on applause, the crowd clapped when Romney hoped for Fidel Castro's death, and clapped louder still when Gingrich said the Cuban leader will go to hell. Interestingly, Ron Paul got the loudest applause when he denounced tough sanctions on Cuba because "the Cold War is over." That's either a sign of how much Florida GOP politics has changed when it comes to Cuba, or how many supporters Paul got into the debate.

On the question of war with Iran, which everyone but Paul seems to dream about, I thought again about how unlikely a populist Gingrich really is. "The American people have no interest in going to war anywhere," he said imperiously, not even to retaliate for Pearl Harbor or 9/11. Boy, we sound like a bunch of sissies. But given our "historic commitment to freedom of the seas," Gingrich seemed to believe we ought to go to war over Iran's threats to close the Straits of Hormuz, the wimpy American public be damned.

I missed the rowdy GOP audience in this debate. Everyone who watches plays the popular guessing game, "What cruelty will provoke lusty boos or cheers this time around?" Will they applaud the death penalty, people dying without medical care, the idea that the unemployed deserve their fate or the dressing down of the only black moderator? Will they boo gay soldiers or a moderator's timid question about Gingrich's second adultery-driven divorce? Gingrich wasn't the only one disappointed NBC silenced the crowd.