Rules of American justice: a tale of three cases 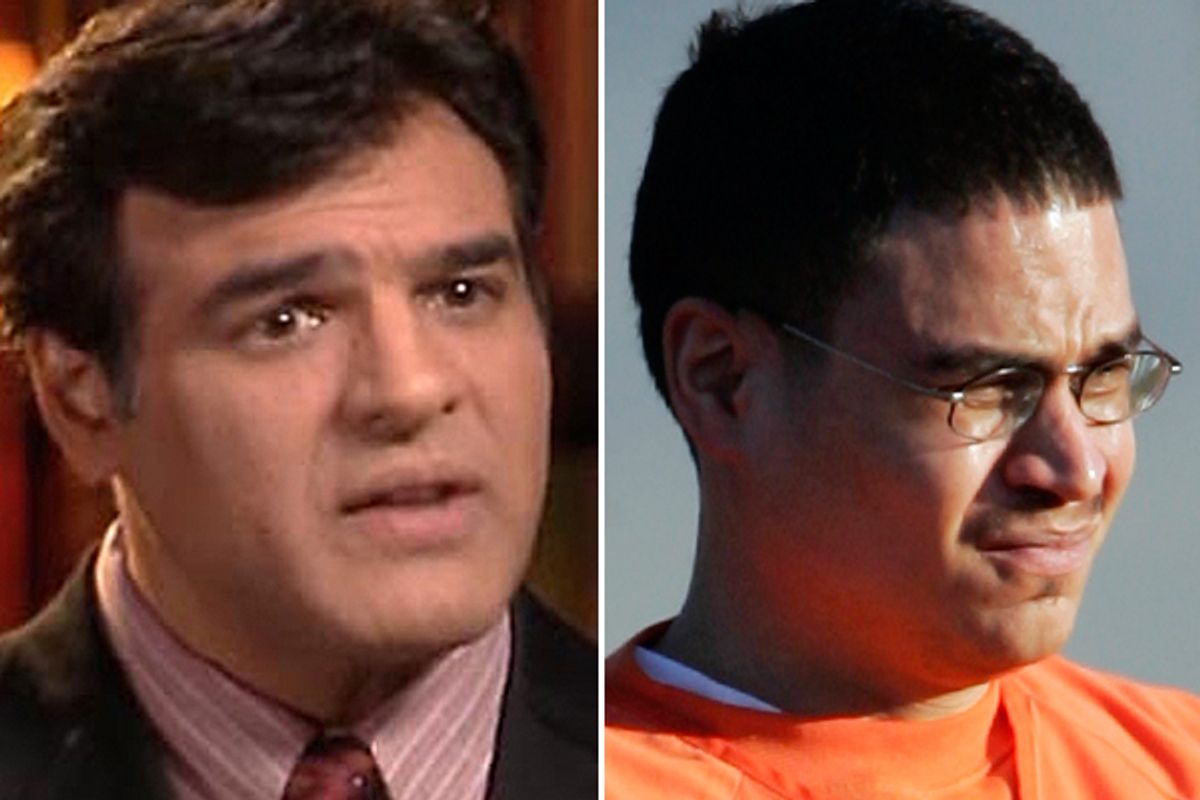 Developments in three legal cases, just from the last 24 hours, potently illuminate the Rules of American Justice. First, the Justice Department yesterday charged a former CIA agent, John Kiriakou, with four felony counts for having allegedly disclosed classified information to reporters about the CIA's interrogation program. Included among those charges are two counts under the Espionage Act of 1917, based on the allegation that he disclosed information which he "had reason to believe could be used to the injury of the United States and to the advantage of any foreign nation." Kiriakou made news in 2007 when he told ABC News that he led the team that captured accused Terrorist Abu Zubaydah and that the techniques to which Zubaydah was subjected, including waterboarding, clearly constituted "torture," though he claimed they were effective and arguably justifiable. He's also accused of being the source for a 2008 New York Times article that disclosed the name of one of Zubaydah's CIA interrogators.

What's most notable here is that this is now the sixth prosecution by the Obama administration of an accused leaker, and all six have been charged under the draconian, World-War-I era Espionage Act. As EFF's Trevor Timm put it yesterday: this is the "6th time under Obama someone is charged with Espionage for leaking to a journalist. Before Obama: only 3 cases in history." This is all accomplished by characterizing disclosures in American newspapers about America's wrongdoing as "aiding the enemy" (the alleged enemy being informed is Al Qaeda, but the actual concern is that the American people learn what their government is doing). As The New York Times' Charlie Savage wrote this morning, Obama has brought "more such cases than all previous presidents combined," and by doing so, has won the admiration of the CIA and other intelligence agencies which, above all else, loathe transparency (which happens to be the value that Obama vowed to provide more of than any President in history).

Also yesterday in American justice, a three-judge panel of a federal appellate court in Virginia upheld the dismissal of a lawsuit brought against Donald Rumsfeld and other Bush officials by Jose Padilla, the U.S. citizen who was imprisoned for almost three years without charges or even a lawyer and was systematically tortured to the point of permanent mental incapacitation. Padilla sued the former Defense Secretary on the ground that he had authorized Padilla's illegal imprisonment and torture. The Obama DOJ vigorously defended Rumsfeld, arguing (a) that Rumsfeld is entitled to immunity on the ground that he had reason to believe his acts were legal and (b) an American citizen has no right to sue a government official for the treatment he receives as a designated "enemy combatant" -- even if the treatment in question is torture and prolonged imprisonment without charges.

The three-judge panel accepted those arguments and held Padilla cannot sue those responsible for his torture and lawless imprisonment (Padilla, by stark contrast, recently had his sentence increased when the Bush and Obama DOJs argued that his 17-year prison term was inadequate even in light of the abuse he has suffered). Thus continues the perfect streak of every single War on Terror victim -- literally -- being denied a day in America's courts. That does not mean that every War on Terror victim has had their cases heard and lost. It means that each and every one has been denied the right even to have their claims heard in an American court; their cases have been, without exception, dismissed on the grounds of secrecy and/or immunity before the merits of their claims are examined. Even as they have been able to pursue claims against foreign officials in countries around the world, often successfully, the Bush and Obama DOJs have insisted, and courts have agreed, that they have no right even to be heard in an American court against the country and its officials most responsible for their (often savage) mistreatment -- even if everyone acknowledges that they were completely innocent.

Finally in American justice yesterday, the conclusion came to the criminal process arising from a horrific 2005 incident in which 24 unarmed Iraqi civilians were slaughtered in the town of Haditha during American raids conducted in the aftermath of an explosion of a roadside bomb. The Marine Staff Sgt. who ordered his soldiers to "shoot first, ask questions later," Frank Wuterich, was in the midst of a manslaughter trial that could have sent him to prison for life (first-degree murder charges were previously withdrawn by the Government). Instead, prosecutors "offered Wuterich a deal that stopped the proceedings and could mean little to no jail time." Instead, he "pleaded guilty Monday to negligent dereliction of duty" and "now faces no more than three months in confinement." Lest you think that's too lenient: "he could also lose two-thirds of his pay and see his rank demoted to private when he's sentenced." The facts underlying this development are as unsurprising as they are familiar:

Kamil al-Dulaimi, a Sunni lawmaker from the Anbar provincial capital of Ramadi, called the plea agreement proof that "Americans still deal with Iraqis without any respect."

"It's just another barbaric act of Americans against Iraqis," al-Dulaimi told The Associated Press. "They spill the blood of Iraqis and get this worthless sentence for the savage crime against innocent civilians."

The Rules of American Justice are quite clear:

(1) If you are a high-ranking government official who commits war crimes, you will receive full-scale immunity, both civil and criminal, and will have the American President demand that all citizens Look Forward, Not Backward.

(2) If you are a low-ranking member of the military, you will receive relatively trivial punishments in order to protect higher-ranking officials and cast the appearance of accountability.

(3) If you are a victim of American war crimes, you are a non-person with no legal rights or even any entitlement to see the inside of a courtroom.

(4) If you talk publicly about any of these war crimes, you have committed the Gravest Crime -- you are guilty of espionage -- and will have the full weight of the American criminal justice system come crashing down upon you.

So warped but clear are these Rules of American Justice that they produced darkly sardonic applications yesterday. Mazahir Hussain said: "Bradley Manning should've really considered committing some war crimes instead of exposing them." Regarding this heinous story about a campaign manager of a Democratic House candidate in Arkansas coming home to find his child's cat murdered with the word "LIBERAL" scrawled on the cat's corpse, a picture of which made its way to the Internet to highlight how horrible a crime it was, one commenter applied the Obama mentality as follows: "We should look forward, not back on this cat killing. But perhaps whoever released that photo should be prosecuted." And about the Kiriakou case, John Cole sarcastically celebrated: "At Long Last, Someone Will Face a Waterboarding Related Prosecution, and then added: "He’s being prosecuted for blabbing about what happened- not the actual crime itself."

It's long past time to rip those blindfolds off of the Lady Justice statues. When the purpose of American justice is to shield those with the greatest power who commit the most egregious crimes, while severely punishing those who talk publicly about those crimes, it's hard to imagine how it can get much more degraded or corrupted than that.

Part of the DOJ's criminal investigation in the Kiriakou matter included investigating whether criminal defense lawyers representing GITMO detainees, from the ACLU and elsewhere, committed crimes by attempting to learn of the identity of the CIA agents who tortured their clients (so that they could sue or otherwise hold those torturers accountable: exactly what any competent lawyer should do). Although the DOJ ultimately decided yesterday against indictments of those lawyers, the very fact that the DOJ criminally investigated them at all is self-evidently dangerous. About that investigation, ACLU Executive Director Anthony Romero told Savage that "it — and the Obama-era leak investigations more broadly — had had a 'chilling effect on defense counsel, government whistle-blowers, and journalists'." That, of course, is exactly its purpose.

UPDATE: White House spokesman Jay Carney previewed President Obama's State of the Union speech tonight as follows: "The State of the Union will be . . .  about the central mission that we have as a country and his focus as president: Building a country and an economy where we reward hard work and responsibility, where everyone does their fair share, and where everyone is held accountable for what they do." I find it hard to believe that they don't cynically cackle in private when they come up with these things (h/t profmarcus).