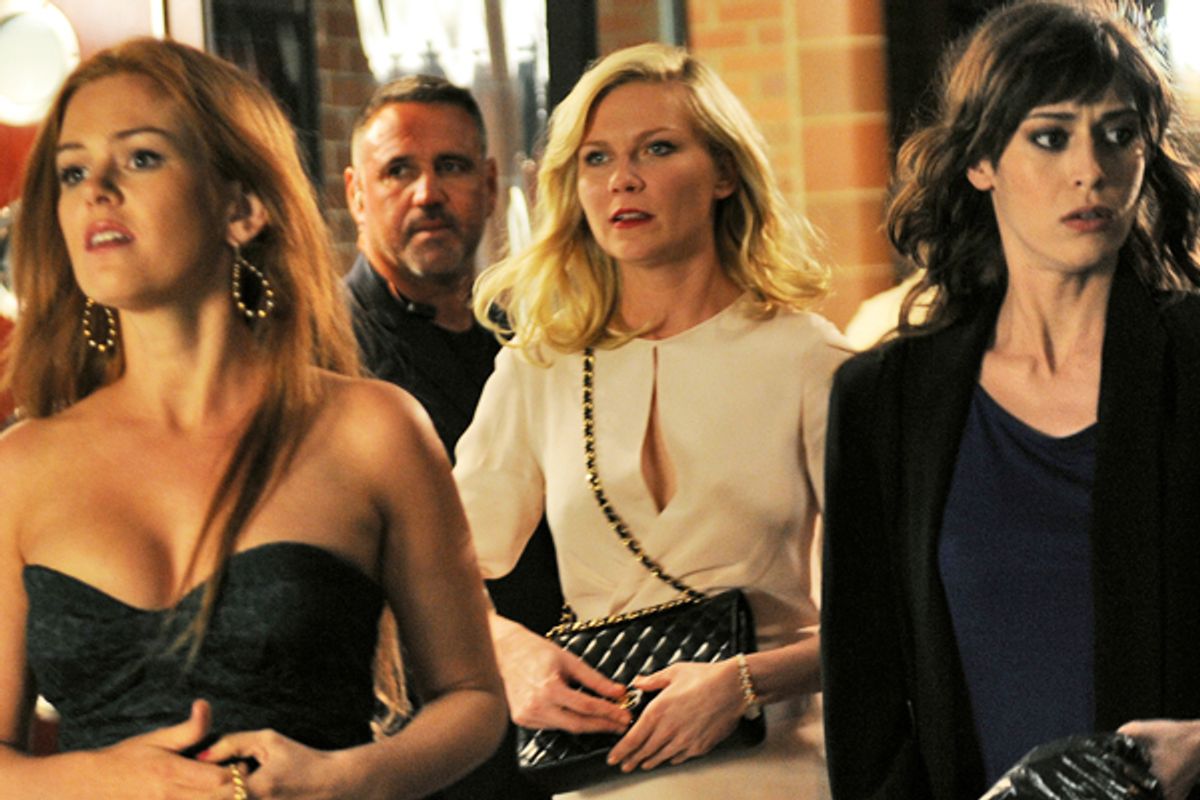 PARK CITY, Utah -- After a highly uneven opening weekend at this year's Sundance Film Festival, things on the Wasatch Range are back to normal. We've got piles of fresh snow, spectacular views and -- at long last -- a few of the potential hits this place is known for. One of those is "The Surrogate," a drama starring John Hawkes as a disabled man seeking to lose his virginity that's already being talked up as a 2013 Oscar contender (and was just purchased for $6 million by Fox). But the big news on Monday night was the packed and buzzing premiere of "Bachelorette," the smart, ruthless and foul-mouthed wedding comedy that marks the auspicious debut of writer-director Leslye Headland.

Of course "Bachelorette" will be compared to last summer's hit "Bridesmaids," because it's a female-centric and female-created comedy and because of its themes and setting. Headland insists that any resemblance is coincidental, and in fact they're quite different kinds of movies. This is a rapier-sharp, fast-paced comedy of manners, less concerned with delivering big laughs than with exploring its characters and their complicated interactions. Headland is clearly trying to channel the spirit of John Hughes (perhaps a coked-up and promiscuous John Hughes), but her discursive, self-involved, shamelessly New Yorky characters also suggest the films of Whit Stillman ("Metropolitan" and "The Last Days of Disco").

Kirsten Dunst plays Regan, the ice-blond control freak who is serving as tyrannical maid of honor for her high-school friend Becky (Rebel Wilson). Mind you, Becky -- who is pretty much the designated "fat girl" in their group of friends -- has no idea how bitter Regan is about watching her get hitched first. Their other two friends, the permanently trashed Jena (Lizzy Caplan) and the simultaneously dim and depressed Katie (Isla Fisher) definitely do know, and haven't forgotten that Becky used to be known as "Pig Face" in high school.

What makes "Bachelorette" special isn't the basic bride-vs.-bridesmaids setup, nor is it the farcical "After Hours"-esque plot that ensues after the coked-up Regan and Katie accidentally destroy Becky's wedding dress and have to get it replaced or restored before morning. (There's no point going into more detail now; I can assure you you'll be able to see this movie later this year.) That's really just an excuse for Headland to craft scenes that go in surprising directions -- I think she offers the strangest strip-club scene in cinema history -- and to reveal unexpected dimensions in each member of her bitchy sisterhood.

It isn't surprising to learn that Headland's background is in theater; in some respects, "Bachelorette" is a dense, dark character drama tarted up in high heels and a short skirt and dosed with pills and coke. Can a movie this raunchy about women this mean really be feminist? I think there's no doubt. As Caplan said during the post-screening Q&A, most of the time playing a woman in an ensemble comedy means trying to calm down and control the wild and crazy guys, whereas this film is exactly the opposite. Yes, Regan, Gena and Katie all develop romantic possibilities over the course of their long night -- the best of these is Gena's awkward, delicate rekindling of a long-lost high school flame (Adam Scott) -- but in all their flawed, hypocritical, horndog realness, they are the authors of their own destiny.