Obama takes his case to the swing states 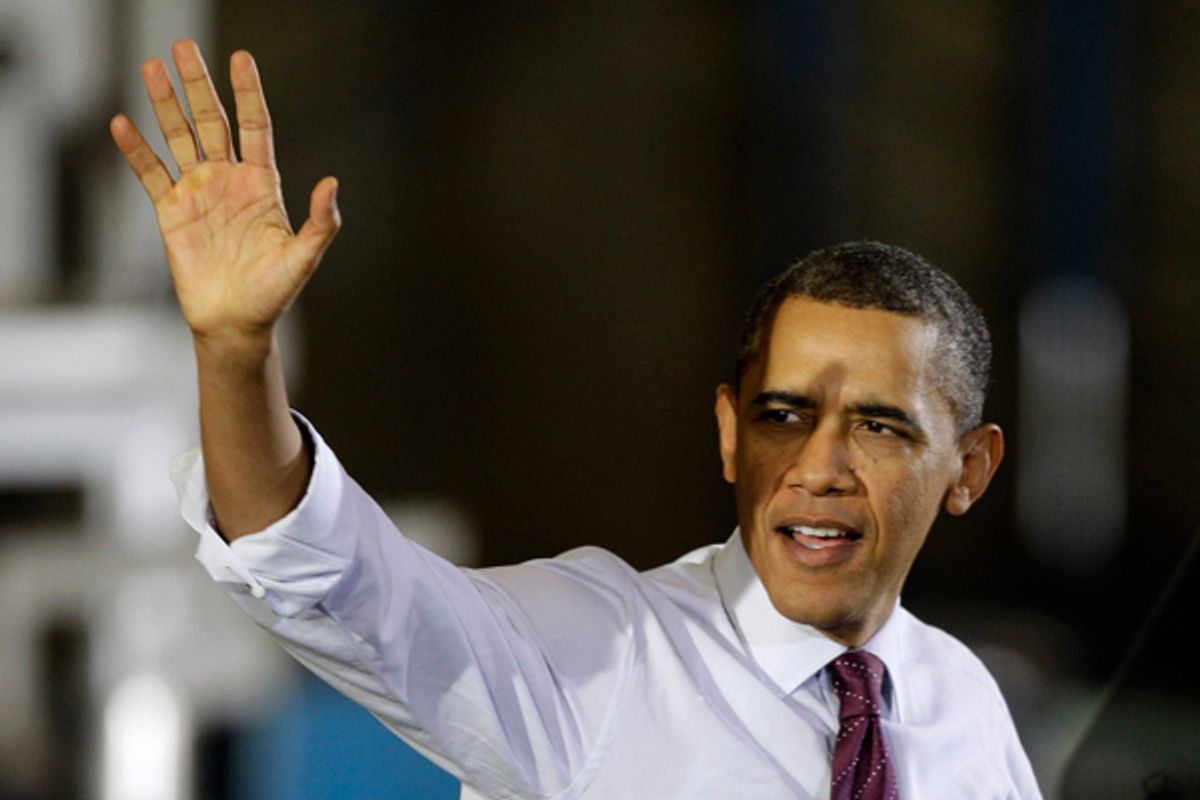 The day after delivering his “America built to last” State of the Union address, the president began his own three-day, five-state unofficial campaign tour in search of a second term. The selection of states for the trip—Iowa, Arizona, Nevada, Colorado and Michigan—was anything but random. Four of the five will hold their Republican primaries or caucuses in February, and a fifth, Iowa, recently voted. At least four of the five are considered swing states, and a fifth, Michigan, could be competitive if native son Mitt Romney is the GOP nominee, as the White House has been anticipating for the past year. All five states feature key blocks of blue-collar white and Latino voters, and four of the five (save Colorado) elected or re-elected Republicans governors in 2010. Obama’s 2012 re-election bid is now underway.

As the White House’s list of SOTU talking points confirms, the not-so-secret theme for both the speech and companion trip is building a durable economy that rewards middle-class workers. The president will no doubt emphasize and empathize with the economic pain that residents of each state feel. According to “economic distress measures” published by the Kaiser Foundation’s statehealthfigures.org website, all five rank among the 18 states with the worst monthly employment losses between November 2010 and November 2011. Four of the five states rank among the top 11 nationally in mortgage foreclosure rates, and although the economy in the fifth, Iowa, is better than most, last year it ranked seventh nationally in food stamp dependency growth.

The Republican National Committee began criticizing the trip before Obama even left town, with Republican National Committee spokesman Ryan Mahoney issuing identical statements that merely substitute the name of each state’s residents. “Iowans [ditto Arizonans, Nevadans] need a president focused on their jobs, not a campaigner-in-chief solely focused on his own reelection,” said Mahoney. “Barack Obama should be more focused on getting Arizona's economy back on track and putting the millions of unemployed Americans back to work, instead of constantly campaigning.”

A closer look at the five states on Obama’s itinerary shows what he hopes to achieve.

Iowa: Obama starts his re-election campaign today in the state that gave birth to his 2008 presidential victory with his first stop since July 2008 to Cedar Rapids, where he will visit Conveyor Engineering & Manufacturing, a 35-year-old company that makes “screw-type” farm conveyors. The theme of the stop will be manufacturing revival.

One of just two states (New Mexico) to flip from blue to red and back to blue again between 2000 and 2008, Iowa could again be a swing state despite Obama’s somewhat comfortable, 9.5-point victory there four years ago. Unlike the subsequent four stops on the trip, however, Iowa is different in two major ways. First, its non-white population is very small. And although political scientist Michael Lewis-Beck identified Iowa as the state most representative of the overall U.S. economy during the 2008 cycle, the second is that rising farm prices and the state’s relatively small number of foreclosures sheltered it from the economic crisis unlike the others. It’s current, 5.6 unemployment rate is among the lowest in the nation.

That said, because he cannot rely on a base of minority voters, among the five states Iowa is where Obama most needs to make his case to working-class white Americans that he has been and will continue to be the best steward of the nation’s slow, but steady recovery. According to a late November poll, he led the entire Republican field, but his margin over Romney was a mere seven points.

Arizona: To complement to the traditional manufacturing stop in Iowa, the president stops in Chandler, a sprawling suburb southeast of Phoenix, for a tech-economy event at Intel’s Ocotillo Campus. Chandler’s Maricopa County is ground zero for the mortgage crisis. Although foreclosure rates there peaked in late 2009, foreclosure continues to be a problem; the county has a special hotline and webpage for residents facing foreclosure.

Arizona gained two electors from the 2010 Census, ranks fourth nationally in Latino population share and, along Colorado, Nevada and New Mexico, represents the Democrats’ missing, fourth jewel in burgeoning Southwest. Obama lost Arizona in 2008 by about the same, 9-point margin he won Iowa, but in 2012 the GOP will not benefit from having native son John McCain atop the ballot. A late November statewide poll showed Obama with a 41 percent approval/54 percent disapproval split, but another poll two weeks ago showed him beating all Republicans challengers except Romney.

Immigration issues cut both ways for Obama, helping him among Latinos while hurting him among Minutemen-sympathizing voters who applauded Gov. Jan Brewer’s 2010 immigration law and subsequent lawsuit against the Obama Administration. As is so often Obama’s wont, in the SOTU he aimed for the voters in between, calling for a comprehensive reform bill while also making a veiled reference to his administration’s record levels of deportation. But at Intel, expect Obama to dodge the subject altogether in favor of sticking closely to his jobs-and-growth script.

Nevada: On Thursday, the president heads to southern Las Vegas to reiterate his blue collar—or in this case, brown collar—renaissance message with a stop at a UPS freight facility near McCarran Airport. It will be his second stop at a UPS facility in less than a year. Nevadans are really hurting: With foreclosures up and gambling-based tourism losses only recently rebounding, the state’s 12.6 unemployment rate is one of the country’s highest.

In 2008 Obama captured Nevada handily, by more than 12 points, after Bush twice won it. Obama led the Republican field in a pre-Christmas statewide poll, but only by single digits over Romney and Ron Paul. The Silver State gained one elector from the 2010 Census reapportionment. Like the stops in Arizona and Colorado sandwiched around it, Nevada has a significant Latino population. Like Obama’s final stop in Michigan, the union vote is essential for Obama to hold the state.

Colorado: Later on Thursday, Obama moves to Denver, site of his 2008 Democratic National Convention. He will address troops at Buckley Air Force Base, and his message will likely to shift to defense and security issues, as the president reiterates his SOTU.

Although Colorado experiences its own spate of foreclosures, the problem was less severe than it was nationally or in states like Arizona. But, similar to its other, fast-growing Southwest cohorts, Colorado features at least 100,000 age-eligible yet unregistered Latino voters. Like the Tucson-Phoenix corridor, the Boulder-Denver corridor is one of the pivotal, new-growth “ideopolises” identified by John Judis and Ruy Teixeira in their book, "The Emerging Democratic Majority."

“We were also encouraged to hear the President talk so much about clean energy, as Colorado is leading the nation when it comes to renewable energy research and development,” Democrat Gov. John Hickenlooper said of the president’s Tuesday night speech. “Many of the new jobs the President talked for this industry will be created in Colorado – and we are ready.”

Obama cruised to victory in Colorado in 2008, and according to an early December statewide poll he led all Republicans challengers, if only by two points over Romney. Along with states like Montana, New Hampshire and Ohio, Colorado was one of the great stories of Democratic resurgence in the middle of last decade. The party has since lost back some of those gains in other states, and Hickenlooper’s 2010 gubernatorial victory was a notable exception. Obama needs Colorado—a state which derives its name from a bastardization of the Spanish “color rojo,” for its famed red rocks—to remain true blue this November.

Michigan: It’s not yet clear whether Michigan will be in play in 2012, even if Romney heads the GOP ticket. But a late November 2011 statewide poll did have Romney ahead of Obama by five points. Obama won it in a 16.5-point landslide four years ago. If Gingrich is the nominee, the White House can probably worry less about Michigan.

The details of the president’s Michigan event have not yet been released. Given his SOTU remarks touting the government’s role in saving General Motors and Chrysler from ruin, the location and theme is likely to be auto industry-related, even though the president recently completed such a Michigan victory lap in late-October. Still, it’s never bad politics for any Democrat to find an excuse to press the flesh with the folks who press bumpers.

For the past three months, political eyes have been focused squarely on the Republican White House contenders. But after his State of the Union speech, the commander-in-chief shifts himself into campaigner-in-chief mode, whether or not the GOP has settled on a candidate yet. There’s no point in Obama wasting a valuable head start on the general election he didn’t enjoy four years ago.

Before he left for the five-state swing, Obama’s White House released an eight-page companion document  for the speech entitled, “Blueprint for An America Built to Last.” With 48 combined electoral votes to be cast this November by this quintet of states, as President Obama begins his quest to amass at least 270 electors to win a second term the “blue” part of blueprint takes on special meaning.