Ron Kaufman is one of the lobbyists who advise Mitt Romney, who is attacking Newt Gingrich for his lobbying past 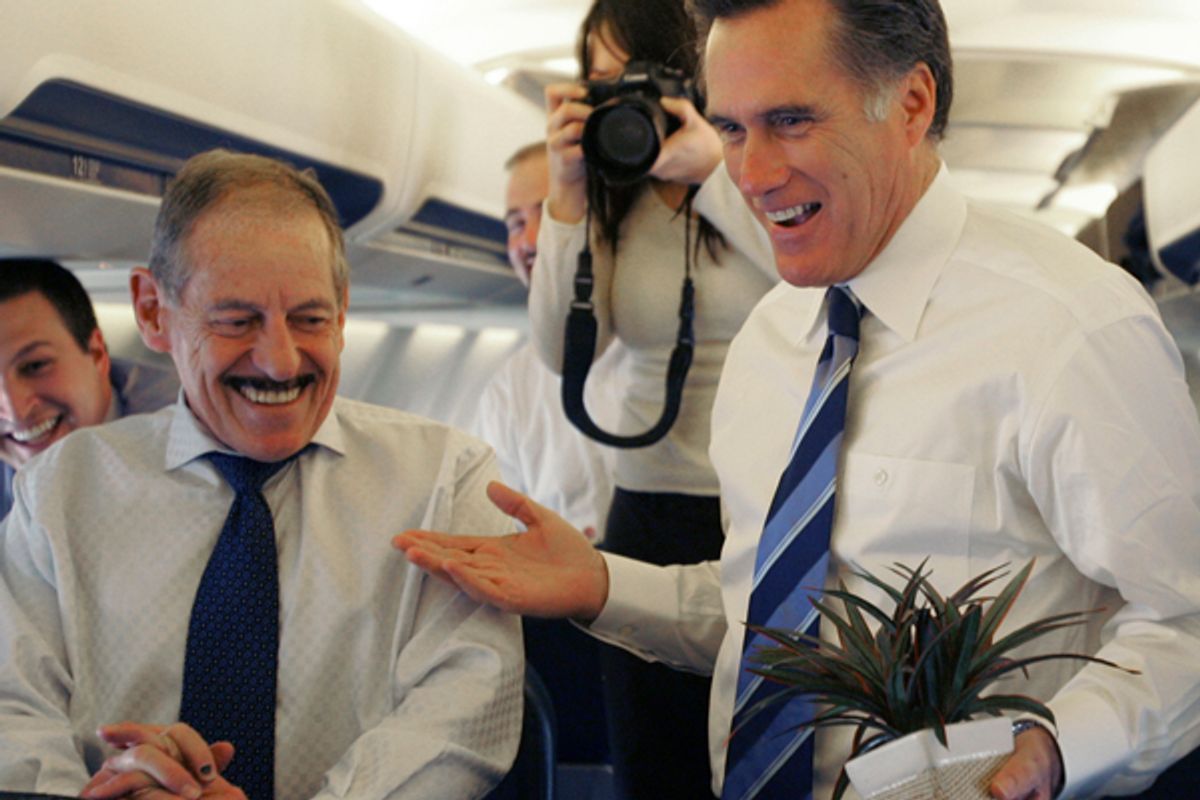 Mitt Romney, right, makes a joke with advisor Ron Kaufman and a potted plant on his campaign charter plane in Feb., 2008. (AP/LM Otero)
--

The Romney campaign has made Newt Gingrich's recent history as an unregistered "lobbyist" -- particularly his work for conservative bête noire Freddie Mac -- the key front in its attacks on him in Florida.

It's no surprise that Romney is using the lobbyist card: Polls consistently show that the American public view lobbying as one of the worst professions when it comes to honesty and ethics. More surprising is that the Gingrich campaign has not turned the tables on Romney by looking at the recent lobbying work of several of Romney's top aides.

I recently reported that informal Romney advisor Charlie Black, for example, lobbied for the DREAM Act, putting him directly at odds with Romney's position on the immigration legislation.

Another Romney aide who has broken from conservative orthodoxy in his lobbying work is top advisor Ron Kaufman, who "has been traveling across the country with Romney, providing advice and conducting strategic meetings," according to the Boston Globe.

Kaufman is currently listed on the website of international lobbying and public-relations firm Dutko Grayling as a senior advisor who is on leave. A longtime Republican operative, Kaufman worked on Ronald Reagan's 1980 campaign and held high positions in the George. H.W. Bush White House. He was also an advisor to Romney's 2007-08 campaign, a fact that sparked a famous argument between Romney and an AP reporter who challenged the candidate on his claim that lobbyists were not running his campaign.

Disclosure filings suggest that Kaufman stopped his lobbying work at the end of 2010. But before that, Kaufman had a healthy lobbying business representing a range of corporate clients.

In 2010, for example, Kaufman and a few other Dutko lobbyists were paid $110,000 to lobby for U.S.-Japan High-Speed Rail Inc. That company, which is associated with Central Japan Railways (JRC), is trying to get Japanese-style bullet trains deployed in the United States.

Outside of the healthcare bill, there is perhaps no other Obama policy that Republicans despise more than his proposal to build a high-speed rail network. Indeed, opposition to Obama's high-speed rail hopes seems to have killed any chances for construction of such a system any time soon.

Back in 2010, Kaufman and his colleagues were working to "create universal equal high speed rail standards that will lead to safe, efficient, and cost effective high speed rail solutions," according to lobbying disclosures (.pdf). They also lobbied Congress on the since-killed project to build a section of a high-speed rail system in Florida.

Among Kaufman's many other clients in recent years are Botox-maker Allergan and the In Situ Oil Sands Alliance, a Canadian group that lobbies in favor of the tar sands industry, which was dealt a blow recently when President Obama rejected the Keystone XL pipeline.

A Romney spokeswoman says that Kaufman is a volunteer for the campaign. He did not immediately respond to a request for comment.