The trouble with being the Swiss bank account guy 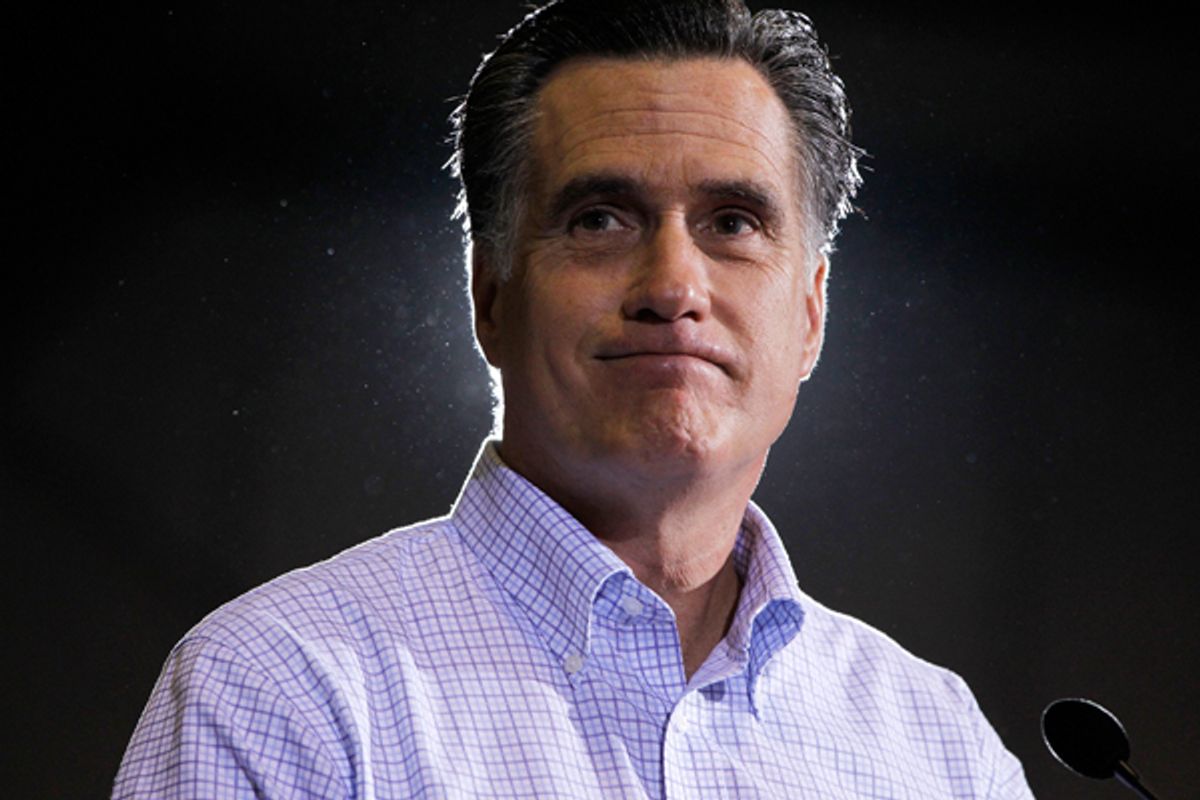 Newt Gingrich is going out of his way to emphasize Mitt Romney's top 1 percent-ness.

Asked about his opponent's position on immigration in Miami today, Gingrich invoked the tax records that Romney released on Tuesday: "You have to live in a world of Swiss bank accounts and Cayman Island accounts and making $20 million for no work, to have some fantasy this far from reality." And he's spent the past week using his own optional flat tax proposal to call attention to the low effective rate that Romney pays. "I'm prepared to describe my 15 percent flat tax as the Mitt Romney flat tax," Gingrich said in Monday night's Florida debate. "I'd like to bring everybody else down to Mitt's rate -- not try to bring him up to some other rate."

That Gingrich feels comfortable stoking resentment of an opponent's affluence and privileged lifestyle in a Republican primary campaign tells us something about the demographic evolution of the GOP. After all, when he first began blasting Romney's private equity history, a chorus of prominent conservative voices tore into him for engaging in the sort of "class warfare" that they associate with Barack Obama.

But Gingrich seems to have noticed that the key to his South Carolina landslide last weekend was overwhelming support from blue-collar and middle-class Republican voters. With those making between $30,000 and $50,000 a year, Gingrich crushed Romney by 20 points. With those making between $50,000 and $70,000, the margin was 16. But at the top end of the scale, it was a completely different story: Romney won by 15 points with voters making more than $200,000.

As I noted the other day, this same basic dynamic was evident in New Hampshire and Iowa, where exit polls found a direct relationship between enthusiasm for Romney and income level. The heart of the GOP base is increasingly composed of less-educated blue-collar whites, and it seems that -- even before Romney's Bain Capital record and tax returns became major media stories -- these voters already felt a powerful aversion to the former Massachusetts governor.  Romney's biggest Achilles' heel in the GOP race may end up being this income gap.

But his problem could extend well past the GOP primaries. As Greg Sargent wrote on Tuesday, the details of the latest Washington Post/ABC News poll show a similar income gap developing among the general election audience. In just the last month, Romney's unfavorable score among whites earning between $30,000 and $50,000 has soared from 29 percent to 49 percent -- a major reason why his overall favorable/unfavorable rating suffered a net negative loss of 23 points in the same period. As Sargent pointed out, blue-collar white voters represent a crucial swing constituency; they rallied hard to the GOP in 2010 but if they defect in measurable numbers this year, it will be tough for Republicans to unseat President Obama.

Clearly, the attention being paid to Bain and Romney's tax status is a major reason for the sudden jump in Romney's negatives among general election voters. But the source of his problem probably goes deeper, and Gingrich got at it with his Miami comment about Swiss bank accounts: Just about everything about Romney -- his upbringing, his education, his career, his lifestyle, his bearing -- exudes top 1 percent-ness. This may explain why his struggle to win over blue-collar Republican voters began long before the media obsessed over his tax returns. And it suggests that even when the current uproar dies down, the same basic image problem will (if he wins the nomination) haunt him with blue-collar swing voters in the fall.

There's some irony here, of course. After all, Romney's actual policy proposals are marginally less hostile to the middle class than any other GOP candidate's. As Romney tried to point out in Monday's debate, Gingrich actually wouldn't let every American pay the same tax rate as Romney -- because Gingrich's plan calls for the complete elimination of the capital gains tax. But Gingrich (even with the Tiffany account) just doesn't exude 1 percent-ness the way Romney does.

No matter whom they settle on as a candidate, Republicans will be attacked relentlessly by Obama for promoting an agenda that would pamper the super-affluent. The question they have to answer is how severely their defense will be complicated if they nominate a representative of that protected class.