What the Adelsons will want for their money 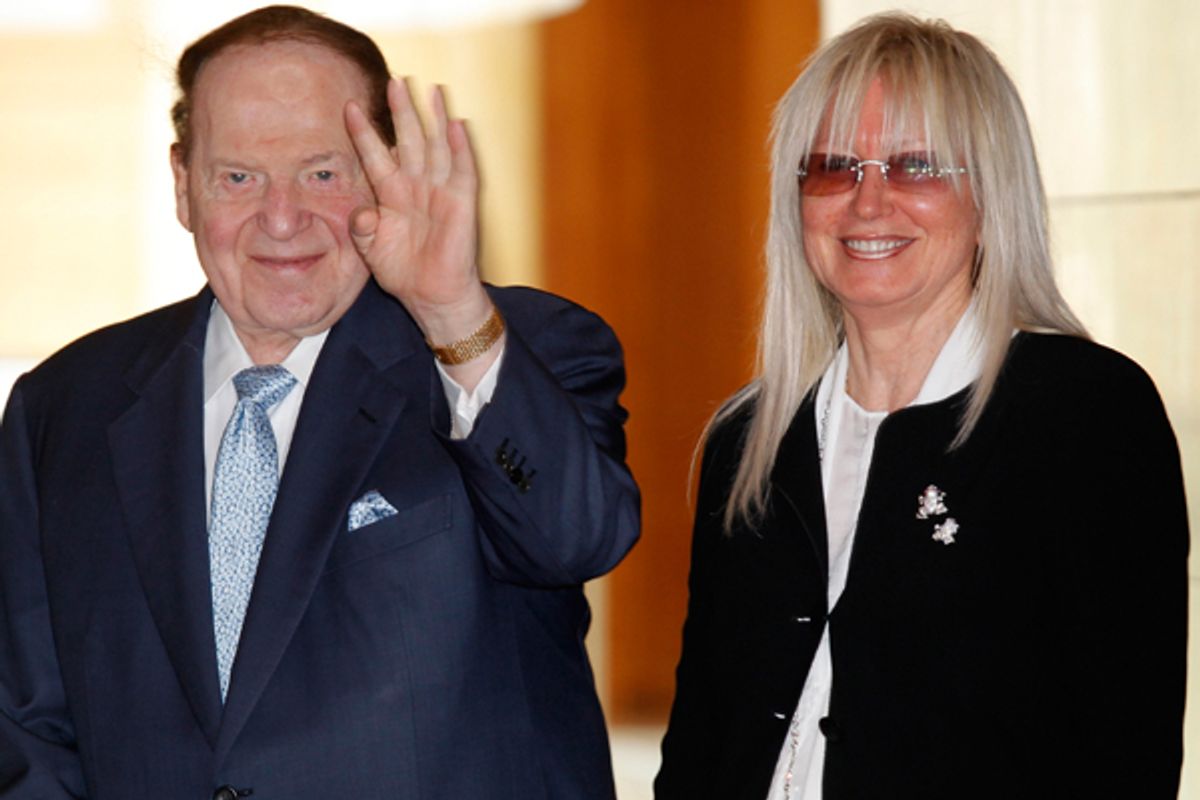 Casino magnate Sheldon Adelson and his wife Miriam have transformed the Republican primary by pumping $10 million into a pro-Newt Gingrich super PAC, thereby enabling his surge against Mitt Romney. So it’s surprising that comments Gingrich made last week about what the Adelsons expect in exchange for their money haven’t gotten more attention.

Ted Koppel asked Gingrich the key question: what do the Adelsons get if you win?

Gingrich, in response, suggested it all comes down to U.S. policy toward Israel.

Here’s the video, via Mondoweiss:

Koppel: But there has to be a so-what at the end of it. So if you win, what does Adelson get out of it?

Gingrich. Well, he knows I'm very pro-Israel. And that's the central value of his life. I mean, he's very worried that Israel is going to not survive.

That’s in line with what we know about the Adelsons, who have supported Israeli settlements in the West Bank and once pulled their money out of the American Israel Public Affairs Committee (AIPAC) because of that group’s putative softness on the concept of a peace deal with Palestinians.

ABC, meanwhile, reports that “a source close to” Adelson says he wants “nothing” in exchange for his contributions. That claim doesn’t amount to much, especially coming from an anonymous source.

The latest $5 million to the pro-Newt super PAC was donated by Miriam Adelson, who is reportedly a dual citizen of the United States and Israel. And here, as reported in the New Yorker, is a small but telling example of how Miriam previously interacted with the recipients of the Adelsons’ largesse:

The Adelsons seem not to take their power for granted. Recently, Miriam told an associate, “I had a CD on Islamic jihad. I brought it to the [Bush] White House and told the chief of staff, ‘I would like the President to see this.’ It really is amazing that we have this influence.”

And here is another episode from that New Yorker article in which Sheldon personally leaned on the president:

Secretary of State Condoleezza Rice was organizing a major conference in the United States, in an effort to re-start the Israeli-Palestinian peace process, and her initiative had provoked consternation among many rightward-leaning American Jews and their Christian evangelical allies. … A short, rotund man, with sparse reddish hair and a pale countenance that colors when he is angered, Adelson protested to Bush that Rice was thinking of her legacy, not the President’s, and that she would ruin him if she continued to pursue this disastrous course. Then, as Adelson later told an acquaintance, Bush put one arm around his shoulder and another around that of his wife, Miriam, who was born in Israel, and said to her, “You tell your Prime Minister that I need to know what’s right for your people—because at the end of the day it’s going to be my policy, not Condi’s. But I can’t be more Catholic than the Pope.”

So the idea that the Adelsons expect “nothing” from the recipients of their millions is belied by their previous behavior.

Gingirch himself seems to have gone through a transformation on the Israel-Palestine question. As Wayne Barrett recently documented, Gingrich was as recently as 2005 praising the Palestinians, referring to “their ancestral lands” in historic Palestine, and, amazingly, inveighing against “the desire of some Israelis to use security as an excuse to grab more Palestinian land.”

That’s the type of language – Gingrich even used the phrase Israeli “land grab” in that 2005 essay – one wouldn’t hear even from alleged anti-Israel radical Barack Obama.

Fast forward to the current election cycle, of course, and Gingrich has veered way to the right, famously questioning the very peoplehood of the Palestinians and blasting calls to end Jewish settlements as a “suicidal step” for Israel. (Adelson, by the way, personally praised Gingrich's claim that the Palestinians are an "invented people.")

It’s very difficult to determine whether the Adelsons’ money prompted the shift or has simply reinforced it. In any case, you can be sure Gingrich won’t be talking about the Palestinians’ “ancestral lands” any time soon.