Can Egypt reignite the Arab Spring? 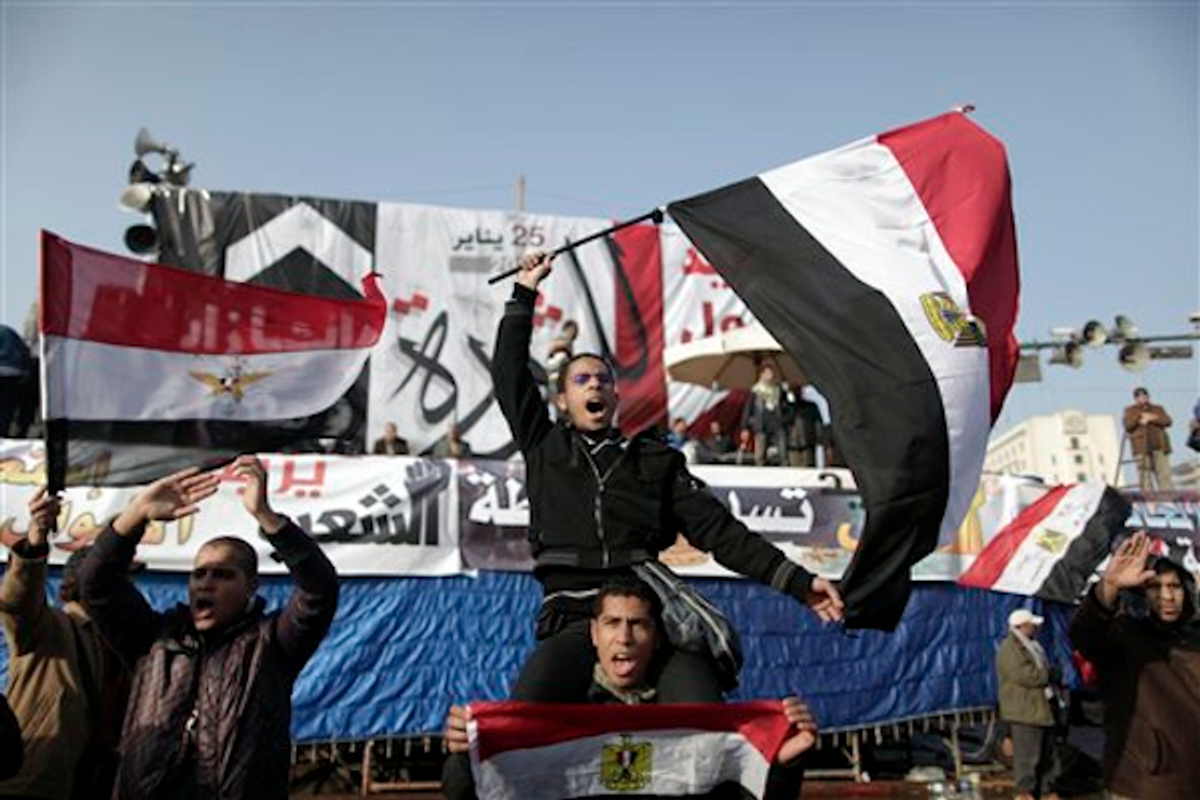 CAIRO, Egypt — It may have been the largest demonstration Egypt’s ever seen.

Hundreds of thousands — some boasted a million — descended on Cairo’s iconic Tahrir Square Wednesday to mark the first anniversary of the uprising that toppled President Hosni Mubarak and to call for an end to military rule.

The square was so packed that the crowds spilled onto the bridges and streets that fan out from the plaza and into Cairo’s downtown streets, with chants for freedom thundering against the area’s crumbling, colonial-era buildings.

The sheer number of demonstrators — as well as their insistence that celebrations of the so-called revolution be rejected — seemed to suggest Egypt’s young firebrand dissidents have a groundswell of support in their bid to fell the Supreme Council of Armed Forces (SCAF), a coterie of unelected generals that seized power after Mubarak's resignation.

But how well the revolutionaries can galvanize the thousands that turned out for the anniversary, which is a national public holiday and now wrought with symbolism, to help forge a sustained resistance to an increasingly repressive SCAF, is still unclear.

On Thursday morning, several thousand, some camped-out in tents, remained in Tahrir. A handful of leftist groups, including April 6, the Revolutionary Youth Coalition and the Kefaya (Enough) movement, declared an opened-ended Tahrir sit-in until the army cedes control.

The army-led democratic transition has so far been plagued by military trials of civilians, severe crackdowns on protesters and an uptick in sectarian violence — a more volatile version of Mubarak rule.

“The army repressed us and provoked us to demand our rights,” Joanna said.“We want a guarantee they will transfer power to civilians.”

The number of people, however, has dwindled to just a fraction of Wednesday’s demonstration, and traffic moved freely through the square.

Activists were calling for another mass demonstration after Friday prayers, a traditional day of protest that organizers hope will help maintain the anti-government momentum.

“I was never interested in politics. But when I saw the military attacking the woman in the blue bra, I realized we are living under tyranny,” said 25-year-old Amra Ahmed, an IT specialist marching from the impoverished Sayeda Zeinab neighborhood to Tahrir Square. “And this isn’t acceptable. This has to end.”

But support for prolonged protests has declined in many quarters as the Egyptian economy stagnates and the instability pushes millions even closer to the poverty line.

While the activists see their demonstrations as a noble effort to extract concessions from an oppressive regime, they also run the risk of alienating fellow Egyptians.

“The revolutionaries have not gotten beyond the stage of protests in the squares,” said Joshua Stacher, professor of Egyptian and Middle East politics at Ohio State University.

For many who want to see an end to SCAF rule but also to the unrest, the alternative lies with the Muslim Brotherhood. The movement’s Freedom and Justice Party, which now holds a majority in the newly-elected parliament, says civil legislation is the best way to usher the generals from power.

“I’m afraid for the country, it’s not going in the right direction,” said Hoda, an elderly woman also from Sayeda Zeinab. She did not want to give her last name.“I just want the parliament to do its job, and for a good president to take over and fix all of this.”

Despite the general harmony of Tahrir on Wednesday, the deep political divisions were not far from the surface.

As the sun set over the square, groups of young boys broke away from the crowds and began smashing rocks as they taunted police in riot gear defending the ministry of interior nearby.

There were no reports of violence between protesters and security forces overnight, but local shopkeepers were weary and unimpressed.

“These boys, they are the sons of dogs,” said one store owner.