The right wants to use the "slippery slope" of polyamory to discredit gay marriage. Here's how to stop them 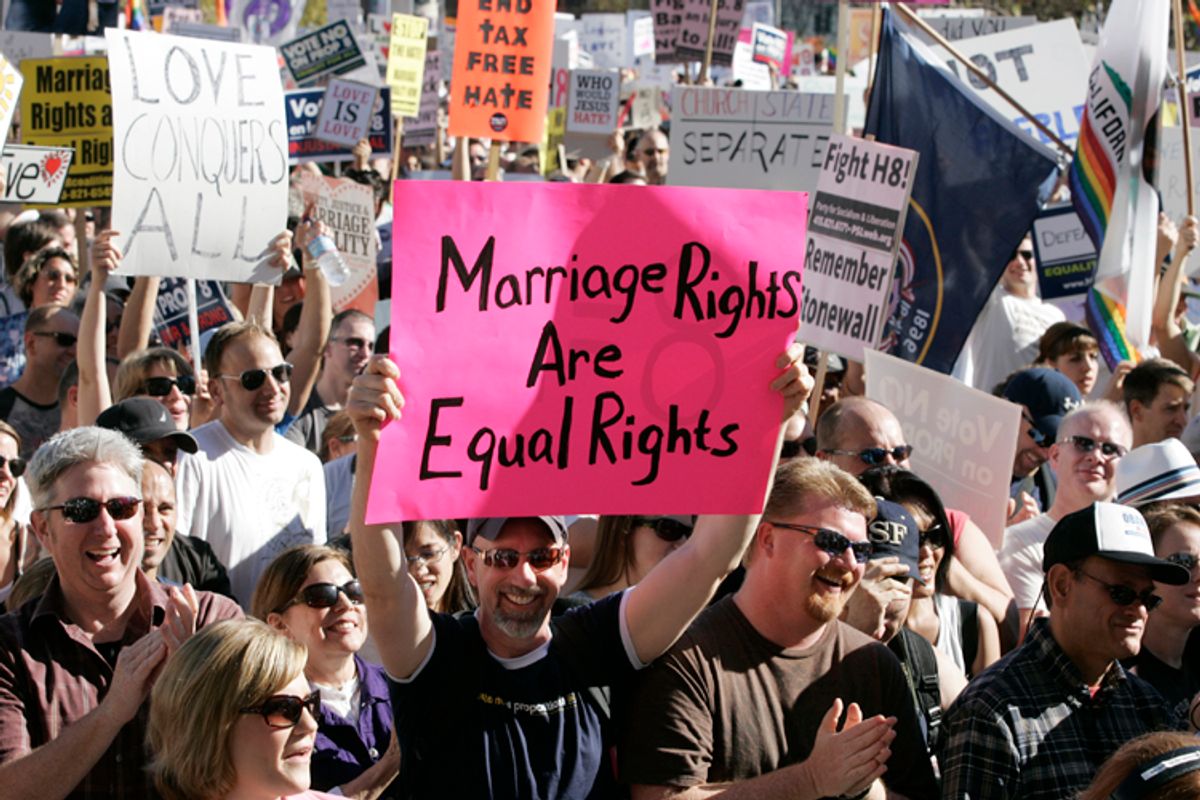 Newt Gingrich may have scored political points by refusing to talk about an ex-wife's assertion that he asked that their marriage be “open,” but he also thrust polyamory into the national conversation.

This was new territory for many people, but not for LGBT advocates, who hear about it all the time. Won't legitimizing same-sex marriage lead to legitimizing polyamorous relationships too? If two men can marry one another, why not one man and two women?  This argument is a favorite of former U.S. Sen. Rick Santorum, the so-called Christian right and the right-wing blogosphere.

Responding to these arguments is a challenge. On the one hand, I reject the tactic of distinguishing the good gays from the "bad" poly people. Further marginalizing the marginalized is just the wrong trajectory for any liberation movement to take. And it reminds me of the way that some mainstream gay activists have sold out transgender and gender-nonconforming groups. We’re the married gays who make neighborhoods stable and herald the arrival of cool coffeehouses; we're not those awful drag queens. This is all trash, it sells out members of our own community who deserve more than that, and it’s a punt, really, not an argument.

On the other hand, I don’t want to fail to draw any distinction, either. I don’t know what polyamory’s approval ratings are, but I bet they aren’t high -- Newt Gingrich notwithstanding. At the very least, it would be bad politics to agree and argue that there really is no difference.

How about this response, instead: to question whether the “slippery slope” is the right way to argue at all.  Philosophically speaking, it certainly isn’t. You don’t decide the ethical value of a decision based on other decisions; you decide based on the decision at hand. Is euthanasia of a brain-dead human being morally permissible? Maybe or maybe not, but the answer does not depend upon the slippery slope of whether it’s permissible in other cases, say, of chronic pain, or mere dislike of aging. The slippery slope is a dangerous fallacy.

Of course, policy is not the same as philosophy, and in policy discussions, the slippery slope is commonplace. We draw bright-line rules to prevent slippery slopes all the time, even if the lines may be a little over- or under-inclusive. Driving a car while texting may be safe if you’re an excellent driver or if you’re on an empty road. But we as a society can’t get into those details, and if we allow even some texting, we might allow too much. So, bright line: no texting while driving.

Some value choices, though, are just too important for bright-line, prevent-slippery-slope decision making.  Marriage is one of them. It affects too many people, and asks too many important questions on its own.

Consider interracial marriage. When the Supreme Court held that it was a constitutional right in the case of Loving v. Virginia, it represented a change from centuries of law and custom (including what some called a Biblical justification: Genesis 9:25, the "Hamite myth"). And, indeed, the precedent it set led to various slippery slopes of subsequent court decisions. Yet the decision was right. The laws were racist. They violated the Constitution. And, although obviously not part of the court’s ruling, they were morally wrong as well.

As it turned out, Loving was part of a “slippery slope” of personal liberty cases that also includes Roe v. Wade, cases we still argue to this day. But it’s a common occurrence for Supreme Court opinions to recognize that they may open doors to other questions, but expressly reserve judgment on them for later.

We should do the same when it comes to polyamory: just decline to answer. Really, there are a host of questions that arise in the case of polyamory to which we just don’t know the answer. Is polyamory like sexual orientation, a deep trait felt to be at the core of one’s being? Would a polyamorous person feel as incomplete without multiple partners as a lesbian or gay person might feel without one? How many "truly polyamorous" people are there? Are there compelling policy reasons why we would want to discourage polyamory (as we do incest or sex with minors), or are those reasons really just fears? These are all important questions, and the answers are not self-evident. We don’t really know.

Yet we do know the answers when it comes to same-sex marriage. We do know that sexual orientation is "a deep trait felt to be at the core of one’s being." We do know how incomplete and alone many gay people feel without the possibility of fully accepted partnership, and we know there are millions of gay people out there in the world. We do know that the policy arguments sometimes brandished against gay people (child welfare, encouragement of homosexuality) are hot air, unsubstantiated by evidence.

These are all important bits of information that we lack when it comes to polyamory, but that we possess when it comes to homosexuality. We as a society are in a position to make an informed decision about same-sex marriage, but not yet, it would appear, about polyamorous relationships.

This position neither endorses nor rejects such relationships. And because the distinction is one of process (how to make an informed decision), rather than substance, it clearly distinguishes same-sex marriage from polygamy and polyandry, without stigmatizing the latter.  Now, it may alarm some people not to totally shut the door to legitimized polyamory. Maybe it’s not a strong enough rebuke to curry favor with some conservatives. But it is the only intellectually responsible position for LGBT activists (and allies) to take. Whether Newt is our ally or not.