The shame and pride of joining food stamp nation

For me, signing up for the most stigmatized benefit felt like a defeat and a victory 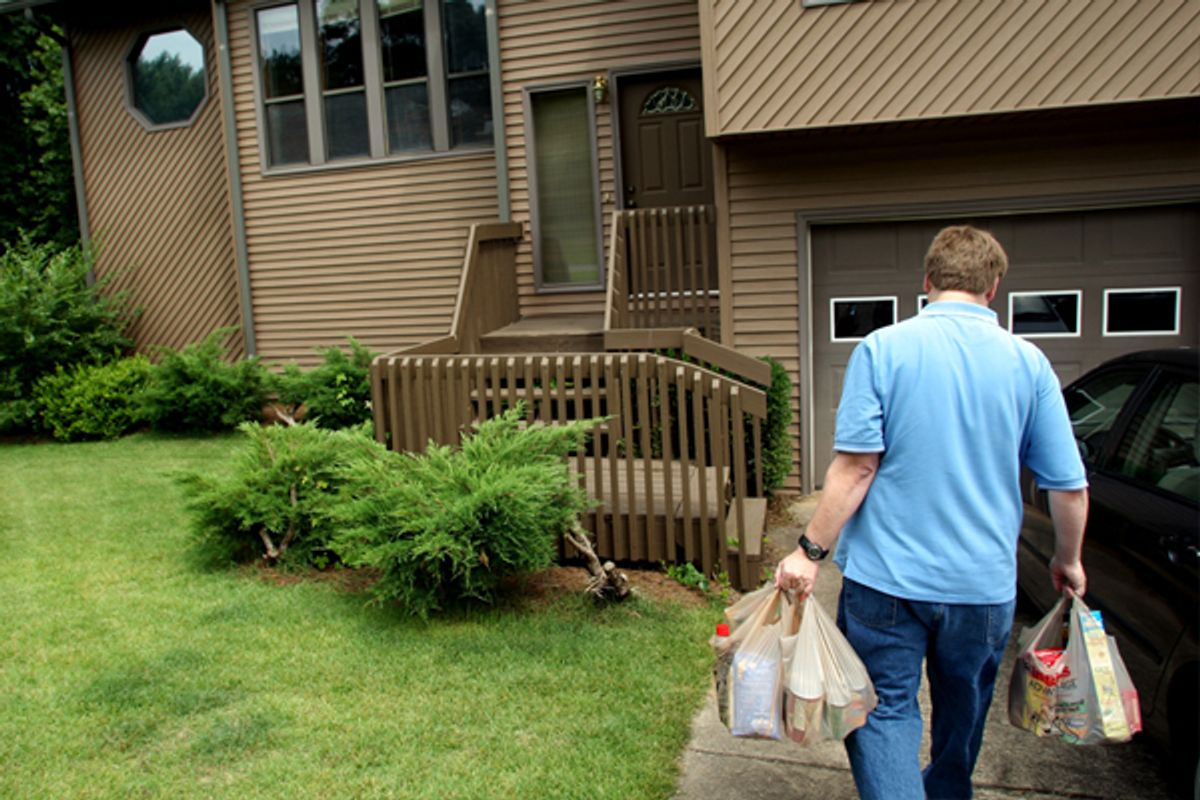 I walk through the pasty government-issue fluorescent light and bureaucratic cinderblock waiting room, ushered into the inner sanctum of welfare benefits review. I feel oddly privileged, striding past rows of glum, tired, bored and frustrated faces; how have I been picked out so quickly, after just 15 minutes of sitting?

Getting inside doesn't mean you'll get approved, but, like waiting in a doctor's lobby, sheer movement into a different room gives one hope.  Progress.

My benefits counselor, a tall, stocky, healthfully heavyset Indian man, speaks like a machine gun.  "Fifty-five," he says brusquely as he waves his arm at a numbered booth in a long row of numbered booths.  I'm still non-caffeinated so it takes me a moment to realize what "55" means, then I take my seat across from him.  It looks (and feels) like I'm in prison.

I quickly hand him everything: my driver’s license, threadbare Social Security card with my awkward childhood signature, and my passport complete with its January 2011 stamp from India (I hope he notices).

He asks me, rat-a-tat-tat: “Unemployed?  How much per month?  Self-employed?  Pay by cash or personal check?"

"You have pay stubs?  Pay in cash or personal check?”

I show him a few scattered check receipts from a folder.  Four hundred and fifty dollars here, $100 there, another for $200, another for $500.  This is the writer's life today.

"And how much is your rent?  Other bills?"

Chakim looks at me quizzically.  "So how are you surviving?  Your rent is higher than your income?"

Savings, I tell him.  It's true: For the past few years, as a semi-accomplished, mid-career journalist and writer, I've been scuffling in the always difficult, but now beastly hard choppy waters of freelancing, supplementing my obscenely low (often under $15,000) income with some money my grandmother left me years ago.  Combined, in the city of San Francisco, I live on something around $20,000.  Every year, even as I work my butt off scrambling for assignments and clients, that little nest egg shrivels frightfully smaller. Now it's almost gone, and though I've had some good little runs here and there with work, I'm hurtling precipitously toward poverty.

I'm hardly alone in my marginally privileged plight: As Huffington Post reported in June 2010, food critic Ed Murrieta went from restaurant-hopping with an expense account to living off a $200-a-month food stamp allotment. According to the USDA, 46.3 million Americans depend on food stamps to survive — a historic high, due to recession and population growth.

The soaring food stamp rolls, though quite predictable in the midst of a deep recession, have inspired wealthy Republican candidates for president (is there any other kind?) to brand Barack Obama "the food stamp president," even though, according to USA Today, the rolls rose more sharply under President George W. Bush.

Roughly one in six Americans (one in five children) does not have reliable access to food. According to USA Today, citing census data, nearly half the country is poor or low-income.  Even as unemployment eases modestly in some places, the vast underbelly of America is, economically and nutritionally, underfed.

I call myself frayed white collar — part of the privileged poor.  I have a college degree, a career and an array of middle-class, working-class and more economically privileged friends; together we are a fairly good representation of the 97 percent, or maybe the 95 percent.  And most of us are hard-pressed; even my teacher friends, making about $60,000 a year, are perpetually flat-lined economically, eking across each month's finish line thanks to credit cards.

Back in the benefits office, Chakim clicks away at his mouse with big, thick fingers, rifles through his accordion folder, thrusting papers in front of me: “Sign.” I look up at him questioningly.  "Sign," he says again.  "I'm trying to help you.  Just sign."  So I do.

"Getting unemployment now?  Been on food stamps before?"

"No, no unemployment.  This is my first time on food stamps," I tell him. "Except for when I was a kid."

Behind Chakim, against the opposite wall, a prank coffee mug, sliced in half, reads: "You asked for half a cup of coffee."  Here in America's embattled public benefits land, that sure feels like a metaphor to me.  Still, just to warm things up, I tell Chakim I like his coffee mug.

Within minutes, Chakim pulls out a Department of Human Services form titled "Food stamps intake follow-up," jotting down my name and case number, and, benevolently, checks off the box where it says I will be certified for food stamps for 12 months.  I'll be “required to complete Form QR 7, Quarterly Eligibility Report, once every three (3) months.”

I feel a rush of saliva in my mouth, as if I'm about to taste food.  I'm not remotely going hungry, my pantry and fridge are at least modestly attended by basic solid good foods (bags of greens and turnips and broccoli from farmers' market, organic chicken in the freezer).

But as Chakim readies my approval documents, I taste a happy relief, imagining myself with my shiny new electronic benefits card, stocking up each month without moving toward destitute quite so quickly.

As I mentioned to Chakim, perhaps to curry sympathy, I grew up on food stamps.  In the 1980s, while Ronald Reagan was raising the frightful specter of "welfare queens driving Cadillacs," my single mother and I relied on food stamps for years, even when she worked at a health food store in Boston.  We muddled through with her poverty wages, food stamp booklets, and, sometimes, slightly bruised but totally edible produce the store couldn't sell.

I don't recall ever feeling ashamed about being poor.  To me, those booklets of food coupons were like Monopoly play money, and they kept us going.  But now I'm 44, single, nobody to feed other than myself, and as Chakim signs the final papers, my sense of victory quickly feels like defeat.  How have I "sunk" to this unkind station where, if I don't get help or significantly boost my income, I could soon be ass out on the unforgiving streets?

As I leave the cinderblock edifice, passing people huddled around the entrance smoking cigarette butts, a wave of shame and sadness comes over me.

How have I fallen back to where I was when I was a food stamp, Head Start kid (getting, yes, free lunches)?  America is supposed to be the engine of progress, and each of us is assigned the "promise" and, effectively, the duty, of keeping up that steady march.  Even though I never bought the American narrative of progress and opportunity, I somehow feel like a bumbling screw-up for not holding up my end of the bargain.

With my "Golden State Advantage" benefits card in hand, I move quickly from shame to guilt. Why?  After all, I pay taxes, even if not very much on my poverty-level income (effectively about the same rate Mitt Romney pays on his thus far untold millions a year in investment income). Oh yes, of course, this is bootstraps America, land of free capitalistic opportunity.

Public assistance has always carried the puritanical stink of stigma and guilt.  As Francis Fox Piven and Richard Cloward explained in their classic book "Regulating the Poor," guilt and shame have long been intentional features of public aid — along with various forms of coerced labor and invasive monitoring — dating back to England's poor laws of the 16th century, through to today's much demonized welfare capitalism in America, where Republicans goad and bait our nation's first black chief executive as "the food stamp president.”

Along with personal guilt, there is my broader political concern: that by adding to the food stamp rolls, I'm diminishing Obama's chances of reelection (not that I'm a fan, but the Republicans have embraced full-fledged barbarism, threatening to destroy what little is left of the safety net).

But as a low-income progressive writer (talk about redundancies!) I'm committed to a couple of things: getting myself fed, and getting out the word that being on food stamps — or expanding them as president — is about as far from a crime as one can get.  Despite my personal response to being on the dole, the fact is, these benefits keep people alive. They keep people eating, and they keep others working, by essentially subsidizing the market for food retail.

Perhaps most important, food stamps are not the problem, nor are they the solution.  They are a basic Band-Aid that barely keeps people afloat, while America's corporations and the exceedingly rich make off like bandits, vacuuming their profits away from the public treasury.  One might say that's "another story," but in fact rich people like Mitt Romney (and Newt Gingrich, for that matter) evading taxes while blaming the poor for living off virtually nothing — that's the real story we should be talking about.

As I walk through my gray shame and guilt in the cold overcast morning, I treat myself to a panic cigarette on my way to Whole Foods, where my purchases amount to coffee and a carrot and an apple ($1.88, more than half the daily individual food stamp allotment) to augment my homemade tofu veggie stir-fry lunch.  My electronic benefits transfer card won't be activated until tomorrow. Then I'll feel rich indeed.

Christopher D. Cook is an award-winning journalist and author. His work has appeared in Harper's, The Economist, the Los Angeles Times and elsewhere. He is the author of "Diet for a Dead Planet: Big Business and the Coming Food Crisis." He can be reached through www.christopherdcook.com.