Many big premieres disappointed, but the indie-fest was full of vital, challenging films. Here's what to look for 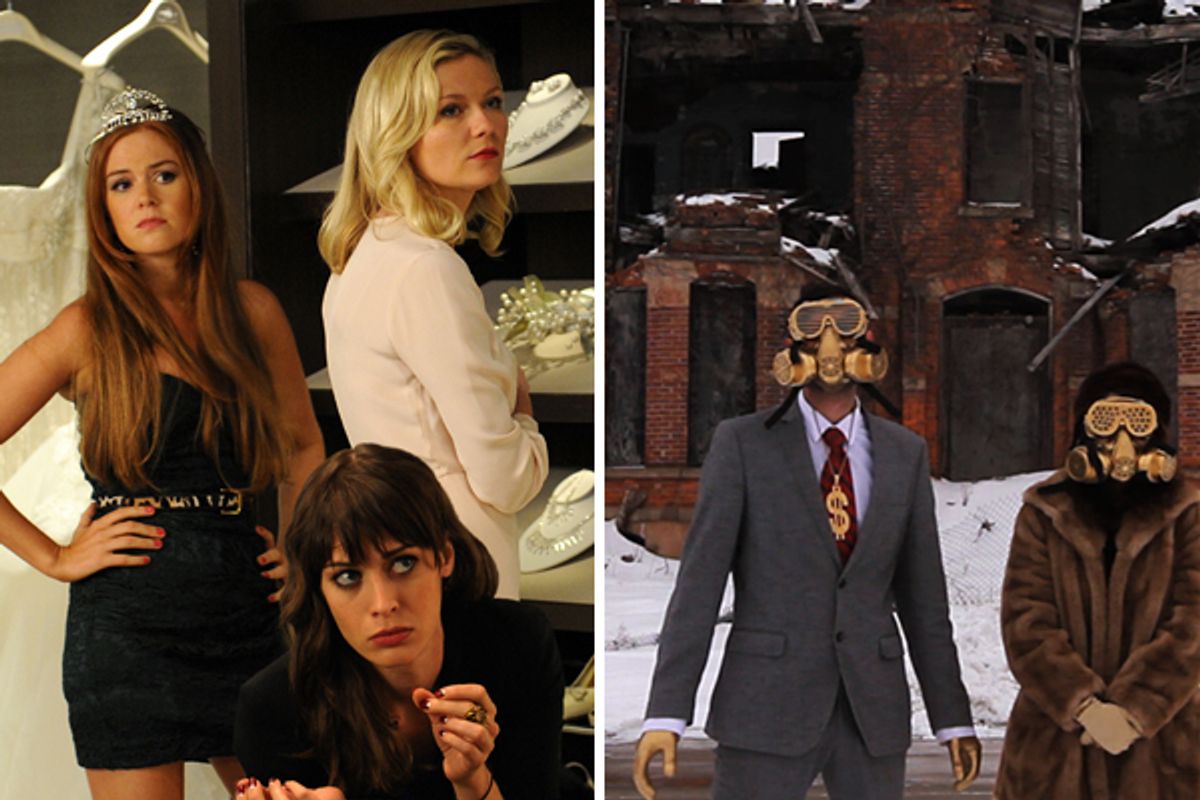 Scenes from "Bachelorette" and "Detropia"
--

Halfway through this year's Sundance Film Festival, I probably would have told you that it looked like an exceptionally weak year at America's biggest showcase for independent film. This has been a high-anxiety winter in the Utah mountains, where the snowpack was almost nonexistent before Mother Nature dumped a fresh load last weekend. I spent much of the festival attending the so-called big-name premieres at the Eccles Center, the 1,270-seat auditorium at Park City High School that serves as Sundance's biggest and most prestigious venue, and in general those movies ranged from muddled to mediocre to atrocious.

Stephen Frears' "Lay the Favorite," with Bruce Willis and Rebecca Hall, is a lightweight sub-Hollywood farce; Julie Delpy's "2 Days in New York," starring herself and Chris Rock, is a halfway agreeable mess; Nicholas Jarecki's "Arbitrage," with Richard Gere and Susan Sarandon, is a decent corporate-world thriller. And while I'm delighted to defend Spike Lee's "Red Hook Summer," it's a rough and rugged ultra-indie production that disappointed many viewers. If none of those films is life-changing, none is even half as bad as Rodrigo Cortés' "Red Lights," a moronic paranormal mystery featuring the latest dispiriting Robert De Niro performance.

That wasn't where the action was at Sundance 2012; indeed, in this downsized era I suspect that the festival's customary mode of programming around a handful of star-studded, audience-friendly premiere screenings doesn't work anymore. By the end of the week, festival director John Cooper looked a bit fretful introducing those big Eccles screenings, as if realizing he was about to underwhelm a thousand strangers. On the other hand, this was an exciting festival for documentaries and more challenging dramatic fare, and quite a few of this year's movies have been picked up for distribution, mostly at discount prices. (With one major exception: Ben Lewin's "The Surrogate," a would-be Oscar contender starring John Hawkes and Helen Hunt that I haven't seen yet.)

Sundance will award its own proliferation of prizes this weekend, and honestly there are so damn many of them they don't have much impact. So what should you be looking forward to seeing over the next several months? In keeping with past years, I'm awarding my own much-coveted grand prizes, just one each in the narrative and documentary categories, along with a list of five more especially hot titles to watch for in each division. Please note that the normal level of subjectivity is exaggerated here by an epic level of entropy and randomness -- I could make an alternate list of Sundance movies I heard were terrific and haven't yet seen. (That list might start with Rick Alverson's Brooklyn-hipster satire "The Comedy," which isn't exactly a comedy, Alison Klayman's documentary about the most prominent dissident Chinese artist, "Ai Weiwei: Never Sorry," and the LCD Soundsystem concert doc "Shut Up and Play the Hits.")

If Sundance 2012 produced few obvious box-office hits and awards contenders, it strikes me as an important year of transition, with lots of movies that got people arguing and should keep on doing so. Times of turmoil and crisis, after all, tend to produce the most exciting art. If they also produce unintentionally hilarious movies in which Robert De Niro plays a blind, self-levitating psychic ("Do you doubt my powers? DO YOU DOUBT MY POWERS?"), I guess we'll live with that.

I've already reviewed this breakthrough work from New York indie-film veteran Ira Sachs, which is both a fearless autobiographical examination of a drug-fueled long-term relationship and a delicate, almost anthropological examination of American gay life at the turn of the millennium. I fervently hope that "Keep the Lights On" can reach beyond the traditional limitations of the gay-cinema audience (which is pretty large, to be fair), because it's a beautifully made American film anchored in a mesmerizing central performance by Danish actor Thure Lindhardt, who's now ready for his crossover moment.

Kirsten Dunst unleashes her inner bitch as the supremely mean protagonist of writer-director Leslye Headland's "Bachelorette," an exceptionally smart character drama masquerading as "Bridesmaids"-style raunch. Lizzy Caplan, Isla Fisher and Rebel Wilson -- playing the overweight bride formerly known as "Pig Face" -- round out the superb, female-centric cast. This movie will play even better in big cities than it did at Sundance.

I will admit that I've only seen the trailer for New York-to-New Orleans transplant Benh Zeitlin's "Beasts of the Southern Wild," -- I kept passing it up for another mediocre, semi-mainstream comedy -- so I have no idea whether I'll personally like it. But this allegorical, apocalyptic fable about a 6-year-old girl's odyssey through the hallucinatory swamplands of southern Louisiana still belongs on the list, since it played to nearly universal acclaim and was clearly the biggest surprise in the entire festival lineup. (It was acquired for release by Fox Searchlight.)

Screenings of Craig Zobel's claustrophobic "Compliance," which is based on a real-life case in which a prank caller masquerading as a cop convinced a fast-food manager to detain and abuse an employee, turned into a participatory sport. Some viewers accused Zobel and his cast of exploiting the episode or inflicting more abuse on both the cast and the audience, while others leapt in to defend him. I'll discuss my reservations and convoluted response some other time; suffice it to say you should decide for yourself.

As personally instructed by Spike Lee, I've already told readers that "Red Hook Summer" is not a sequel to "Do the Right Thing." But to my taste, Lee's journey back to the streets of Brooklyn -- and to low-budget production values -- produces his most heartfelt picture in years. This shaggy-dog, discursive fable of an Atlanta boy sent to spend the summer with his preacher granddad (the terrific Clarke Peters) may be flawed on various technical levels, but it's a passionate and painful tribute to black Brooklyn, black America and the black church that will resonate with many viewers and profoundly irritate many others.

Speaking of irritation, I've already aired my grievances about Antonio Campos' "Simon Killer," a marvelously crafted Parisian nightmare starring Brady Corbet as a Yank drifter who falls in love with a hooker (French actress and filmmaker Mati Diop, simultaneously vulnerable and tough as nails). But I have to admit that "Simon Killer" stuck with me, visually and thematically and emotionally, through a whole week of watching other people's movies. Like it or hate it, it confirms Campos' status as an extraordinary talent who's doing it his way.

Heidi Ewing and Rachel Grady, the documentary dynamic duo behind "Jesus Camp" and the powerful abortion film "12th & Delaware," have created an elegy to the Motor City that transcends statistics and sociology and reaches closer to poetry. With a population that has shrunk by more than half in 50 years, and almost 40 square miles of empty land inside the city limits, Detroit is the test case of America's deindustrialization, and a laboratory for what might come next. "Detropia" isn't a social-issue film and doesn't advocate for particular policies; rather, it's a gorgeous and tragic tribute to the immense symbolic power of Detroit and to the people who still live there.

Both inspirational and tragic, David France's "How to Survive a Plague" is more than another testimonial to the worst years of the AIDS epidemic (although if you lived through that period in New York, the evocation is immensely powerful). France specifically tracks how the activist movements ACT UP and TAG -- primarily composed of sick and dying gay men -- worked to force science, business and government to pay attention to them, and ultimately became insiders who helped drive innovative discoveries that transformed HIV infection into a manageable disorder. As the film makes clear, this wasn't just about AIDS and gay people, but a wide-ripple political movement that permanently reoriented the relationship between those in power, sick people and their advocates.

If your immediate response to the idea of a movie about the controversial performance and installation artist Marina Abramović -- and her plan to sit at a table in the Museum of Modern Art all day, every day, for three months -- is to snort with derision, then you're completely ready for Matthew Akers' documentary "Marina Abramović: The Artist Is Present." More than a retrospective portrait of an eclectic art-world pioneer and her influential work and ideas, Akers' film is also a moving and masterfully constructed exploration of what makes art -- or anything else -- worth doing in the first place.

Making a film about an idea, rather than a political issue or a specific historical incident, is devilishly difficult, but the ingenious Canadian documentarian Jennifer Baichwal ("Manufactured Landscapes") pulls it off in "Payback," which explores the concept of debt through many of its juridical, environmental and moral ramifications. Baichwal bounces from an essay by Margaret Atwood through a blood feud in rural Albania, a remorseful Canadian prison inmate, the disgraceful conditions faced by immigrant tomato pickers in Florida and numerous other people and places -- and if the combination feels ungainly at first, it's ultimately haunting, beautiful and strangely optimistic.

Photojournalist turned filmmaker Lauren Greenfield turned an assignment to shoot a couple who were building the largest house in America into the hilarious and upsetting film "The Queen of Versailles," which played on opening night at Sundance. You can't feel too bad about Florida time-share king David Siegel, whose collapsing empire has left the couple's 90,000-square-foot MegaMcMansion sitting unfinished in the swamp, but his likable wife, Jacki -- she of the modest middle-class background and extensive cosmetic surgery -- becomes the heroine of an intensely symbolic Recession-era saga that feels like an updated Russian novel on steroids. (I do blame Jacki for the pet lizard, though.)

While Rodney Ascher's profoundly strange "Room 237" will no doubt appeal most to film critics and other hardcore movie buffs, it was an absolute sensation at Sundance and could easily inspire a widespread cult following. (Especially because it may prove to be unreleasable in theatrical form.) As 1.3 percent of you will already have figured out, this is a movie about another movie -- Stanley Kubrick's "The Shining" -- and the outrageous, often demented conspiracy theories that have sprung up around that misunderstood masterpiece and/or overcooked horror farrago. (You take your pick.) Composed principally of copyright-challenging clips from "The Shining " and numerous other Kubrick movies, this is an ingenious trip down the rabbit hole into the alternate universe of movie-geek paranoia, some of which -- I'm not telling! -- may just be borderline not-crazy.