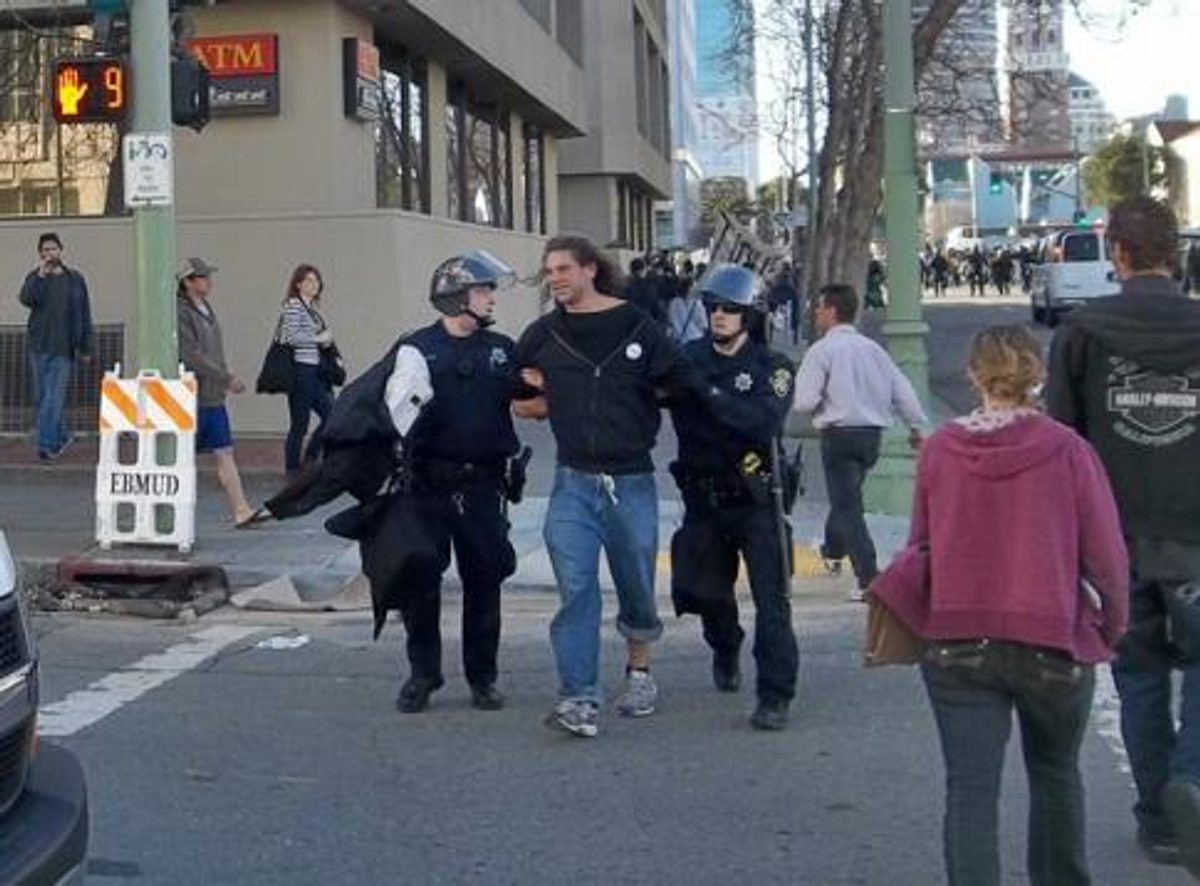 This report also appears on Kevin Army's Open Salon blog. See something important happening at your local Occupy protest? Blog about it on Open Salon -- and we might cross-post your report on Salon

On Saturday, Occupy Oakland held their largest action since the Port Shutdown in December. It was “Move In Day,” and the goal was to Occupy a vacant building. I wasn't really sure how I felt about this action, in part because the Occupiers had to keep the identity of the building secret. I wasn't necessarily against, but let's just say I was undecided.

When I'd first started visiting the camp back in October, I hadn't been sure about it either, but after I'd been there several times, I saw something beautiful grow that I'd never expected. So, I've learned to give Occupy Oakland the benefit of the doubt.

The day began with a rally at noon at Frank Ogawa/Oscar Grant Plaza. I asked many people if they were planning to enter the building. Almost everyone said they were uncertain, they would wait and see how things were going. There were about 500 people gathered.

The march to the building left at 1 PM. Right away a man tried to drive his car through the march. He got mad, the protesters got mad and it did not look good. Some people stepped in, cleared the way, and after a while he drove off. The tension of that moment carried through most of the day and into the night, though there were moments of relief too.

After a few blocks, we came across police blocking off certain streets, herding the protesters through Laney College. By this time there were over 1,000 protesters. It was becoming clear that the police knew where the protesters were going; the secrecy was in vain. I ended up walking around and taking a different route, as I had promised myself I wouldn't get arrested or hurt. I learned the targeted building was the Henry J. Kaiser Convention Center, and I proceeded there with caution. The Kaiser Center is vacant and is not currently in use.

As I watched the larger group moving toward the building, it looked like a trap. Very soon after the protesters arrived at the Kaiser Center, the police fired tear gas into the crowd. Those of us standing two blocks away could taste it. Later, when I spoke to people who had been at the front, everyone said they Occupiers had done nothing to provoke the tear gas other than arriving at the building.

The police had effectively made it impossible for the Occupiers to carry out their plan, so the protesters moved on. A few blocks away a standoff occurred. The police fired many things into the crowd; some thought it was tear gas, some thought it was pepper spray bombs. Also, I believe this was when they fired some bean bag shots at the crowd, later I met one man who had been hit.

Eventually people went back to the plaza. It was announced that we would take a break and then attempt to try to Occupy a different building.

One of the remarkable things about Occupy is how kind people are to each other. As I have at other protests here, I met many good and decent people with whom I had great conversations. Most of these people really care about the state of our world, and have embraced this movement with gratitude for having a place where they can figure out ways to take that caring and turn it into tangible action.

I point this out because no matter what the mainstream media says about Saturday's action, there's a big piece of the story that can only be absorbed by walking with these people and getting to know them. The heart of Occupy Oakland is so good. It's been a bit broken by all the repressive police actions, ranging from waging war on the Occupiers the day of the first raid, to arresting people for things as petty as taking a blanket out of a garbage can. In spite of all the attempts to break the the movement's heart and destroy it, it continues on, beating strongly and moving forward.

When it was time to begin the second march, the crowd was probably back down to about 700. The group remained remarkably upbeat and determined. We arrived at the “alternate” building, and got herded away by the police. So people marched around, continually getting corralled and surrounded. I stayed behind, and the friend I was walking with noticed police coming at us from both directions. We decided to get out as it looked like a bad place to be. Our only exit was toward the police. On our way, an officer told us to turn around. I held out my homemade press pass and said we just wanted to leave. He told us we couldn't and said, “You choose to be here." He sounded pretty angry, and we were getting worried. We turned around, which basically meant we were heading right into the adjacent street where everyone was being corralled. But, the police veered towards that crowd, leaving enough of a gap for us to move past them and get out.

There was a wire fence on one side of the Occupiers, and some of them pushed it down and everyone escaped across a vacant lot. They ended up in front of the YMCA on Broadway. I heard reports that some protesters entered the building and ran out the back. A large group in front of the Y got surrounded by police. Many were arrested.

It was later reported that some people had broken into City Hall. I went down there and they had come out of the building and police were blocking it off. Someone burned an American flag, which I'm sure will be the most written about moment of the day.

I saw ambulances coming down the street. I saw a very young woman on the ground. She had been beaten earlier, and she had to go to the hospital. She was screaming in pain as they carried her on a stretcher to the ambulance. Apparently her only crime had been being present at the protest when she was beaten by the police.

I heard similar stories of the police randomly beating people or arresting them throughout the day, often just going for whomever was closest. The radio (KCBS) said over 300 people were arrested, which explains why by 11 PM there were so few people around.

The Oakland Police were recently court ordered to report their actions to a federally approved overseer. If the cops don't keep their violence in check, the judge will put the department under federal administration. I couldn't help but wonder if the department just decided to give a big screw you to the judge and take their brutality to the next level.

Whether the action of Occupy Oakland was right or wrong, the tactics and actions of the OPD I witnessed and heard of were pretty extreme, and they behaved irresponsibly toward the citizens who weren't involved in any of this. While walking along Lake Merritt to the Henry Kaiser Center, I saw two mothers pushing strollers with young children. They didn't look like Occupiers, so I stopped them and warned them there was tear gas ahead. They gave me an unbelieving look, and then glanced around, and realized I was right. They turned around, fairly disturbed. There should have been officers on the periphery to warn people what was going on.

Later in the night I saw some graffiti, a few things like newspaper racks thrown into the street. As always, these actions were the work of a small group. The vast majority of people I talked to throughout the day were committed to non-violence and to not vandalizing property. The radio reported three police were injured. They weren't specific about the level of injury.

There were some bright moments too: Marching to happy dance music at dusk, just before the police corralled everyone. A group that broke into a nice version of the Star Spangled Banner at the Y in front of the police. A man I didn't know who smiled and waved at me, just being friendly. All the kind people I met, and all the people I've met before who came up and said hi. The good people I walked with throughout the day.

Right or wrong, I knew I was marching with people who care, who care enough to risk being assaulted by the police, to risk arrest and injury. Some might look at that and think it's insane. I think insanity is looking at how things are these days and doing nothing. I'm open to other ideas. But for now, Occupy is the best idea around. Even when it's a mess, and things don't go right, and I'm not sure what I think, it's a great, inspiring idea.