An alleged victim is assaulted by the press 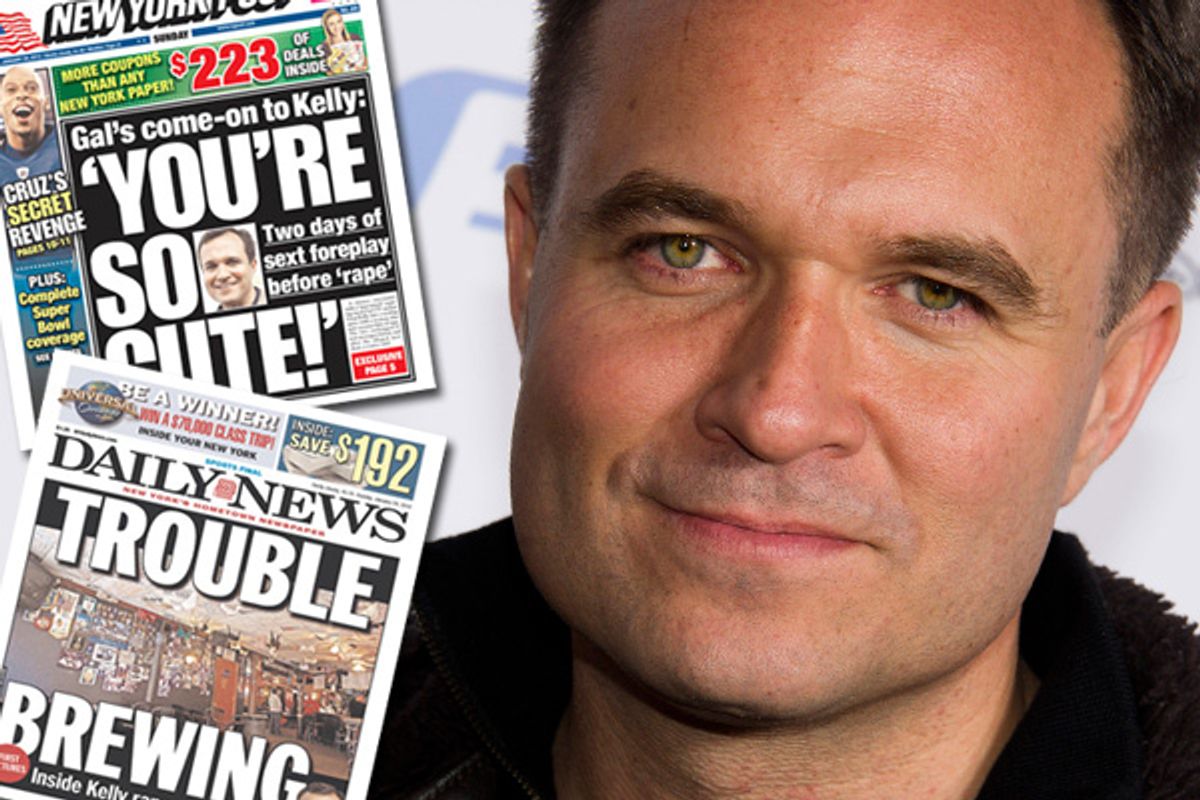 Here's what we know: On Jan. 25, an unnamed woman accused Greg Kelly, the co-host of "Good Day New York" and the son of New York police commissioner Ray Kelly, of raping her in October 2011, after they had a few drinks together in a Manhattan bar. She is described as being 30 years old and in the legal profession. We know that the woman had a boyfriend, who publicly confronted both Kellys at a recent public event. That the woman claims she had too much to drink and that Kelly forced himself on her. She says Kelly got her pregnant, that she subsequently had an abortion, and that she reportedly decided to tell her story because Kelly's father has encouraged crime victims to come forward. Kelly has not been formally charged with any crime.

Here's what we will likely never know: what really transpired in private between Greg Kelly and the woman, and the extent, if any, to which it was consensual.

And here's what the press seems to have forgotten: how you report a story like this.

For starters, you don't begin a story about an alleged crime by editorializing, based on anonymous "sources," that the accuser "was instantly enamored" of and "star-struck" by her reported attacker. You certainly don't paint a picture of "48 hours of marathon sexting" before and after the incident early in a story, then bury that the source claims it was  a grand total of 17 messages. Perhaps, as the source suggests, the texts were "sexual," but unless somebody's changed how we measure time, 17 texts in a two-day period is nobody's version of a "marathon." Yet the New York Post managed to do all of the above in a single front-page story Sunday that put "rape" in scare quotes but not "sext foreplay."

Regarding that post-incident communication, the paper's anonymous sources claim that the accuser talked to Kelly either about "doing it again," or asking him, "Why'd you do that?" So think twice before suggesting, like Rikki Kleinman blithely wrote in the Daily Beast, that "every new published detail appears to point toward consensual sex," including "sexting before and after their date."

Likewise, considering that there's no proven correlation between bar décor and sexual assault, there's no reason to breathlessly remark, as the New York Daily News does, that "Greg Kelly and rape accuser drank at East Side bar draped in bras." Yes, readers, we all know what happens when you meet up in the bra bar. That's practically a binding sexual contract! And while it's just straight-up reporting to note that the accused claims that his exchanges with the woman were "flirtatious" and that their meeting was for "a sexual purpose," you might want to throw in somewhere that flirting -- and even arranging a hook-up with another man while your boyfriend is sitting at home -- doesn't mean you can't possibly have been raped. While we're at it, journalists, go ahead and retire the antiquated, Katie Roiphe BS phrase "date rape." Here's a memo from the 21st century to you: rape is rape, even when there is a date involved.

One doesn't exactly expect responsible, unbiased journalism from the New York Post – especially regarding the police commissioner's son, who anchors the news on the local Fox affiliate, owned by the same company as the Post. But what's so dismaying about the media coverage of the Kelly story is how pathetically typical it is. There's a sexual assault accusation? Well, let's talk about the alleged victim's attractiveness, like stories did when Lara Logan was assaulted in Egypt last year. Let's talk about how she dresses, and whether she wears makeup -- even when she is a child, like the victim in a Texas gang rape. Let's note whether she was "flirtatious."

It's not that the word of a woman who says she was assaulted is automatically beyond reproach. Not at all. In September, former meteorologist Heidi Jones pleaded guilty to falsely reporting a sexual assault, admitting, "I made it up for attention." And in 2007, three Duke lacrosse team players were exonerated after being falsely accused of raping an exotic dancer at an off-campus party. When Daily News writer Denis Hamill opines that "we shouldn't rush to judgment," that Kelly, like anyone else in this country, is innocent until proven otherwise, he is correct. The burden of proof remains on the accuser, and in this situation, that proof appears to be near nonexistent. As noted prosecutor Linda A. Fairstein told the New York Times last week, "Alcohol is a horribly influential factor in these cases when it’s voluntarily ingested. When a victim tells you she can't remember what happened, it’s very hard to make a case."

Yet in the quest for fairness, it's crucial for journalists to address the persistent myths about sexual crime instead of perpetuating them. Every day, it happens to people who flirt. It happens to people who arrange dates and meet in bars and have drinks. Who are unfaithful. It happens to people who know their attackers, and, in the haze of emotions after the fact, continue to interact with them. Absolutely none of those things have squat to do with consent. And it matters when journalists conveniently assume otherwise. It tells those who've been victimized not to bother coming forward. Because if you can be a little girl gang-raped in a trailer or a reporter sexually assaulted in a throng and still somehow get blamed for it, what chance does an individual whose behavior is morally ambiguous have of ever being heard? What chance does anyone have, in a media climate that continues to insist it knows exactly what a victim looks like -- and exactly how she ought to behave?