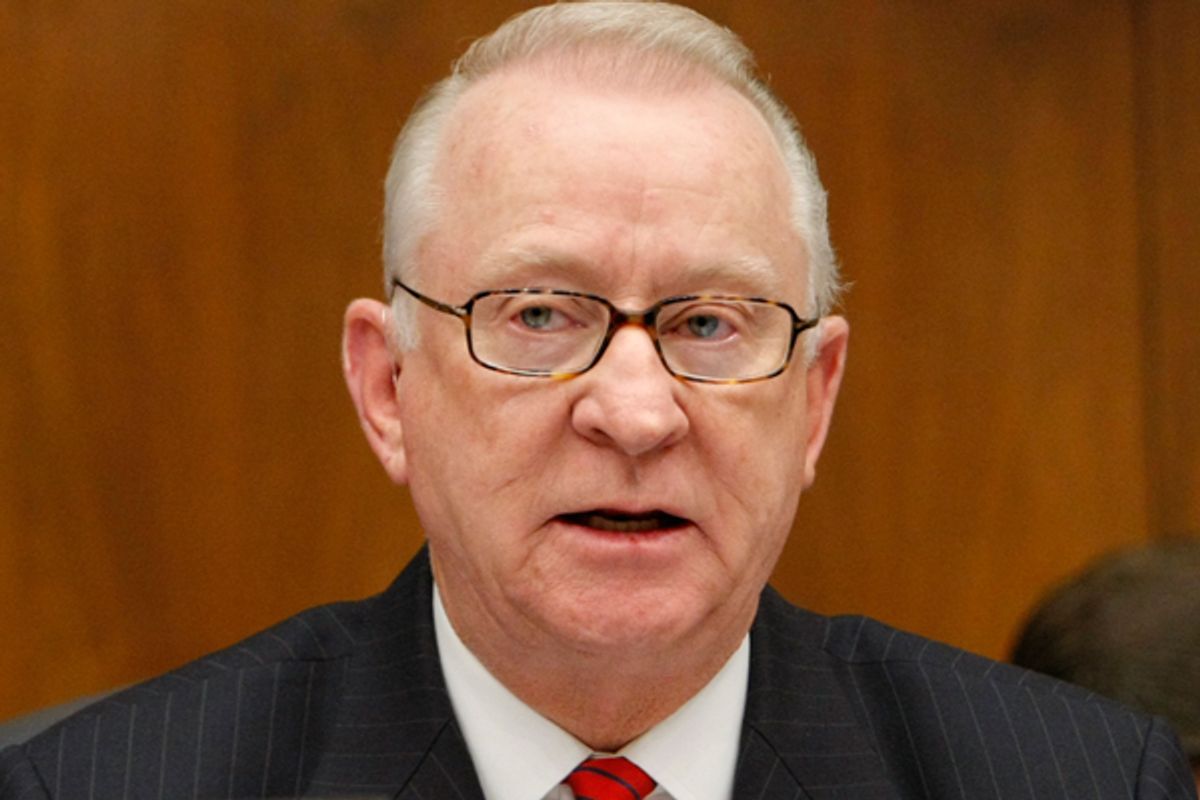 Could an effort to lift his wife's political aspirations land the powerful chairman of the House Armed Services Committee in hot water?

Recent disclosures reveal that a federal lobbyist with ties to Rep. Howard "Buck" McKeon, R-Calif., the senior member of the committee overseeing the Pentagon, provided financial support to McKeon's wife, who is seeking a seat in the California Assembly this year. As defense industry lobbyists scramble to head off looming cuts in the Pentagon budget, they are looking for new ways to ingratiate themselves with McKeon.

Patricia McKeon, Buck's wife, surprised many when she announced her intention last September to run for an open seat that largely overlaps her husband's district. One of the first reported contributions to her campaign came from a political committee called the Fund for American Opportunity, registered to a post office box in Washington, D.C., that donated $1,000. The fund, which is financed by a number of corporations including the drug industry trade association PhRMA, is owned and operated by Mark Valente, a Beltway lobbyist.

Valente's lobbying firm, Valente and Associates, reported over $1.4 million in fees last year. The firm represented at least one company, 3Leaf Group, a government contractor specializing in human resources, that sought help from Valente on issues relating to the Defense Authorization bill. McKeon, as chairman of the Armed Services Committee, was the principal author of that legislation.

Valente did not respond to a request for comment. But his so-called 527 campaign entity, the Fund for American Opportunity, gave only one contribution to a California state politician in all of 2011: Patricia McKeon.

Craig Holman, a lobbying expert with Public Citizen, says that the donation to McKeon is part of a larger pattern of influence peddling in Washington: “The objective is to throw as much money as possible at the feet of the lawmaker; that includes at the feet of his family as well.”

It's not the first time McKeon has raised eyebrows by using his elected office to boost his wife. For the last 10 years, Buck McKeon made Patricia McKeon his highest-paid campaign staffer, an arrangement that ethics experts have criticized as an invitation for corruption. In 2007, a report exposed the fact that Patricia McKeon was by far the highest-compensated family member of the few members of Congress employing relatives for their campaigns.

A review of campaign documents by Salon found that, counting reimbursements for food and travel, the McKeon campaign committee has paid Patricia over $547,584 since 2001.

----
Correction: The original version of this article stated inaccurately Patricia McKeon was "the only state candidate" to receive contributions from the 527 committee run by lobbyist Mark Valente for the period covered by the disclosure. She was the only California state politician to receive a contribution in that period. We regret this error.