"Da Vinci's Ghost": Secrets of the world's most famous drawing 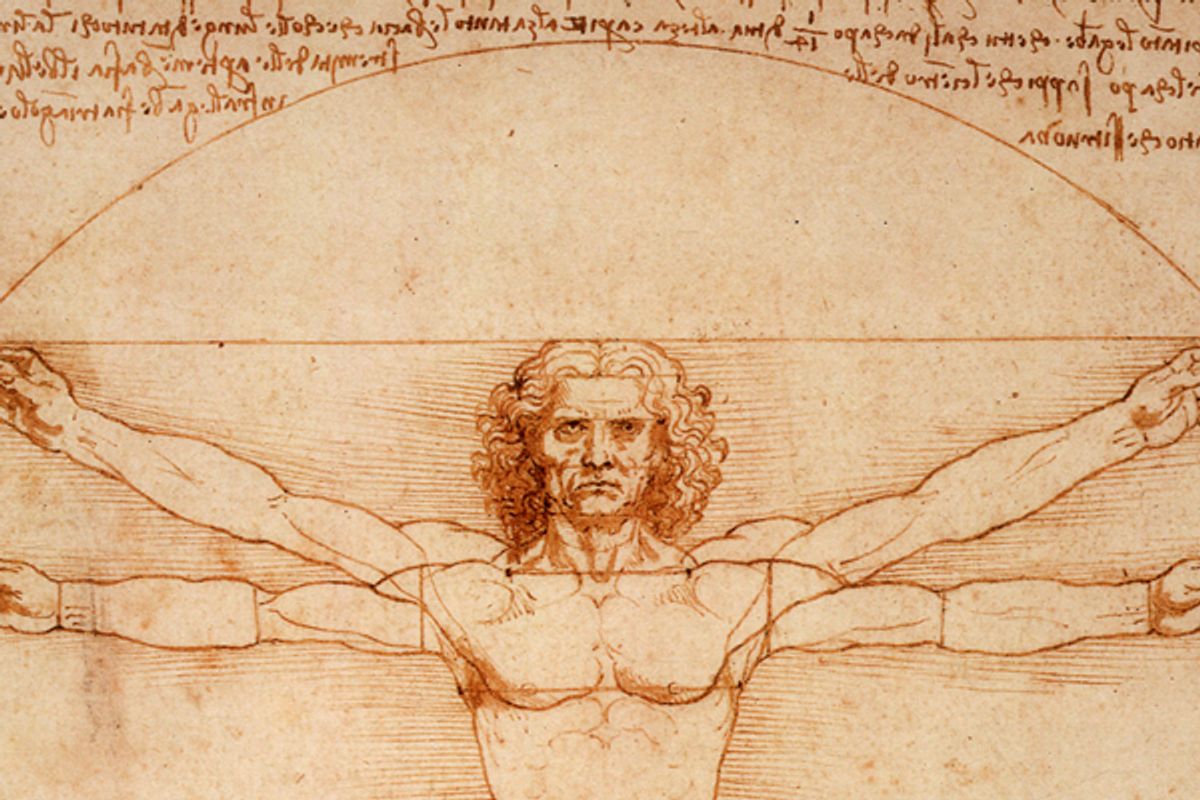 "Man," wrote Leonardo da Vinci in the 1480s, "is the model of the world," and the drawing we take to be the embodiment of that idea is called the Vitruvian Man, a name likely to be as unfamiliar to most people as the image itself is instantly recognizable. The Vitruvian Man, thought to be set down on paper by da Vinci around 1490 (before he accomplished most of his major works), is "the world's most famous drawing," according to Toby Lester's new book, "Da Vinci's Ghost: Genius, Obsession, and How Leonardo Created the World in His Own Image." The book is an account of "the rich swirl of people, texts, images and ideas that may have prompted Leonardo to draw his picture."

By Lester's own admission, "Da Vinci's Ghost" is fairly speculative. What we know of the master's inner (and external) life comes largely from his notebooks, around 30,000 manuscript pages containing many sketches and observations, but also constituting, in large part, the most impossibly ambitious to-do list of all time. Da Vinci embarked upon a comprehensive study of human anatomy (among several dozen other disciplines) in the late 1400s, and part of that project consisted of obsessive comparative measurements of various parts of the body. The text accompanying the Vitruvian Man mostly lists his findings for the "ideal" body, including such stipulations as "from the hairline to the bottom of the chin is one-tenth of the height of a man," and so on.

The transcendent meaning of the drawing is implicit (and perhaps occasionally imagined). Lester eloquently proposes the Vitruvian Man "as a study of human proportion; as an overview of the human anatomy; as an exploration of an architectural idea; as an illustration of an ancient text, updated for modern times; as a vision of empire; as a cosmography of the lesser world; as a celebration of the power of art; as a metaphysical proposition." "Da Vinci's Ghost" teases out the threads of these ideas from the centuries of Western culture that preceded the moment when Leonardo set pen to paper. The result is a short but dense book that dips into mysticism, military engineering, the reign of the Roman emperor Augustus, the theory of sacred geometry, Medieval medical education, the construction of Gothic cathedrals, and more. Although Leonardo may not have acknowledged them, according to Lester, all of these cultural forces and legacies came to bear on the creation of the Vitruvian Man.

He gets his name, by the way, from Vitruvius, a Roman engineer and the author of a text titled "Ten Books on Architecture." Vitruvius maintained that the proportions of a building should be derived from and based on the proportions of a "well-shaped" man. Such buildings in turn make up the body of an empire, in a classical version of the Medieval and Renaissance conception of universe as a multilayered reiteration of a single divine pattern. The idea that "the human body was a scaled-down version of the world and the cosmos as a whole" is, as Lester notes, "an age-old philosophical conceit," but with the Vitruvian Man it appears before us as the most beautiful and triumphant expression of the school of thought known as humanism.

Like last year's "Swerve: How the World Became Modern," by Stephen Greenblatt, "Da Vinci's Ghost" celebrates the emergence of humanism in 15th-century Italy. Both books are predisposed to the popular narrative in which the Renaissance is depicted as a revolution against Medieval thinking rather than an evolution from it, and this is regrettable, but Lester is a lot less guilty of it than Greenblatt.

Lester draws into his story such figures as the 12th-century mystic Hildegard of Bingen. Under the influence of what are now thought to be severe migraines, Hildegard saw visions, including the recurring image of a human figure in the middle of a "wheel of marvelous appearance," with its head touching the top of the circle and its feet touching the bottom. This, Lester suspects, shows the influence of Vitruvius' book (preserved in monasteries like the one Hildegard presided over), which maintained that the ideal human form, when placed in such a circle, would fit perfectly, with its navel at the center. A similar symmetry can be found by placing the same figure within a square.

For Hildegard and Medieval thinkers, the body at the center of this geometry was Christ, the intersection of the human and the divine. Leonardo's Vitruvian Man, however, is decidedly human, if magnificently so, with square and circle superimposed. "The figure," Lester writes, "captures a hinge moment in the history of ideas: the intoxicating, ephemeral moment when art, science and philosophy all seemed to be merging, and when it seemed possible that, with their help, the individual human mind might actually be able to comprehend and depict the nature of ... everything."

Leonardo, that consummate polymath, has become yet another symbol of this humanist aspiration, while illustrating, at times, its downside: "He set himself to learn many things," wrote Georgio Vasari, his 16th-century biographer, "only to abandon them almost immediately." (Still, for all his frustrations, he did pretty well for himself in the end.) We can't know what the master was thinking when he drew the Vitruvian Man, but Lester, who is forced by the thinness of the historical record to guess at many things, seems least speculative of all when he looks into the Man's intensely concentrated features and sees a resemblance to his creator. Reaching for the edges of the cosmos, seeming to fly and stand firmly planted on the ground at the same time, he's a creature whose limitations are their own form of glory.