Lessons from Iraqi outrage over US drones

Why are the Iraqi people so hostile to and skeptical of their liberators? 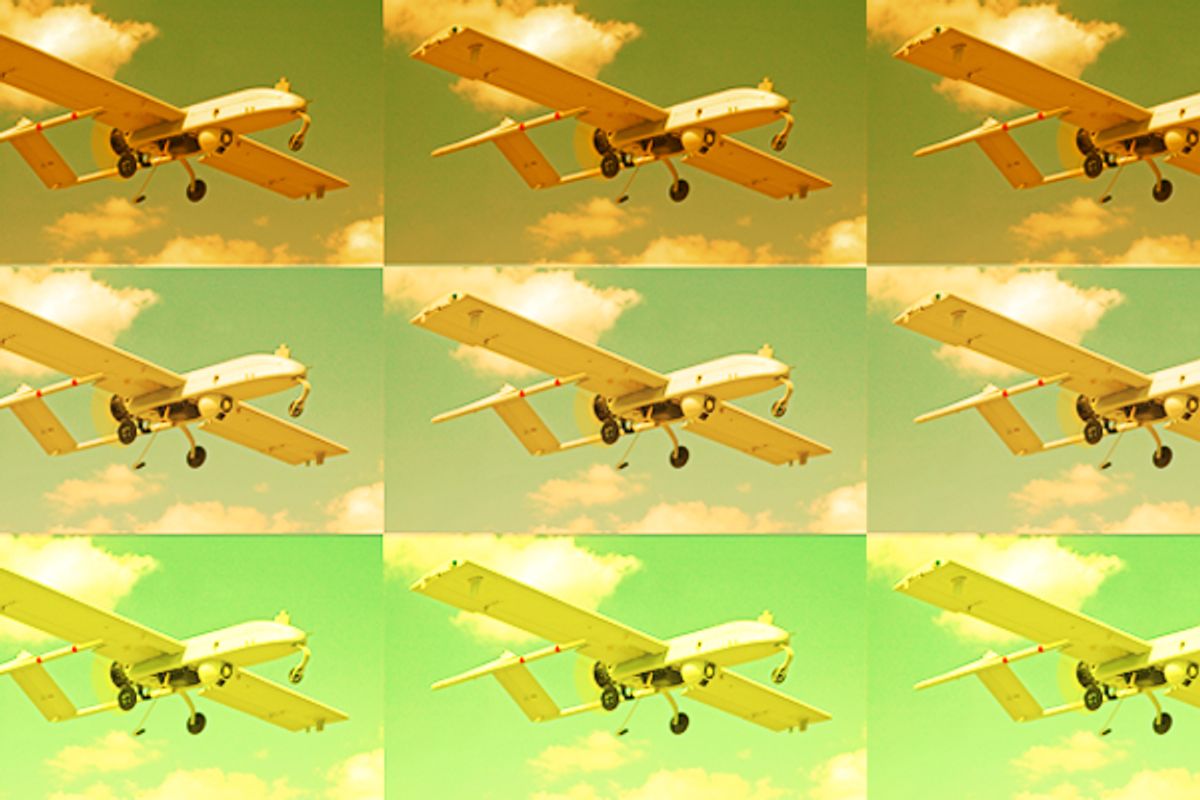 The U.S. is continuing to fly surveillance drone aircraft over Iraq, prompting what The New York Times this morning describes as "outrage" among senior Iraqi officials and the Iraqi public. There are several revealing points from this account, beginning with this description of the ongoing American presence in that country now that "the war is over":

The drones are the latest example of the State Department’s efforts to take over functions in Iraq that the military used to perform. Some 5,000 private security contractors now protect the embassy’s 11,000-person staff, for example, and typically drive around in heavily armored military vehicles.

When embassy personnel move throughout the country, small helicopters buzz over the convoys to provide support in case of an attack. Often, two contractors armed with machine guns are tethered to the outside of the helicopters.

So militarized is U.S. foreign policy -- and so reviled is the U.S. in Iraq -- that even when it "withdraws" from that country, it maintains a presence that is so large and menacing as to be unimaginable in most other countries around the world: basically the equivalent of a small army. Then we have this, about the state of Iraqi domestic politics vis-a-vis the United States:

The United States, which will soon begin taking bids to manage drone operations in Iraq over the next five years, needs formal approval from the Iraqi government to use such aircraft here, Iraqi officials said. Such approval may be untenable given the political tensions between the two countries. Now that the troops are gone, Iraqi politicians often denounce the United States in an effort to rally support from their followers.

The noble geniuses who planned and publicly crusaded for the war in Iraq insisted that "liberation" would mean a grateful citizenry and a stalwart ally in the middle of the region. Instead, anti-American animus is so high that Iraqi politicians routinely rail against the U.S. as a means of bolstering their own standing -- condemning The Liberators is a staple of Iraqi politics -- and the Iraqi government is all but barred from being seen as too close with, or accommodating of, the U.S. (that's why, in the wake of WikiLeaks cables reminding Iraqis of particularly gruesome incidents of U.S. forces slaughtering civilians and then lying about it, the Malaki government was unable to agree to the legal immunity for U.S. forces which Obama officials were demanding as a condition for troops to remain in Iraq). Then we have this, regarding one reason Iraqi animosity toward the U.S. is so high:

Many Iraqis remain deeply skeptical of the United States, feelings that were reinforced last week when the Marine who was the so-called ringleader of the 2005 massacre of 24 Iraqis in the village of Haditha avoided prison time and was sentenced to a reduction in rank.

“If they are afraid about their diplomats being attacked in Iraq, then they can take them out of the country,” said Mohammed Ghaleb Nasser, 57, an engineer from the northern city of Mosul.

These same Iraqis watched Blackwater contractors who mowed down 17 Iraqi civilians go free, and then watched Blackwater being awarded all sorts of lucrative contracts -- still -- by the U.S. Government. If you were a rational Iraqi, what message would that send to you about how much the U.S. values the lives of your country's citizens? And then there's this explanation offered as to why Iraqis are so distrustful of U.S. drones even when, as is true for surveillance drones, they are ostensibly unarmed:

Hisham Mohammed Salah, 37, an Internet cafe owner in Mosul, said he did not differentiate between surveillance drones and the ones that fire missiles. “We hear from time to time that drone aircraft have killed half a village in Pakistan and Afghanistan under the pretext of pursuing terrorists,” Mr. Salah said. “Our fear is that will happen in Iraq under a different pretext.”

When the face you constantly show to the world is one of extinguishing the lives of civilians from the air -- which is exactly what the U.S. has been doing for a full decade in multiple Muslim countries -- then it shouldn't come as a surprise that this is how people in that region react (just imagine what an attack on Iran, either with direct U.S. involvement or support for an Israeli attack, would generate in this regard). One of the favorite tropes of the American media is how propagandized and misled Arabs are in that part of the world, yet here we find yet again that well-informed, justified skepticism is prevalent over there -- "drone aircraft have killed half a village in Pakistan and Afghanistan under the pretext of pursuing terrorists" and “our fear is that will happen in Iraq under a different pretext" --  in exactly the ways that an uninformed American citizenry most lacks and most needs.