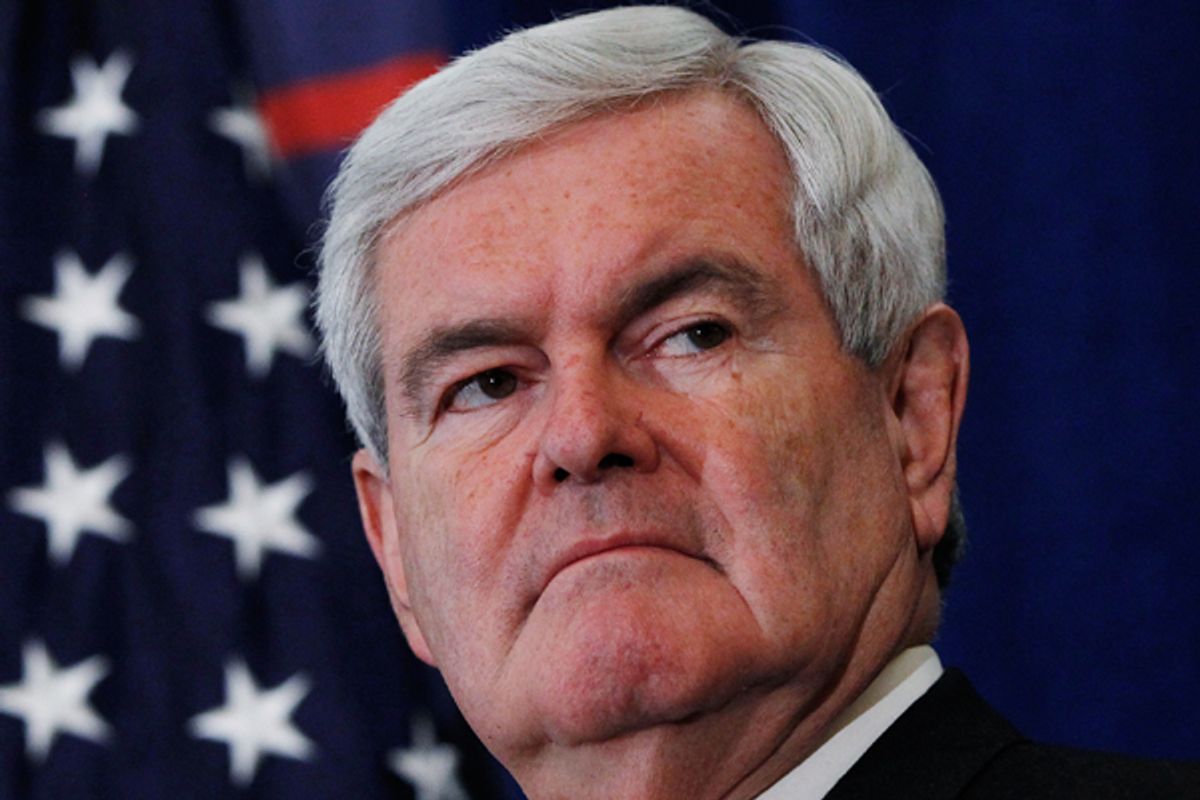 The obvious reason for Newt Gingrich to press on even if he suffers the lopsided Florida defeat tomorrow that everyone now expects is that the overwhelming majority of convention delegates have yet to be awarded. So why not hang in there for a while and see what happens? But the problem is that what's happened in Florida, where a clear Gingrich lead has turned into a double-digit deficit in a week's time, is likely to keep happening as long as he stays in the race and is seen as a viable candidate.

The former House speaker certainly has played a role in his own Sunshine State undoing, but the biggest factor has been the bombardment of attacks from Romney, the pro-Romney super PAC, and influential Republican voices. That last component, as Jonathan Bernstein pointed out this morning, is key. The national GOP's opinion-shaping class has, with few exceptions, spent the past week either echoing Romney's attacks or staying silent; almost no one has rallied to Gingrich's defense. This speaks to how profoundly resistant most "elite" Republican are to the idea of nominating Gingrich -- and how dedicated they are to marginalizing him whenever he rises to contender status. (After all, they went after him the same way when he surged to the lead in December.)

For Gingrich, this seems like  recipe for futility going forward. Romney and his super PAC buddies aren't going to run out of money, so they can keep outspending him by obscene margins in subsequent primary battlegrounds. And elite resistance to Gingrich, which was born sometime in the late 1990s, isn't about to go away either. And yet, Gingrich is vowing to take his campaign all the way to the national convention this summer. What does he see -- or think he sees -- that could turn the race around? Here are six possible explanations for his defiant bluster:

1. The casino guy's cash: 78-year-old Sheldon Adelson (and his wife) have poured $10 million into a pro-Gingrich super PAC so far, and nearly $20 million into his political operation since 2006. Crucially, the Adelsons' most recent financial support all came after Gingrich's December slide and his miserable finish in Iowa, and it played no small role in his ability to sneak back into contention in South Carolina (where Romney and party elites, thinking their work was already done, initially left Gingrich alone). Most of the upcoming GOP contests will be in states that aren't nearly as large and expensive as Florida, so if the Adlesons re-up, Gingrich could be more financially competitive with Romney.

But will they re-up? Clearly, there is a solid personal relationship between Sheldon Adelson and Gingrich. But the casino magnate has made it clear that his animating issue is Israel. In that sense, it was hard not to see Romney's blunt, unsympathetic response to a Palestinian-American debate questioner last week as at least partly a message meant for Adelson: I'm on your side too -- you don't need to fight me all the way to Tampa.

2. The Old Confederacy: Much has been written about Romney's struggle to open a clear, stable lead in the national GOP horse race. Less has been said about a key reason for that struggle: the South. The former Massachusetts governor's poll numbers have been worse in Dixie than anywhere else in the country. And while there hasn't been extensive polling in individual Southern states, there were signs late last year that Gingrich, a nominal Southerner who represented Georgia in the House for 20 years, enjoyed unusual strength in the region. In early and mid-March, Georgia, Tennessee, Mississippi, Alabama and Louisiana will all vote; Gingrich may see in these states an opportunity to recapture his South Carolina magic. (Virginia, which votes March 6, would also seem a natural Gingrich target -- if he'd qualified for its ballot.)

3. Pure spite: Gingrich has made his personal offense at Romney's attacks quite clear, surely enjoyed evening the score in South Carolina, and probably hates the idea of getting out of Romney's way and allowing him to claim an early victory. At 68, it's not like Gingrich has to worry about damaging himself for a future campaign, so maybe his thinking boils down to: I'm going to make this as miserable for Romney as possible for as long as possible, even if I don't have a prayer. We've seen something like this before: It helped explain why Jerry Brown battled all the way to the Democratic convention in 1992 even though his race with Bill Clinton was effectively settled by the April 7 New York primary.

4. Selling books: Remember when it was conventional wisdom that Gingrich was only running for president to sell books and videos and to build his own brand? I'm still not convinced that wasn't at least partly his reason for getting in the race -- or at least for sticking with it when his candidacy seemed to melt down last spring and summer. By this theory, Gingrich's campaign eventually became the political equivalent of "Springtime for Hitler," succeeding spectacularly in spite of its design. So if he does fall hopelessly behind Romney, what's to say Gingrich won't simply return to his roots and ride out the spring and summer months as an official candidate, milking that status for all the free publicity it's worth? Of course, Romney will stop agreeing to debates if he pulls far ahead, devaluing a fake candidacy exercise for Gingrich.

5. He really is smarter than us: At this point, maybe Gingrich deserves some credit for his persistence. He pressed ahead last summer when the entire political world was writing him off and ridiculing him -- and by December, he was leading by double-digits in national polls. Then, party elites panicked and cut him down to size and Gingrich was again written off -- only to return from the dead and win the South Carolina primary by 13 points. However this campaign ends, Gingrich will have enjoyed far more success than he ever would have if he'd folded his tent when everyone was telling him he was going nowhere. So, sure, it looks like Romney and the GOP establishment have figured out how to stop him, and the longer he stays in the race, the more abuse Gingrich figures to endure. But you can't exactly blame him if he thinks, for whatever reason, that he's got one more improbable surge in him. (And maybe he does.)

6. He's bluffing: It's hardly a revelation, but it's worth mentioning that candidates who forcefully proclaim their absolute commitment to stay in a race frequently end up changing their minds.