The Florida primary shows why it's time end the farce of "independent" expenditures. 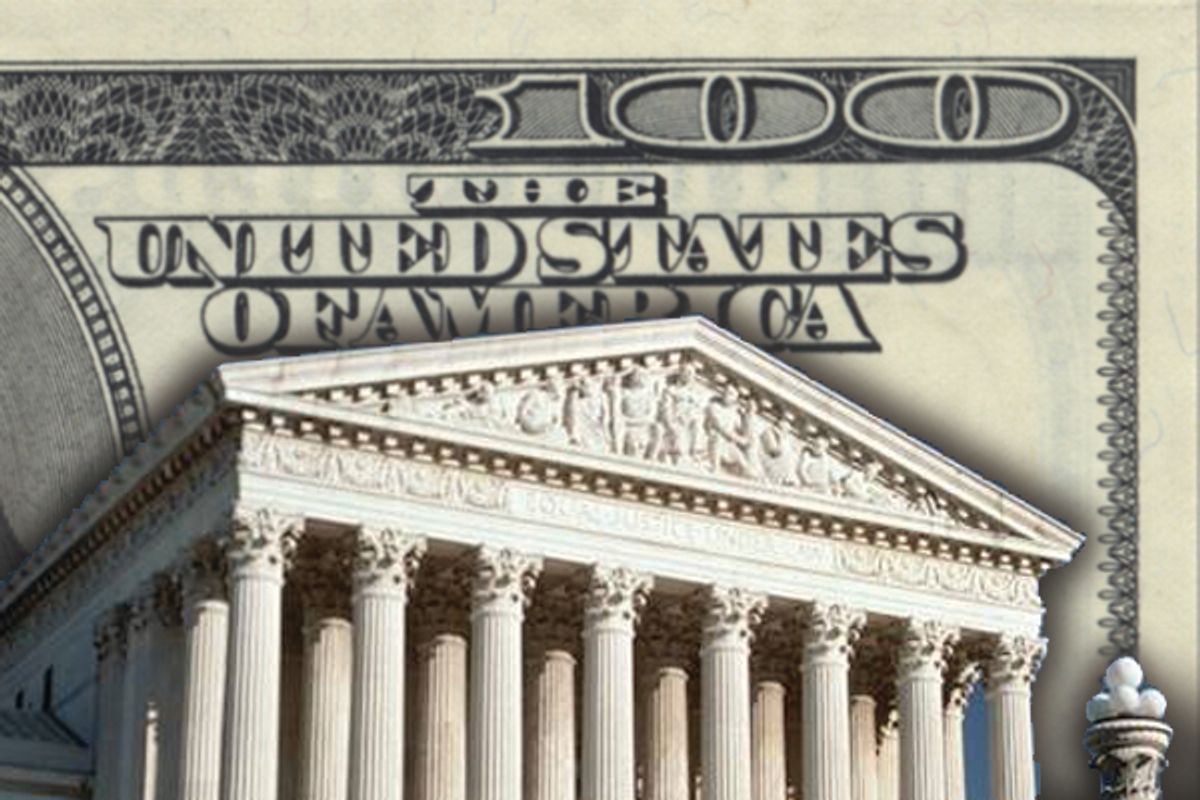 Super PACS: Brought to you by the Supreme Court (AP/Salon)
--

Election junkies circled January 31st on their calendars months ago — but not because of Florida’s primary today, no matter how important it is to Mitt Romney and Newt Gingrich.

Candidate-specific Super PACS — which can take unlimited sums from individuals and corporations, and likewise spend without limits — are like nothing seen in any previous election.  They’ve eviscerated the post-Watergate contribution limits that Congress enacted to curb corruption, and they’ve hit the presidential campaign with the force of a freight train.

In Iowa, when Newt Gingrich became the latest Not-Romney to top the polls, it wasn’t Romney himself who led the counterattack.  Instead, it was a Romney-backing Super PAC, Restore Our Future, that bloodied Gingrich with a $4 million barrage of attack ads.  Romney reaped the benefit of the Super PAC’s scorched earth TV campaign, watching Gingrich stumble to a distant fourth-place finish.

Romney got a taste of his own medicine in South Carolina where, thanks to $10 million from casino mogul Sheldon Adelson and his wife, the pro-Gingrich Winning Our Future flooded the airwaves with a ferocious portrayal of Romney as a predatory capitalist.  Just as in Iowa, the attacks worked.

Now the Super PACs have turned to Florida.  Romney and his Super PAC blanketed the Sunshine State with more than $15 million of TV ads, outspending Team Gingrich five to one.

Super PACs are able to raise and spend these eye-popping totals because they’ve been given a free pass around the contribution limits that apply to candidates.

The Supreme Court paved the way.  Countless pundits blame the Court’s decision two years ago in Citizens United v. FEC, but the full story is a bit more complicated.  It ultimately leads to Buckley v. Valeo, a case decided 36 years ago Monday.

Crucially, the Court’s decisions striking expenditure limits apply only to spending that is independent of candidates in reality, and not in name only.  Under Buckley, to avoid limits, expenditures had to be “made totally independently of the candidate and his campaign.”  In 2001, the Court reiterated that only expenditures made “without any candidate’s approval (or wink or nod)” are exempted from reasonable regulation.  Citizens United, too, struck limits on independent corporate spending only because it was “[b]y definition . . . not coordinated with a candidate.”

Super PACs make a mockery of the idea of independence. As Elizabeth Drew wrote recently in the New York Review of Books, today, the “connections between . . . candidates and the Super PACs supporting them aren’t very well hidden.”

Comedians Stephen Colbert and Jon Stewart have had a field-day lampooning the absurdity of “coordinating without coordination.”  And it hasn’t been hard:  No one but a hair-splitting campaign finance lawyer could argue with a straight fact that the presidential Super PACs are “independent” of — and don’t coordinate with — the campaigns.

The candidate Super PACs were all established by former campaign advisors to the candidates.  They are funded by friends and associates with close ties to the candidates (or, in the case of former candidate Jon Huntsman, by the candidate’s father).  As election law expert Rick Hasen explained, Super PACs can do a lot that sure sounds like coordination, including soliciting funds, attending fundraisers, appearing in ads, and using the same lawyers — all without coordinating, and still legally claiming to be independent.

Mitt Romney — who has held private meetings with Restore our Future donors and appeared at one of the group’s fundraisers — basically conceded that group isn’t independent of his campaign, saying: “It’s not that I don’t support super PACs.  We raise money for super PACs.  We encourage super PACs.  Each candidate has done that.”  Newt Gingrich recently said that he’d “promised” his benefactor that he would defend "the United States and its allies," for the millions of dollars the Adelsons gave Winning Our Future, a reassuring proposition for the vehemently pro-Israel Adelson. If Gingrich were elected president, how many other favors would $10 million buy?

We’ll see on January 31st what other deep-pocketed donors are currying favor with the candidates by donating to their Super PACs.  That is, unless the donors choose to route their contributions through the shadowy non-profit groups (501[c]4’s) that have sprung up alongside the Super PACs, and that don’t have to disclose donors’ names.  These groups let donors do their spending outside the public eye — even while they make sure the candidates know exactly who they are.

With the huge amounts of cash being funneled with a wink and a nod to groups that claim to be independent, scandal and corruption on the scale of Watergate is virtually certain.  Erstwhile campaign reformer John McCain stated the obvious when he predicted that “there will be a major scandal associated with” the Super PACs he described as “disgraceful.”

There are countless ways the existing system of campaign finance should be reformed, but cleaning up Super PACs is an obvious first step.  Congress should adopt common-sense rules that make terms like independence and coordination mean something.  Super PACs that function as adjunct campaigns should be treated like what they are — and they should be subject to the same contribution limits as candidates.  Putting candidates in charge of their own campaigns is the first step toward putting the public back in charge of democracy.