Is the Chicago mayor protecting his city? Or his former boss? 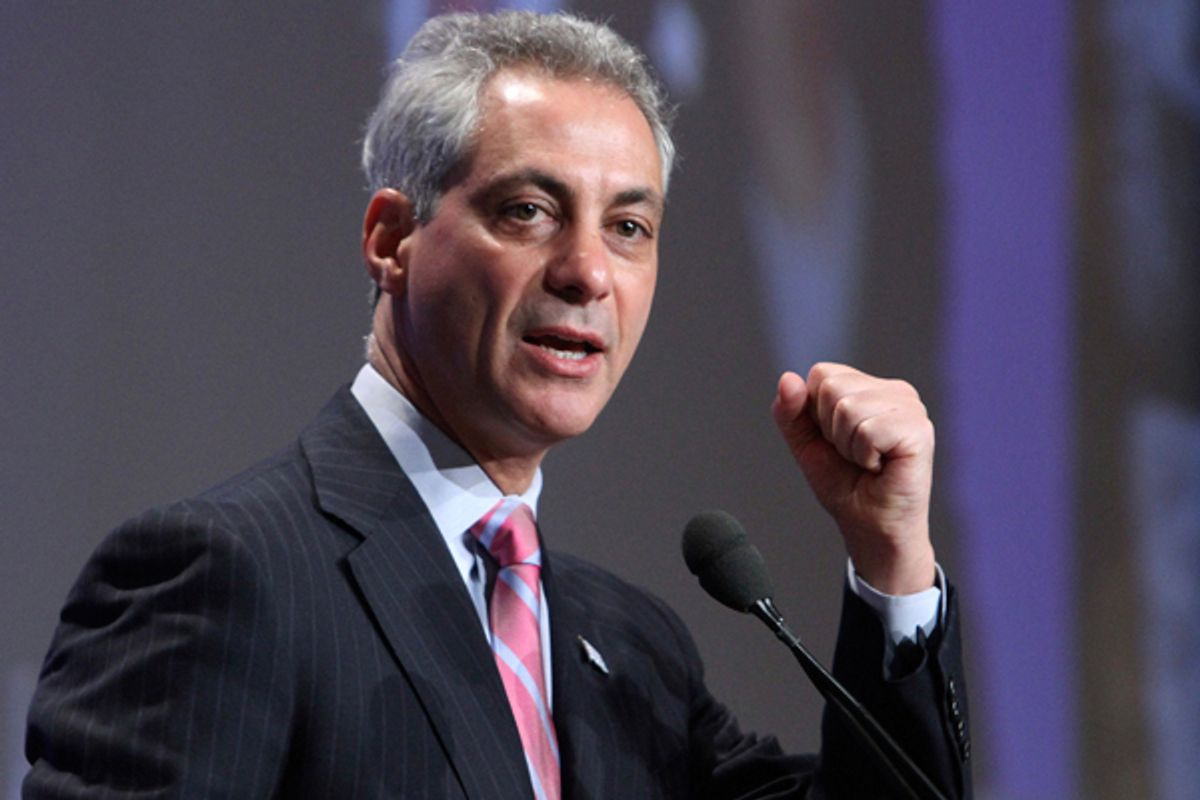 The stage is set for dramatic street scenes in Chicago this May during the G-8 and NATO summits. The actors are ready: Mass actions in Oakland, Calif., on Saturday, followed by solidarity marches across the country Sunday indicate that Occupy is far from stagnating. Occupy Chicago has called for a "Chicago Spring" to coordinate protest groups and actions during the summit, while Adbusters, the Vancouver-based culture jamming magazine, last week implored 50,000 people to descend on Chicago in May. Seasoned summit-hoppers from around the world have had their planners marked for months.

Then there's the backdrop: Chicago, the site of the notorious 1968 Democratic National Convention and police riot. The city of Barack Obama's election night rally in 2008 -- when a politician could still pull off a slogan like "hope" and it didn't seem to everyone like a cruel joke. And, as of this month, a Chicago where protest rules and punishments for dissent are stricter than ever, thanks to ordinances recently passed through the city council.

"The ordinances, combined with Chicago's history of spying on political activists, do not bode well for how the City will treat protesters at the upcoming G-8/NATO summits," Heidi Boghosian, director of the National Lawyers Guild, told Salon.

The new rules, introduced by Chicago Mayor Rahm Emanuel and passed by the city council, include an increased number of surveillance cameras across the city; the ability for Chicago's police chief to deputize trained out-of-state law enforcement personnel; increases in parade permit fees and heavier fines for violating parade rules; keeping public parks closed longer than usual each day; the requirement that "large parades" (almost every sizable street protest) take out $1 million liability insurance to get permits and for organizers to “agree to reimburse the city for any damage to the public way or to city property arising out of or caused by the parade.”

"When municipalities require that liability insurance be taken out by protesters before permits are granted, authorities are making it costly and burdensome for political groups to secure permits. Changing the requirements for obtaining protest permits is just one of many tactics that the Guild has seen used across the country in advance of large-scale demonstrations, all of which amount to an improper infringement on the right to assemble and engage in First Amendment-protected activities," said Boghosian.

The insurance requirements and other parade restrictions give little incentive for organizers to apply for permits at all. In the well-founded understanding that mayhem will ensue and that many people heading for Chicago care little for permitted modes of dissent anyway, the city ordinances seem to disincentivize groups from taking on the burden of a permit, while not at all discouraging people intent on taking the streets from doing so.

Former Seattle police chief Norman Stamper, who oversaw the policing of the Battle of Seattle in 1999 and knows all too well the effect of repressive crackdowns on dissent, is skeptical about Chicago's new rules to restrict marches, which include a requirement that protesters provide the city with a list of all signs, banners and sound equipment. "It could well backfire, its provisions provoking additional protest, and raising questions about how they would be enforced," said Stamper.

Mayor Emanuel, in the face of immense opposition from protest groups and aldermen, conceded to drop an initial proposal to also increase fines for resisting arrest. Nonetheless, a press release from Occupy Chicago called the remaining ordinances’ passage through city council “a significant attack on democratic rights.”

"The mayor of Chicago has a clear choice," said Bernadine Dorhn, former member of the Weather Underground and associate professor of law at Northwestern University, who spoke out against Chicago police actions at the 1968 DNC. "He can represent Chicago as an Open City: open the parks and public spaces, and welcome debate, dissent and arts ... Or he can shut down speech and assembly, and prepare for the apocalypse: arm and prepare police for violence and confrontation, close the parks, schools and public places, and barricade the warmakers of NATO and G-8 as they meet for the new military/economic order."

It seems Emanuel made his choice  and opted for preemptive crackdown, further setting the tone for tense scenes come May. When President Obama announced that Chicago would be the first U.S. city outside of Washington, D.C., to host a NATO summit, many residents expressed concern. University of Chicago economist Allen Sanderson told CBS Chicago that the summit could be a "potential disaster," noting that the timing will see Occupy supporters "out of hibernation."

The decision to stick with Chicago for the summit and amp up protest controls shows a president willing to co-opt and clamp down on dissent for his own purposes. As Sanderson warns, however, Obama and Emanuel might come to regret their choices. Occupy Chicago have already answered the new ordinances defiantly, announcing, "Mayor Emanuel, you’ll see us in the streets of Chicago: our streets."