Government support of industry is the American tradition 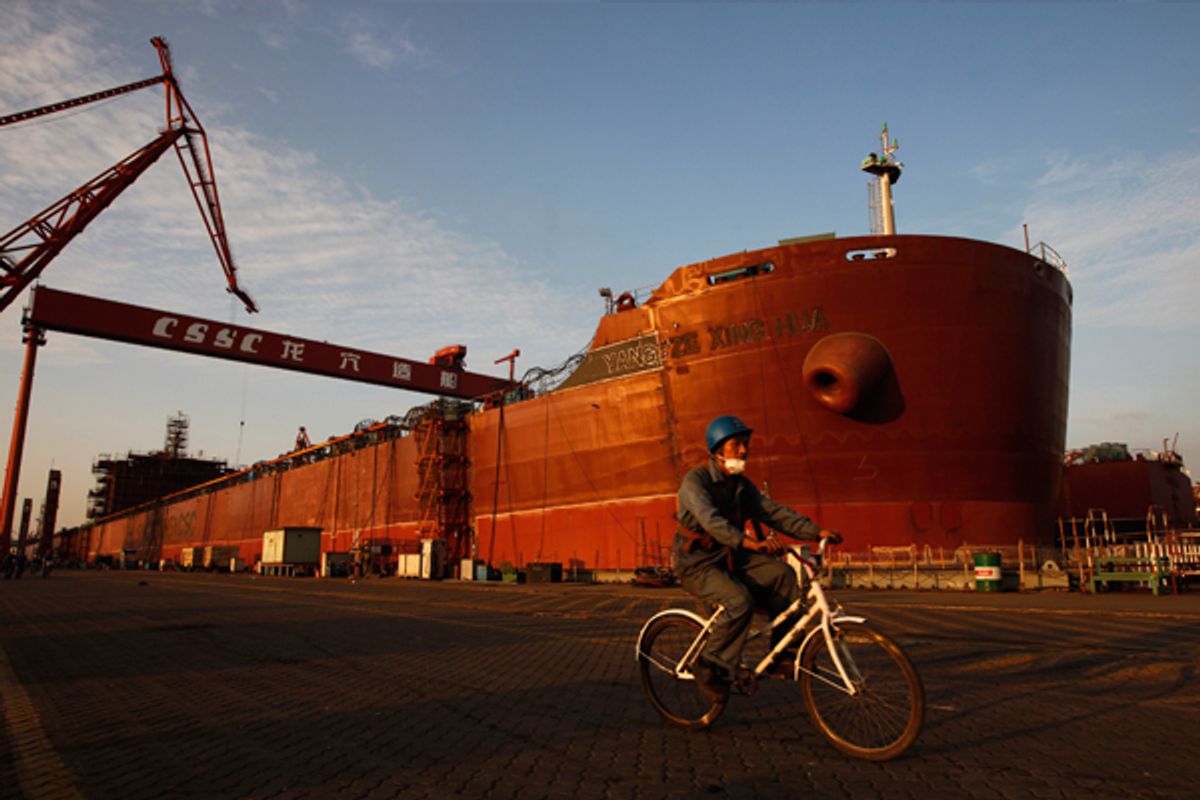 President Obama’s emphasis in his State of the Union message on revitalizing American manufacturing has led to predictable attacks by critics that he is practicing “industrial policy.”  This criticism is largely limited to the libertarian right, which has watched in dismay as Mitt Romney denounces unfair Chinese practices and Newt Gingrich promises to revive the government-backed American space-flight industry.

In debates in the 1980s and 1990s, the term was often associated with proposals to emulate one or another aspect of the export-oriented Japanese model. Today, however, critics use “industrial policy” in blanket condemnations of any government support of particular technologies as well as particular industries and particular companies.  Industrial policy, they allege, is both un-American and doomed to failure.

In fact industrial policy is as American as domestically produced apple pie.  George Washington supported Alexander Hamilton’s plan for promoting American manufacturing by means of subsidies and tariffs, and Hamilton’s opponents Thomas Jefferson and James Madison eventually reconciled themselves to federal support for American manufacturing.  Henry Clay proposed a similar “American system” of infant-industry protection and federal support for infrastructure.  During the Civil War, Clay’s disciple Abraham Lincoln presided over the enactment of a version of the American System, based on high tariffs to protect strategic industries and federal land grants and financial subsidies for transcontinental railroads.

Industrial policy was even more successful in the 20th century U.S.  After the Wright brothers invented the airplane, the federal government used airmail to subsidize the infant American civil aviation industry.  The U.S. Navy worked with American companies to create the Radio Corporation of America (RCA), which spun off the NBC and ABC radio and TV networks.  During World War II the government built vast numbers of factories, which were turned over at low prices to private companies after 1945.

The most innovative entrepreneur in the 20th century was the U.S. government.  The federal government invented or developed nuclear energy, computers, the Internet and the jet engine.  And it built the interstate highway system and completed the national electric grid, creating a continental market based on the technologies of the second industrial revolution.

To be sure, the government has sometimes backed failures, usually in the fad-driven energy field, like Solyndra or synfuels back during the Carter years.  But few private venture capitalists can match the remarkable record of success of Uncle Sam.  Indeed, venture capitalists in IT and social networking have exploited and commercialized technologies from the transistor to the Internet that were originally developed by America’s home-grown version of state capitalism.

Even a seemingly commonsensical rule like preventing the government from “picking winners” among particular corporations is unconvincing, in light of the historical record.  Congress gave Samuel F.B. Morse the money he needed to develop his telegraph.  Was that wrong?

It would be easy to get a thousand Ph.D. economists to sign a manifesto insisting that we should ignore history whenever it conflicts with theory. But those who know only about generic firms competing in abstract markets know nothing useful at all.  Nobody can understand real-world industrial capitalism without understanding the nature and history of the specific major industries that rival countries struggle to obtain, by fair means or foul.

Shipbuilding, for example. In the 17th century, in order to surpass the Dutch as the leading trading and naval power, the English passed the Navigation Acts, which mandated that all goods brought in and out of the island kingdom had to be borne in English ships with English crews. The modern equivalent would be a requirement that nobody could fly in or out of the U.S. except on an American airliner made in America by Boeing.

The Navigation Acts ensured that Britain would have an immense, state-of-the-art merchant marine (civilian) fleet with experienced sailors, so that both ships and men could be drafted in wartime.  For this reason, Adam Smith wrote in "The Wealth of Nations":  “As defence, however, is of much more importance than opulence, the act of navigation is, perhaps, the wisest of all commercial regulations of England.” Elsewhere in the book Smith explained:  “The defence of Great Britain depends very much upon the number of its sailors and shipping.  The act of navigation, therefore, very properly endeavors to give the sailors and shipping of Great Britain the monopoly of the trade of their own country.”

When the United States won its independence from Britain, it followed the  example of the mother country and passed its own navigation laws.  While foreign ships were permitted to carry goods to and from U.S. ports, all “cabotage” — port-to-port shipping along the coasts or up and down rivers — was a monopoly of ships that had 75 percent American ownership and majority-American crews.  Until World War I, America’s merchant marine fleet was protected under the 1817 Act Concerning the Navigation of the United States.  This policy was reaffirmed by the 1920 Jones Act, which remains in place today.

The Jones Act and its predecessors, however, did nothing to help builders of ocean-going commercial ships.  During World War I, the federal government paid for a massive expansion of American shipbuilding.  But the war left a global glut and American shipbuilding contracted again.

President Franklin Roosevelt had served as assistant secretary of the Navy in Woodrow Wilson’s administration.  Under his leadership, Congress in 1936 passed the Merchant Marine Act and created the U.S. Maritime Commission to promote “an adequate and well-balanced American merchant marine, to promote the commerce of the United States, and to aid in the national defense.”

In World War II, as in the earlier global conflict, defense dollars paid for the expansion of American shipyards.  When overcapacity plagued the global industry after the war, the major shipbuilding nations responded by subsidizing their shipbuilders to preserve them and compete for shares of the global market.  The U.S. responded in kind, providing American shipbuilders with operating differential subsidies to compensate for foreign government subsidies and lower wages overseas.

Then Ronald Reagan was elected president.  In 1981 the market fundamentalists of the Reagan administration brought about the merger of the U.S. Maritime Commission with the U.S. Department of Transportation, not with the Pentagon, where according to Adam Smith’s logic it belonged.  The administration and Congress abolished all subsidies to American shipbuilders, leaving them unable to compete for global business against foreign rivals that benefited from government subsidies, government financing of sales, government R&D, government grants and tax benefits. The Reagan administration claimed that the planned 600-ship navy would compensate for the loss of commercial business by American shipyards, but that navy never materialized, and following the Cold War the U.S. Navy shrank.  A five-point national shipbuilding initiative by the Clinton administration, designed for military-to-commercial conversion, was too little and too late.

Shipbuilding is a highly capital-intensive, advanced technological industry, not an “old,” labor-intensive industry that is naturally suited to poor, developing nations with unskilled labor.  In addition to high-wage Japan and South Korea, leading shipbuilding nations include Germany, France, Finland, Italy, Poland and Spain, which unlike the U.S. have never ceased to protect and subsidize this critical strategic industry.  Unions cannot be blamed for the demise of American shipbuilding, because many successful shipbuilding work forces abroad are unionized.

In Reagan’s first year in office, 46 merchant ships were on order from American shipbuilders.  During his final year in office, the number was zero.  After Reagan, American shipyards that built civilian seagoing vessels collapsed from nearly two dozen to around half a dozen, which depended on dwindling Navy contracts and the Jones Act for most of their shrinking business.

In 1975, Japan, South Korea and China had 8 percent of world shipbuilding.  By 2010 the three East Asian nations had 86 percent of global shipbuilding. Even though U.S. exports and imports account for a fifth of all seaborne trade, the U.S. builds fewer than 1 percent of the commercial ships in the world.  No clearer proof exists that nations can use industrial policies to start from practically nothing and soon dominate a major global industry.  Having learned that lesson, India and Brazil have announced plans to promote their national shipbuilding industries, using methods like procurement from state-owned energy companies and national content laws. Meanwhile, the U.S. has no plans to rebuild the once-great American shipbuilding industry that Franklin Roosevelt expanded and Ronald Reagan allowed to collapse.

Government policy, not absolute or comparative advantage, explains why the U.S. and the European Union dominate the global aircraft construction industry, why Japan captured much of the global consumer electronics market, and why China has rapidly become a manufacturing power.  None of this means that the U.S. should go back to high 19th-century-style tariffs or emulate East Asian countries in suppressing wages and consumption to overinvest in manufacturing.  Nor does it justify corrupt crony capitalism that tries to clothe itself in the rhetoric of the national interest.  But it does mean that today, as in the past, a national industrial policy of some kind is as essential as the armed forces to American security and prosperity.

One way or another, America will have an industrial policy.  The only question is whether it will be made by us -- or made for us, by foreign governments in the service of interests other than our own.