“I’m not concerned about the very poor”

Just hours after his Florida triumph, Romney shows the world how not to follow up a huge primary victory 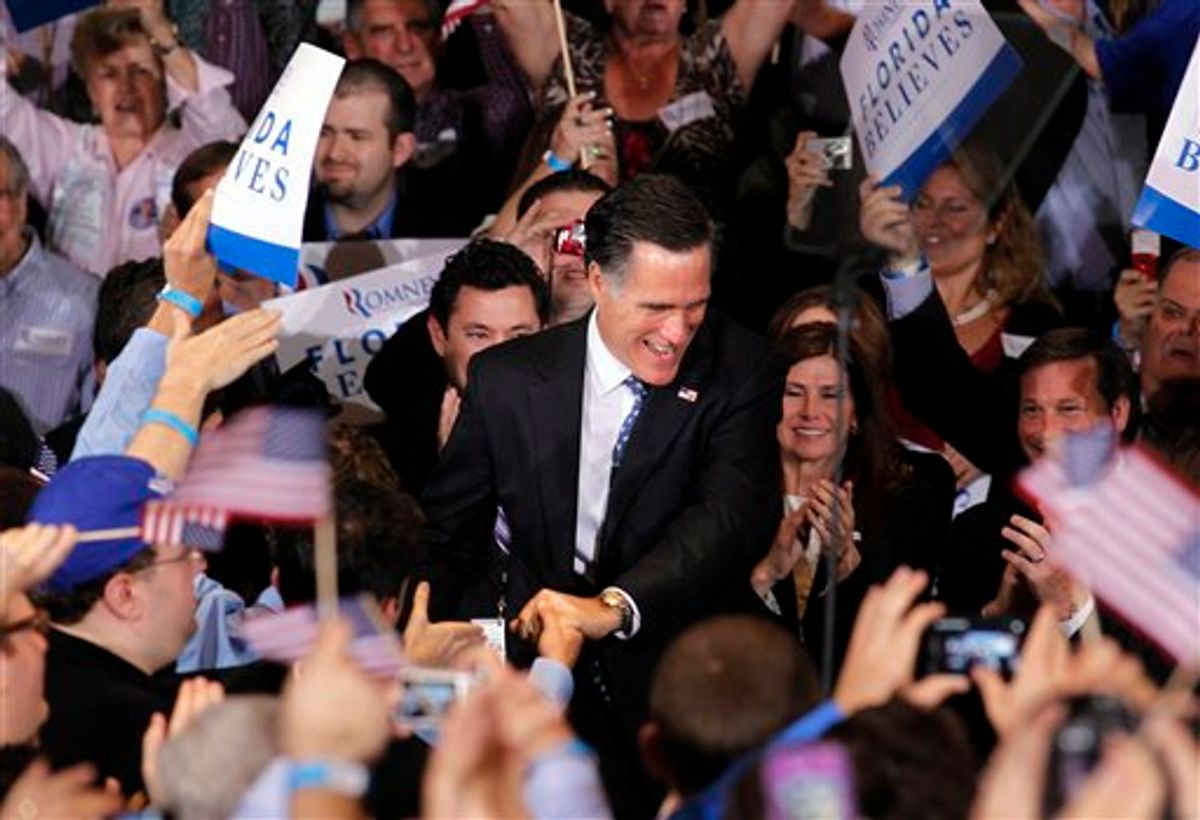 Mitt Romney took a big step on Tuesday night toward wrapping up the Republican presidential nomination. But the morning after his landslide Florida victory he demonstrated -- not for the first time -- why he could be a uniquely flawed standard-bearer for his party.

"I'm not concerned about the very poor," Romney said in an interview with CNN's Soledad O'Brien.

Granted, his words sound more harsh in isolation than in context. Romney was attempting to say that the main focus of his presidency would be the middle class -- "retirees living on Social Security, people who can't find work, folks that have kids that are getting ready to go to college. These are the people who have been most badly hurt during the Obama years."

"Romney seems to have meant that the 'very poor' have a safety net while the middle class doesn’t, and that the latter will be the focus of his campaign. But this is another sign of his apparent inability to avoid saying things that play perfectly into the Democratic strategy of painting him as the candidate of the one percent."

This seems to be a case of Romney's occasional off-the-cuff awkwardness exacerbating one of his chief vulnerabilities as a general election candidate.

His campaign has clearly been aware for some time that Romney's top 1 percent-ness -- which is evident in his personal wealth and lifestyle, his upbringing, his education, his career in private equity and even his manner and public style -- might make him a tough sell to struggling middle-class swing voters. He's crafted an economic program that is slightly less friendly to the rich and slightly more geared toward the middle class than any of his Republican rivals (for instance: no capital gains tax cut for the wealthy) and has sought to preempt Democratic efforts to paint him as an out-of-touch plutocrat. "I'm not worried about the rich -- they're doing just fine," has been one of Romney's campaign trail refrains.

But when he extends that sentiment to include the poor, as he did on CNN this morning, it can have a very different effect on the ears. Which is why O'Brien immediately followed up by telling Romney, "I think there are millions of very poor Americans who are struggling who would say, 'That sounds odd.'"

This could become a recurring theme. Romney's standing with blue-collar swing voters has taken a serious hit in the past month, as his wealth, tax status and Bain Capital work have taken center stage; he's also fared far better among rich Republican primary voters than with middle- and working-class Republicans. Democrats want to portray any Republican running for office this year as a tool of the top 1 percent, but Romney (if he's the nominee) will make a particularly inviting target. Romney understands this and is trying hard to inoculate himself -- maybe too hard.