The Christian right, alive and powerful

Despite media reports of its death, the movement is flexing its political muscles on five separate fronts 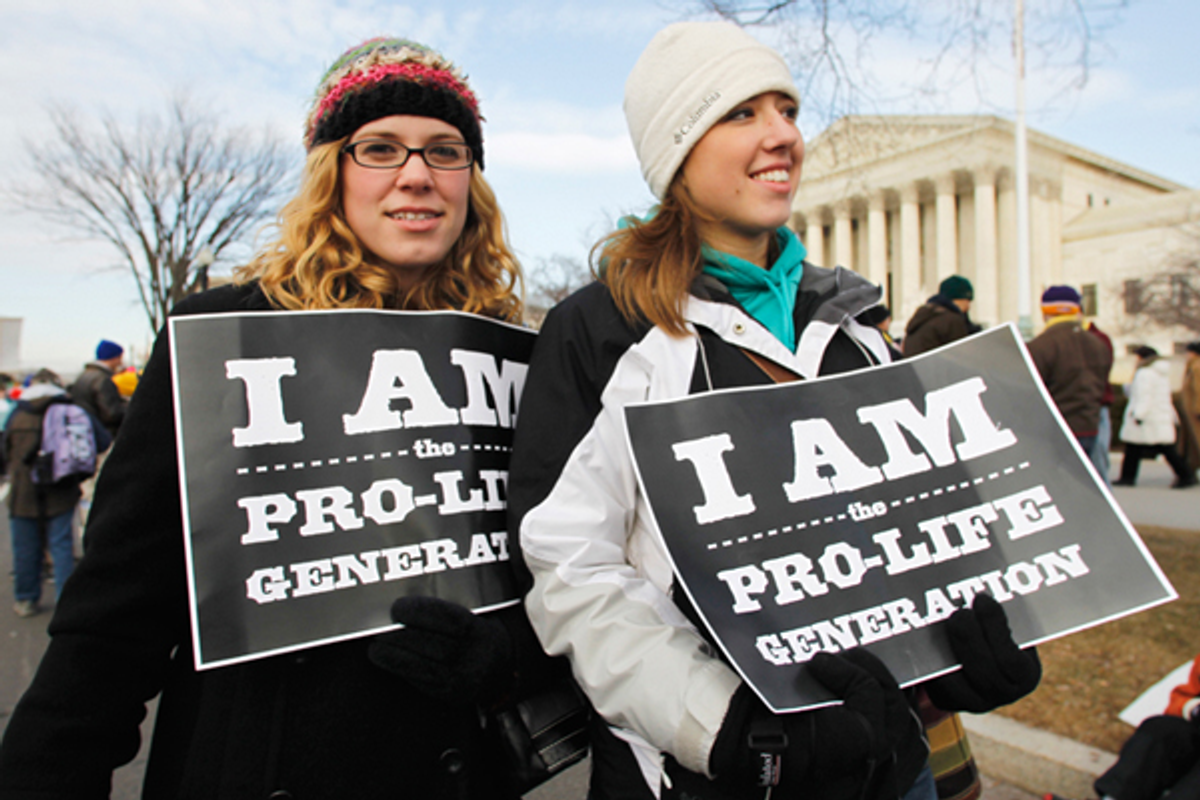 Recently, in a New Republic article titled "The End of the Christian Right," historian Michael Kazin confidently asserts that “the Christian Right is a fading force in American life, one which has little chance of achieving its cherished goals.”

I have lost count of how many times the Religious Right has been declared dead as a political force by someone in the mainstream media. Maybe Kazin’s piece seemed absurd to me because I read it the day after watching every Republican presidential candidate take time from their South Carolina debate preparation to stop by Ralph Reed’s “Faith and Freedom Coalition” event and pledge devotion to the Religious Right’s agenda.

Kazin acknowledges this dynamic, but says, “whatever their influence on the Republican primary, the Christian Right is fighting a losing battle with the rest of the country – above all, when it comes to abortion and same-sex marriage, the issues they care most about.”

Really? The Washington Post reports that with GOP now in control of both houses of the Virginia legislature, the state’s “most conservative Republicans aren’t holding back” and are pushing legislation that, among other things, will “roll back gay rights” and “beef up gun rights, property rights, parental rights and fetal rights.”

Here are five reasons why we shouldn't declare the end of the Christian Right.

Kazin does not address church-state separation or efforts by the Religious Right and its allies, particularly the U.S. Conference of Catholic Bishops, to redefine religious liberty. In the name of “religious liberty,” they demand religious exemptions from generally applicable laws, but only for their religious beliefs; take government funding for religiously based programs but cry discrimination when a government grant program has anti-discrimination policies incompatible with their religious beliefs; portray those who oppose government funding of religion as anti-religious bigots and and claim oppression when government officials are made to comply with the separation of church and state.

Under President George W. Bush, Religious Right leaders’ political support was rewarded with weakened legal protections against tax dollars being used to fund religious discrimination and proselytizing, troubling changes that have yet to be fully reversed by the Obama administration. A phalanx of conservative Christian legal organizations fights daily to weaken the legal separation of church and state, and to reverse restrictions on overt electoral activity by tax-exempt churches.

Kazin cites “the absence of effective, well-known leaders” as a reason for the Religious Right’s decline. It’s true that there’s a shortage of household names among the Religious Right’s leadership, and that the endorsement of Rick Santorum by a group of evangelical leaders didn’t give him the boost they had hoped. But that fact reflects at least in part the decentralization and mainstreaming of the movement. Jerry Falwell, Pat Robertson and James Dobson were like Dan Rather, Peter Jennings and Tom Brokaw back when the networks were the only game in town. Now the Religious Right influences culture and politics through a massive and diffuse infrastructure of religious ministries, educational institutions, think tanks, political organizations, radio and television empires, and online media -- not to mention the elected officials they have put into power in Congress and all across the country.

Newt Gingrich has spent years cultivating support among Religious Right activists by attacking “secular elites” and insisting in books like Rediscovering God in America that our country’s greatness is tied to the notion of a divinely inspired American exceptionalism. His fans weren’t going to abandon him on the say-so of a group of self-appointed leaders.

Virginia Gov. Bob McDonnell, Rep. Michele Bachmann, and other conservative leaders are products of the Religious Right’s educational and leadership pipeline, which is training thousands of college and law school students how to bring their “biblical worldview” to bear on government, the courts and society in general. Journalist Sarah Posner has reported on law school students being taught to advise clients to follow God’s law rather than man’s law at Liberty University, the Falwell-founded school where Romney’s new debate coach built a powerhouse debating team.

Virginia Gov. McDonnell got an MA and JD from Pat Robertson’s Regent University; Rep. Michele Bachmann got her law degree from the law school at Oral Roberts University, which was later taken over by Regent. Right-wing foundations pour millions each year into conservative college newspapers, leadership training programs, and fellowships at “think tanks” that allow people like Dinesh D’Souza to claim the title of “scholar” while turning out dreck like his book portraying Kenyan anti-colonialism as the roots of Obama’s “rage.”

The Religious Right and its conservative allies have put a lot of like-minded federal judges on the courts in the past two decades, and they’ve done quite well with the John Roberts-led conservative majority on the Supreme Court. Religious Right leaders are pulling out all the stops to make sure a Republican president and Senate are in place; the American Center for Law & Justice’s Jay Sekulow told a Faith and Freedom gathering in South Carolina just before the primary there that if “President Romney” were to name two more justices, Sekulow wouldn’t have to worry any more about counting to five when he had a case before the court.

Newt Gingrich, who swamped Romney in South Carolina, staked out a more radical approach to the judiciary were he to be elected president. Gingrich says he would ignore rulings he disagrees with and abolish courts that rule in ways that displease him; he frequently cites church-state issues when complaining about the courts.

4. The Assault on Choice and Family Planning

The 2010 wave of right-wing electoral victories at the state level has brought an accelerated attack on women’s healthcare. According to NARAL Pro-Choice America, 69 anti-choice measures became law in 25 states last year; some of these laws ban pre-viability abortions without meaningful exceptions for women’s health and are clearly designed to challenge Roe v. Wade. Some are designed to force clinics to close and simply make abortion inaccessible for even more women. According to the Guttmacher Institute, 87 percent of U.S. counties already have no abortion providers. A consistent Religious Right rallying cry in recent years has been to “defund Planned Parenthood,” with no apparent regard for the impact on women who count on the organization for basic medical care. Last year, seven states restricted or barred family planning funds from going to Planned Parenthood or any health center that provides abortion care.

Kazin believes it is “exceedingly unlikely” that a President Romney would sign a draconian anti-abortion bill. Why is that? Romney has said repeatedly that he believes life begins “at conception” and would back efforts to enshrine that in law or even in the Constitution. It’s true, as Kazin notes, that Mississippi voters recently rejected a “personhood” amendment. But just this week every GOP candidate except Romney took part in an event organized by PersonhoodUSA  -- at which it wasn’t sufficient for candidates to repeat the “at conception” dogma. They had to agree that legal rights begin at the sperm-meets-egg moment. That this extreme and hugely problematic principle is embraced by presidential contenders is a clear sign of the Religious Right’s continuing influence.

Romney, who named Robert Bork to head his legal advisory team, would almost certainly nominate Supreme Court justices who would continue to chip away at a woman’s right to a legal abortion if not overturn Roe v. Wade altogether -- another of Romney’s stated goals. That would throw the question of legal access to abortion to the states, where a number of laws criminalizing abortion have already been passed contingent on Roe falling. Does Kazin really believe that if the 2012 elections bring us a Republican president and Republican congressional majorities, the Republican base will not demand -- and get -- further restrictions on women’s access to abortion and family planning?

Kazin is correct that the Religious Right is losing the public opinion battle when it comes to support for equality for LGBT Americans, where progress has been extraordinary. The hard-fought end to the ban on military service is a sign that laws are beginning to catch up with public opinion.

But just because the Religious Right is a minority does not make it a powerless one. They and their allies in Congress have managed to prevent passage of federal anti-discrimination protections based on sexual orientation and gender identity in spite of overwhelming public support for such measures. And they have managed to pass dozens of state-level constitutional amendments denying same-sex couples the right to marry – many of those provisions also preventing even the most basic legal recognition and protection for gay couples and their families. In 2010, Maine voters overturned an equality law after opponents forced it onto the ballot. New Yorkers won marriage equality last year (barely), but residents in Maryland and New Jersey did not. There will be several tests in legislatures and the ballot box, both pro and con, in 2012; we may see additional victories, but they are far from assured.

It is good news that support for equality is high among younger Americans, so time seems to be on our side when it comes to LGBT equality, but to cite an economic aphorism, “in the long run we’re all dead.”  Many individuals and families have been harmed and will continue to be harmed by anti-equality campaigns waged by the Religious Right and its allies in the Catholic and Mormon hierarchies.

Progress is not linear or irreversible. Reconstruction gave way to Jim Crow. Kazin looks at statistics about young people’s attitudes, and at the growing group of Americans who claim no religious affiliation, and declares “the end of the Christian Right.” But the increasing number of secular-minded Americans does not prevent the well-organized forces of the Religious Right from continuing to impact public policy, especially in areas of the country where they are strongest. This political and cultural movement will not be sinking beneath the horizon anytime soon.