The fight against cancer -- and abortion?

The Susan G. Komen Foundation says its decision to defund Planned Parenthood isn't political. Does anyone buy it? 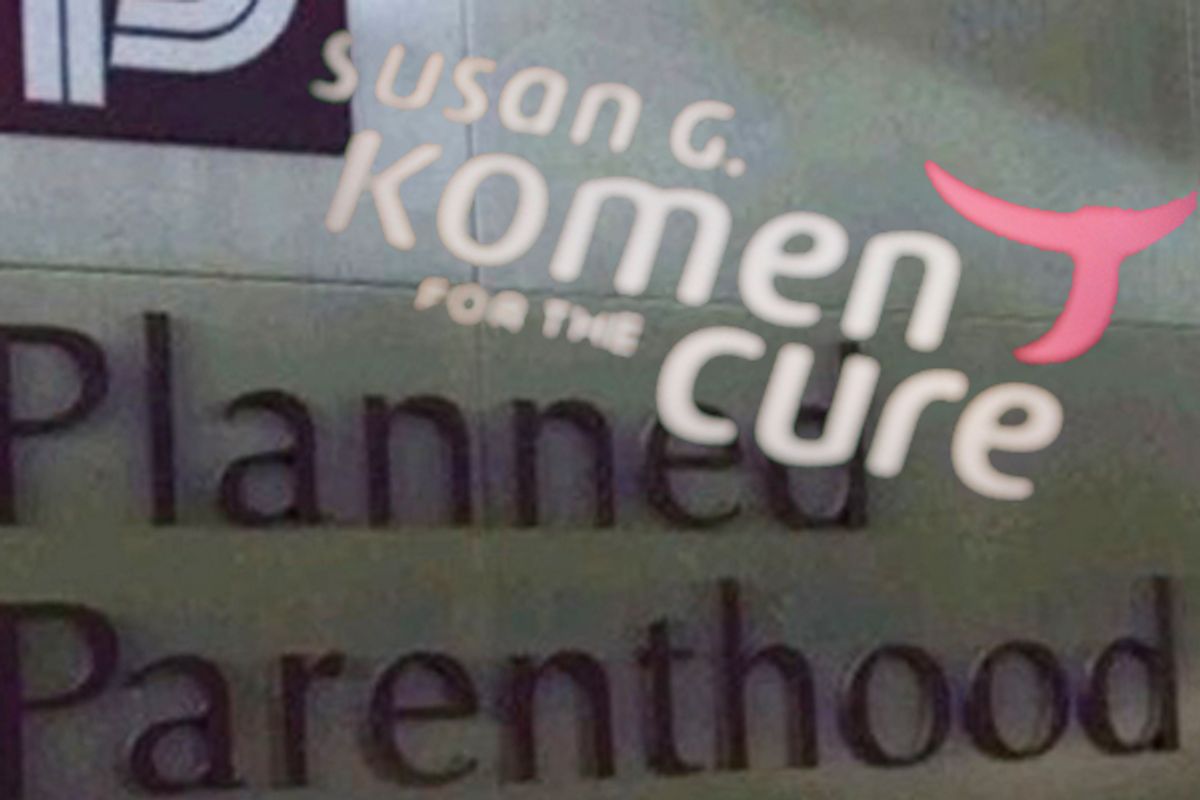 When news broke Tuesday afternoon that the Susan G. Komen Foundation had halted funding for breast cancer screenings at Planned Parenthood, outrage over what seemed a politically motivated move began percolating on Twitter. Soon enough, both "Planned Parenthood" and "Komen" were trending topics.

The Foundation quickly made a public statement explaining that the move has nothing to do with mounting pressure from antiabortion activists -- but few women's rights activists buy it.

Leslie Aun, the Foundation's spokesperson, said the change isn't the result of political pressure but rather, as the Associated Press paraphrases, "the charity's newly adopted criteria barring grants to organizations that are under investigation by local, state or federal authorities." The alleged culprit in this case: Republican Rep. Cliff Stearns, who launched an investigation in September into whether the organization has improperly used federal funds to provide abortions.

This explanation has been met with reasonable skepticism for a number of reasons. For one, the organization has faced increasing pressure from antiabortion activists to cut all ties to Planned Parenthood. For two, Karen Handel, the Foundation's senior vice president for public policy, is antiabortion. During her failed 2010 gubernatorial campaign, she publicly stated, "I do not support the mission of Planned Parenthood." That's not to mention, as sociologist Gayle Sulik, author of "Pink Ribbon Blues," told me, "If Komen held its corporate partners to that standard, we'd see a lot fewer pink-ribboned products on the market."

Cynthia A. Pearson, executive director of the National Women's Health Network, doesn't buy the foundation's explanation, either. "That's specious," she said. Instead, Pearson says, "Komen's chicken. Komen's caving to pressure." This is what antiabortion activists do so well: "They will target the providers and the people who relate to the providers," she says. That's because "they can't make Planned Parenthood stop providing abortions" and "they can't find any evidence that Planned Parenthood is inappropriately using federal funds."

Lauri Andress, a public health researcher and a member of the board of directors of Breast Cancer Action, laments that "there are a lot of courageous people who are threatened because of their affiliation with Planned Parenthood" and still don't falter -- but, she adds, "Susan G. Komen is really responsive to the market and to pressure and so this is consistent with that."

On a similar note, feminist activist Jaclyn Friedman says she is "disgusted but not surprised." She explains, "Komen has long been at the forefront of pinkwashing -- happy to do business with industries (including dairy, cosmetics, and auto) whose products are likely environmental causes of breast cancer, and declining to fund any research into environmental factors," Friedman told me in an email.

Regardless of whether the Komen Foundation pulled grants "because they caved to anti-choice pressure or because of the political leanings of their VP," says activist Jessica Valenti, founder of Feministing.com, "the result is the same -- women's health and lives are going to suffer as a result." That's especially true for low-income women who are most dependent on Planned Parenthood's services.

Feminist activist and author Amanda Marcotte points out that that antiabortion movement "has long opposed health care reform, even though health care reform will prevent many deaths from breast cancer by keeping women with cancer from being squeezed out of their insurance coverage." Given that, it should come as no surprise that anti-choicers would campaign the Komen Foundation to defund Planned Parenthood -- even if all they're preventing are mammograms.

Despite the myth that Planned Parenthood is first and foremost an abortion clinic, pregnancy terminations account for only 3 percent of its services; on the other hand, as the Daily Kos reports, "cancer screening and prevention comprises 17 percent."