Can bells and whistles save the book?

Enhanced e-books bring images, animation, soundtracks and games to the reading experience -- but don't add much 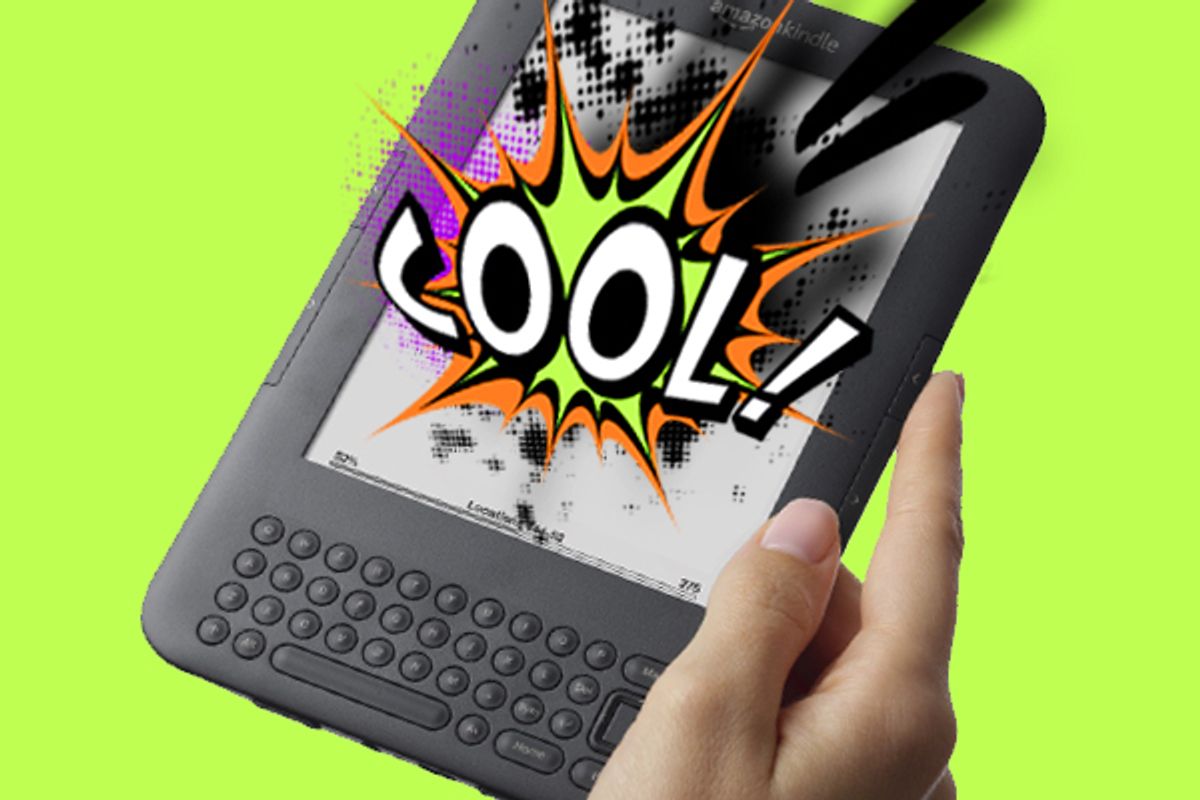 Almost two years after the launch of the iPad, Apple distributed a free copy of a new iBook, "The Yellow Submarine," based on the 1968 animated movie by the Beatles. This e-book -- what's usually referred to as an "enhanced e-book" in the trade -- featured the traditional images and text of a kid's picture book, plus video and music clips. There were also interactive animated features, such as a whack-a-mole bit in the Sea of Holes with heads of the Beatles popping in and out as you tap them. It's the Future! -- exactly the sort of thing various techno-pundits have been insisting that publishers must devise to make e-books seem more valuable to readers.

I sat down with my iPad to read "The Yellow Submarine" with a friend's 7-year-old twins, and within 10 minutes, we were embroiled in a conflict that captured the central, nagging problem with the enhanced e-book concept. Desmond liked playing with the interactive features -- the digital equivalent of the tabs and flaps in a paper pop-up book -- although few of these could steal his ongoing fascination away from the iPad's system-wide "pinch to expand" feature. Nini was aggravated by her brother's pinching, tapping and swiping, and shouted, "I'm trying to read the story!" (Neither one cared much about either the music or the videos, incidentally.) Instead of a cozy interlude of reading, we had a fight.

Attempts to invigorate books with video and other digital bells and whistles keep bumping up against this fundamental problem: You can't really pay much attention to anything else while you're reading, so in order to play with any of these new features, you have to stop reading. If you're enjoying what you're reading, then the attentional tug of all these peripheral doodads is vaguely annoying, and if you're not engaged by the story, they aren't enough on their own to win you over.

The latest crop of enhanced e-books struggle mightily to overcome this dilemma. The vast majority of such books are kids' titles, for the simple reason that literature for young children has always included images. The pictures give kids something to look at as the books are being read aloud to them, and this helps cement the relationship between printed and spoken language. Every children's e-book offers a read-aloud feature in which a recorded voice recites the text. Most offer the ability to tap individual words to hear them spoken aloud. Parents understandably believe that these apps will help their kids learn to read -- and that they make tempting, but still educational, alternatives to television.

The most celebrated children's e-book at the moment is "The Fantastic Flying Books of Morris Lessmore," an app created by the Louisiana-based Moonbot Studios. "Morris Lessmore" is also a film, one of the five nominated for best animated short in the 2012 Academy Awards. It's about a boater-wearing bibliophile who gets blown by a hurricane to a magical library where the books fly around like birds and quote their most famous lines. It's not much of a story, but it looks fabulous. Nevertheless, you can tell a medium is in trouble when artists in some other form start making gooey nostalgic tributes to its inherent "wonder." Although "Morris Lessmore" is sort of an e-book, it's mostly a movie, apparently because only a movie can do justice to the glory of reading.

Moonbot's follow-up, "The Numberlys" is even more gorgeous than "Morris Lessmore." A visual tribute to Fritz Lang's "Metropolis" and set in a colorless, industrial world of numbers, it's about five homunculi (looking just like the little men holding hands around the edges of Chinese pincushions) who invent the alphabet. "The Numberlys" allows its "reader" to help in this manufacturing project by shooting projectiles, bouncing objects and spinning devices to fabricate each letter. What the app illustrates is that the more sophisticated an enhanced e-book becomes, the more closely it resembles a game. Text is even more marginalized in "The Numberlys" than it is in "Morris Lessmore," and while the result is charming, no parents should kid themselves that it will help teach their kids to read; it's more likely to teach them how to play "Angry Birds."

By now, the theory that the novel of the future will be a game has become almost venerable. That's despite indications that -- as the critic and author Tom Bissell pointed out in his book "Extra Lives: Why Video Games Matter" -- narrative and interactivity are in fundamental respects incompatible. Where games offer the pleasure of mastery, narrative offers the pleasure of surrender. You can beat "Halo, " but you can't win "To Kill a Mockingbird"; the notion doesn't even make sense. A "Hamlet" in which Hamlet can blithely decide to kill his uncle as soon as his father's ghost tells him to is not "Hamlet," and, furthermore, not that interesting. Part of the power of that story is its feeling of inevitability, the understanding that each event follows from those preceding it and ultimately derives from the nature of each character.

This potent sense of causality, along with a subtle balance of expectation and surprise, is the great storyteller's secret weapon. When you find yourself caught up in a story like a swimmer in a riptide, unable to tear yourself away, chances are you feel immersed in another world. You know it's not real, but somehow, for a while, it has become far more palpable than the reality around you. You can almost see the characters, feel the cold wind on their faces, hear the pursuing footsteps of the villain, and your heart speeds up. You may even become oblivious to your immediate surroundings. (Video games can create a similar sense of immersion via different means, which is one reason why the two are sometimes confused.)

Narrative constructs this alternate reality in your imagination, and narrative sustains it. What matters is not the story on the page -- or the screen -- but the story in your head. Interactive baubles pull a reader's attention back to the screen, serving as a reminder of the thing you want to go on forgetting: the fact that all of this is just made up, words on a page. Some enhanced e-book publishers have cottoned onto this problem and as a result they've moved away from inserting video or clickable illustrations into their books, and in new directions.

Take, for example "The Adventure of the Speckled Band," an iconic Sherlock Holmes story frequently chosen by e-book enhancers as a giveaway to demonstrate their wares. (Sir Arthur Conan Doyle's works are in the public domain.) Recently, I read the story three times, in three different enhanced formats.

The first, a Vook edition, represents one of the earliest stabs at an enhanced e-book. It presents the complete text with interspersed videos offering background information on Baker Street and Holmesian detection techniques. Some of these mini-documentaries are narrated by a man wandering around the streets of London, inexplicably dressed in formal evening wear and top hat and looking like a music hall performer, but you can't expect "Masterpiece Theatre"; a problem with adding videos onto books is that it's expensive to produce. Some of the videos are interesting, but only after you've read the story, which means there's no particular reason why they should be packaged with it.

A newer company, BookTrack, dispenses with video entirely and sells books with accompanying soundtracks that keep time with your reading. If it's a dark and stormy night in the story, the soundtrack plays rain effects. BookTrack's accompaniment to "The Speckled Band" mostly consists of crackling fires, ticking clocks and chirping birds (for the scenes in the countryside). This is pleasant enough, but once I slipped into the tale (which works surprisingly well even when read three times in a row), I largely ignored it. Perhaps this indicates a kind of success -- at least I wasn't distracted from Holmes' exploits. On the other hand, I was so intent on the old house of my imaginings that I didn't need creaking floorboards and footsteps to make it more present. And as someone who resents overbearing movie soundtracks instructing me on how to feel about every scene, the music was simply obtrusive.

The most enjoyable version of "The Adventure of the Speckled Band" is published by Byook (I know, I know). It's sort of an adult picture book that features both BookTrack-style soundtrack and marginal illustrations that soak into the page over the course of a minute's reading. These reminded me of the elaborately decorated editions of L. Frank Baum's Oz books passed down to my siblings and me from my father's parents; hovering at the periphery of my vision, they really were atmospheric without being distracting. And because Conan Doyle's story hangs on the layout of a room and of the rooms along a creepy corridor, a couple of the illustrations were actually helpful. An abridged version of the original story (heretical to purists, but I can't say I minded), the Byook "Speckled Band" also features some fine original full-screen art in a style resembling paper cutouts, a little like the full-page plates routinely found in print novels during Holmes' time.

Being shown the floor plan of the Gothic Stoke Moran manor house isn't essential to understanding "The Speckled Band," but it didn't pitch me out of the imaginative space of the story, either. To the contrary; having to puzzle too hard over the text to visualize the configuration of a scene (as I did when I first read the story, at age 12) can sometimes break a story's spell. When an author's fictional world is very complex, and spans several volumes -- as is the case with, say, George R.R. Martin -- it's easier to see how an enhanced e-book can help sustain the illusion of an alternate reality, rather than undermining it. Martin's U.K. publisher, HarperCollins, has just come out with an enhanced e-book of "Game of Thrones," with maps that track the characters' movements and a glossary so readers can look up any character whose identity has temporarily slipped their minds -- Martin has created over 1,000 of them.

For the most part, though, fictional narratives, when they work, don't really need digital enhancements. When they don't work, the enhancements can't save them. Suzanne Collins' series "The Hunger Games" seems piercingly vivid to her millions of young (and not so young) readers, even though none of the print editions of the books have contained a single image of her heroine. An expertly told story is all the enhancement most works of fiction require.

But, of course, not all books are fiction or narrative. It's with nonfiction -- a vast category of books, unfortunately defined by what it's not -- that the enhanced e-book offers the most thrilling potential and the most illuminating accomplishments. I'll be taking a look at those next week.