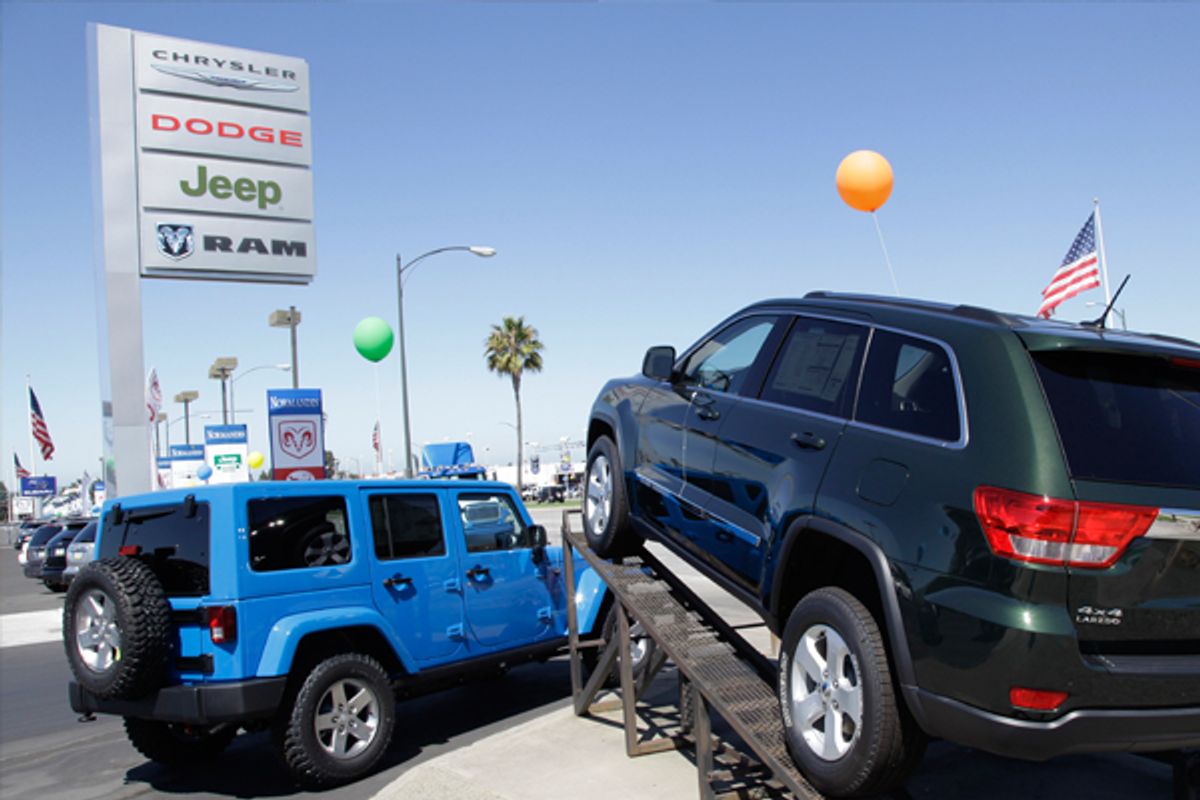 Dueling pundits, start your engines: The auto industry kicked off 2012 with a turbo-powered roar, and Democrats won't wait long to make hay out of the impressive numbers. The question of the day: How will the GOP respond to one of the most successful displays of forceful government intervention in the economy the U.S. has witnessed in decades?

The numbers are hard to argue with: After the major automakers released their January sales figures, Autodata Corp. estimated cars raced out of lots at an annualized sales rate of 14.18 million vehicles for 2012. That's the best month of sales -- excluding August 2009's Cash-for-Clunkers -- since April 2008. GDP forecasters are likely rejiggering their first-quarter estimates even now.

Among domestic auto manufacturers Chrysler led the way, with sales surging 44 percent from a year ago. GM dipped 6 percent -- but that was actually less than analysts expected, since GM's numbers a year ago were boosted by big discounts and other incentives. Ford's sales rose 7 percent.

Further underlining the good news, Chrysler CEO Sergio Marchionne announced that, as a reward for the company's first profitable year since 2005, all hourly workers would be receiving a $1,500 bonus. Meanwhile, GM announced plans to invest $200 million in a new stamping plant in Arlington, Texas. Oh, and Michigan's unemployment rate declined again in December, to its lowest point in more than two years.

Chrysler's numbers are particularly noteworthy, because without the Obama administration's combination bailout/managed bankruptcy, Chrysler almost assuredly would not exist. Indeed, on Tuesday, while Florida Republicans were smacking Newt Gingrich around, Obama attended the Washington Auto Show and delivered a none-too-subtle jab at his likely Republican opponent, Mitt Romney.

"It's good to remember the fact that there were some folks who were willing to let this industry die," said Obama.

That's a headline that Romney probably would like to take back, in light of the success of Obama's auto rescue, as well as the electoral importance of Michigan, a key swing state. You could argue that it sounds, you know, a little callous, along the lines of "I like firing people" or "I'm not concerned with the very poor."

But this is Mitt Romney we are talking about, an absolute master at the facile reinvention of his own history. In fact, he's been arguing ever since it became obvious that the White House strategy was working that what he had really been advocating in his Op-Ed was exactly the kind of managed bankruptcy approach that the Obama administration ended up pursuing.

Romney's revisionist history, strictly speaking, doesn't hold up. Romney wanted Chrysler and GM to go through a bankruptcy process that was organized out-of-court, by the private sector, and involved no new federal loans. The most he was willing to entertain, as far as government intervention was concerned, was a federal pledge to guarantee the debt of any new equity investors who might be willing to pump fresh cash into the troubled car companies. His criticism of the Obama strategy throughout 2009 was unremitting. As he wrote in the National Review's The Corner blog, "What is proposed is even worse than bankruptcy – it would make GM the living dead."

The problem, however, was that at the time, in the spring of 2009, credit markets were effectively frozen. There were no prospective new investors willing to take any risks at all, even with a government backstop. Instead, hovering over the quickly decaying corpses of the two automakers were a flock of GM and Chrysler bondholders and creditors all desperate to grab whatever cash they could from what would have been a very, very messy liquidation. And the downstream impact of liquidation on the automotive supply chain and Midwestern Rust Belt state economies would have been a catastrophe.

Without federal loans the automakers would not have survived. As Chrysler's Marchionne told CNN when questioned about Romney's critique:

Whoever told you that is smoking illegal material. That market had become absolutely dysfunctional in 2008 and 2009. There were attempts made by a variety of people to find strategic alliances with other car makers on a global scale and the government stepped in, as the actor of last resort. It had to do it because the consequences would have been just too large to deal with.”

It'll be fun to see how all this plays out as Obama and Romney make their visits to Michigan in upcoming months. Obama will point, with justice, to his own record. Romney will try to pretend that Obama actually was following Romney's advice. Voters will have to decide whom to trust: A president who took enormous political heat for saving the auto industry, or a former private equity wheeler and dealer who said government should have just let the market work its destructive magic.

Romney considers himself a "favorite son" in Michigan -- his father was governor and the president of an auto manufacturer. But his position seems like a tough sell.