The latest numbers are good political news for Obama, but the reality for the average citizen remains bleak 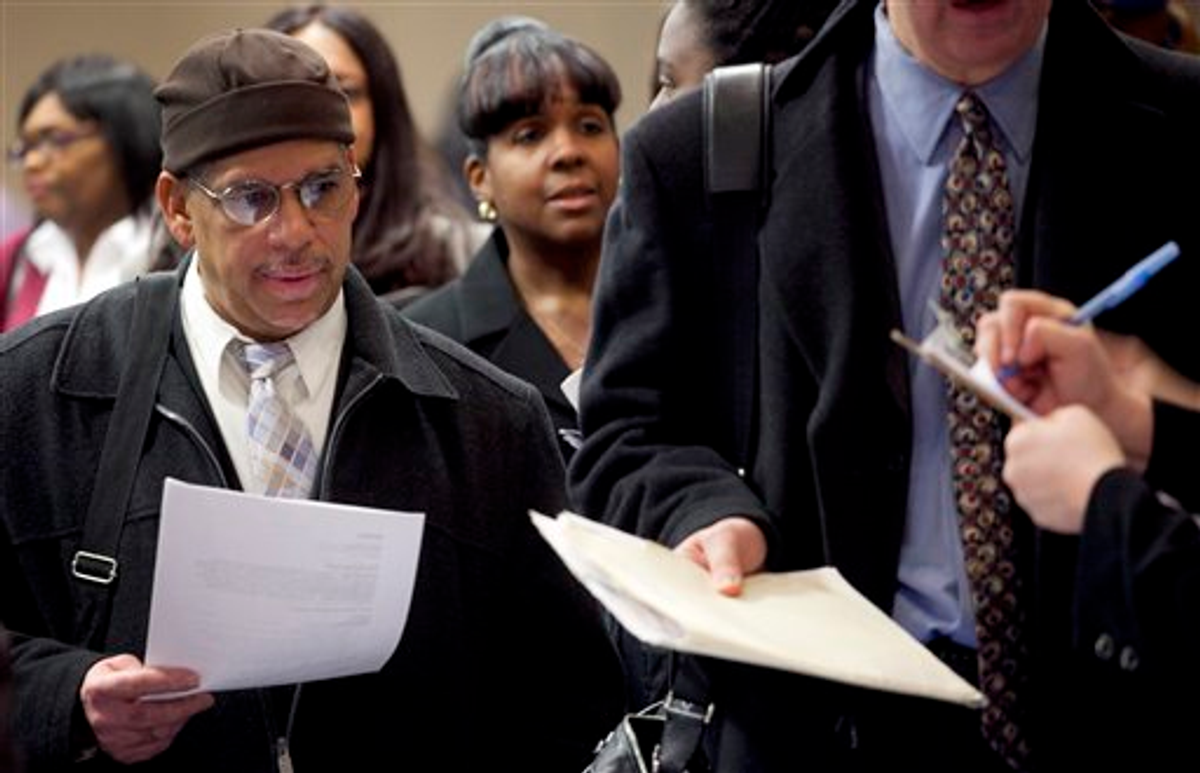 The most significant aspect of January’s jobs report is political. The fact that America’s labor market continues to improve is good news for the White House. But as a practical matter the improvement is less significant for the American work force.

President Obama’s only chance for rebutting Republican claims that he’s responsible for a bad economy is to point to a positive trend. Voters respond to economic trends as much as they respond to absolute levels of economic activity. Under ordinary circumstances January’s unemployment rate of 8.3 percent would be terrible. But compared to September’s 9.1 percent, it looks quite good. And the trend line – 9 percent in October, 8.6 percent in November, 8.5 percent in December, and now 8.3 percent – is enough to make Democrats gleeful.

But the U.S. labor market is far from healthy. America’s job deficit is still mammoth. Our working-age population has grown by nearly 10 million since the recession officially began in December 2007 but many of these people never entered the workforce. Millions of others are still too discouraged to look for work.

The most direct way of measuring the jobs deficit is to look at the share of the working-age population in jobs. Before the recession, 63.3 percent of working-age Americans had jobs. That employment-to-population ratio reached a low last summer of 58.2 percent. Now it’s 58.5 percent. That’s better than it was, but not by much. The trend line here isn’t quite as encouraging.

Given how many people have lost their jobs and how much larger the total working-age population is now, we’ve got a long road ahead. At January’s rate of job gains – 243,000 – the nation wouldn’t return to full employment for another seven years.

When they’re not blaming Obama for a bad economy, Republicans are decrying the federal budget deficit and demanding more cuts. But America’s jobs deficit continues to be a much larger problem than the budget deficit.

In fact, we can’t possibly achieve the growth needed to reduce the budget deficit as a proportion of the total economy unless far more people are employed. Workers are consumers, and consumer spending is 70 percent of economic activity. And cutting the budget means fewer workers, directly (as government continues to shed workers) and indirectly (as government contractors have to lay off workers) and therefore fewer consumers.

Yet deficit hawks continue to circle. State and local budgets are still being slashed. The federal government is scheduled to begin major spending cuts less than a year from now. Republicans are calling for more cuts in the short term. Austerity economics continues to gain traction.

Meanwhile Congress is debating whether to renew extended unemployment benefits. This should be a no-brainer. The long-term unemployed, who have been jobless for more than six months, comprise a growing share of the unemployed. (In January they rose from 42.5 percent to 42.9 percent).

Republicans say unemployment benefits are prolonging unemployment, that people won’t get jobs if they get unemployment checks from the government. That’s claptrap, especially when there’s only 1 job opening for every 4 people who need a job. Republicans also say we can’t afford to extend jobless benefits. Also untrue. Jobless workers spend whatever money they get, and their spending keeps other people in jobs.

Government should extend unemployment benefits, and not cut spending until the nation’s rate of unemployment is down to 5 percent. Then, and only then, should we move toward budget austerity.

The job situation is better than it was but it’s still awful. The jobs deficit is still our number one economic problem. Forget the budget deficit until we tame it.