Sometimes you just can't win. Plus: OK, not all the airport bookstores are bad 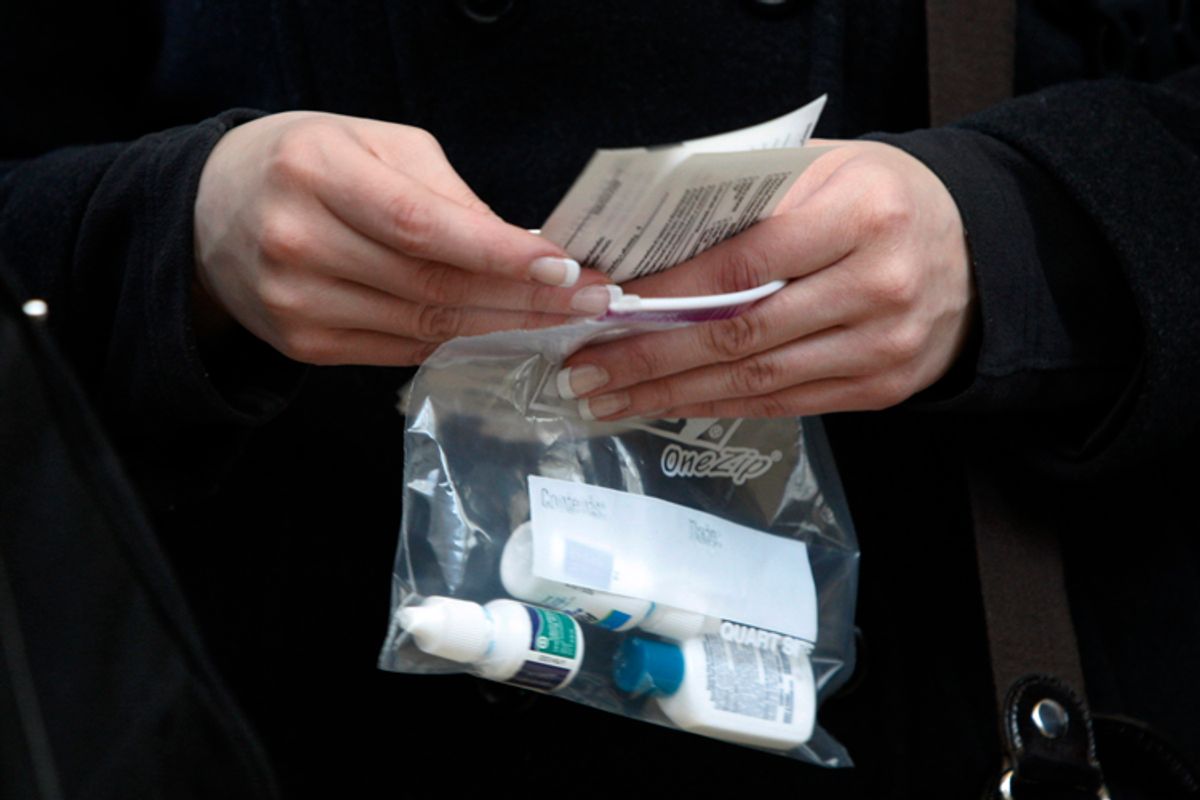 Thoughts running through my head at the TSA checkpoint ...

All of these measures in place today -- the liquids and gels rules, the pointy object confiscations, the multiple ID checks, the body-scanners and the pat-downs -- would they have stopped the Sept. 11 attacks?

Of course not. The success of the 2001 attacks had nothing to do with box cutters. The hijackers' critical tool was an intangible one: the element of surprise. That is, taking advantage of our understanding and expectations of a hijacking. What weapons they had in their bags was irrelevant. They could have used anything.

For that matter, would any of these measures have prevented the terrorist bombing of Pan Am 103? How about the bombings of Air India 182 or UTA 772?

Again the answer is no. It was bombs in the lower holds that got those planes.

I don't know about you, but when I'm on a plane I worry a lot more about what's going on below deck -- in checked luggage and cargo -- than I do about passengers and their carry-ons. The Transportation Security Administration tells us that all checked bags are scanned nowadays for explosives, and that's about the most valuable thing the agency does for us. I just hope agents do it with as much over-the-top scrutiny as they use to paw through carry-ons looking for forks and toothpaste.

I'm traveling off-duty, just a regular old passenger. Approaching the body scanner, I "opt out," as I always do. I'll be taken aside for a thorough pat-down.

I don't opt out because of worries about radiation. I do it because I find it appalling that passengers are effectively asked to pose naked in order to board an airplane. And because the scanners are strategically ineffective. I don't "believe in them," you might say. I mean, think about it: You've got a scanner at one checkpoint, but no scanner at the one right next to it; scanners at some terminals, but not at others. Are terrorists really that stupid? And what about overseas? If somebody is going to sneak something deadly through a checkpoint, it is far, far, far more likely to happen at an airport in Asia, Africa, South America or the Middle East, than in Peoria, Wichita or Cleveland.

Is this one of those "follow the money" situations? Are these machines really in the interest of safety? Is that what this is about? Or is it about the corporations who stand to make billions of dollars in their design and deployment? Why not explosives-sniffing dogs instead? Are they not just as effective, and cheaper and friendlier to boot? Or is that the problem?

I'm chatting with the TSA guard about this while he frisks me. He shrugs. "A lot of waste in government," he says.

Oh great. Off to the side, the X-ray machine has detected an extremely dangerous 6-ounce bottle of aloe vera gel in my roll-aboard.

She sticks a gloved hand inside and pulls out the tube. The look she gives me -- it's a scolding sort of glare with an unmistakable glint of satisfaction.

"I don't have a scale to weigh liquids, sir."

"Why do you need a scale? You can just look at it. It's a 6-once tube and obviously it's only half-full."

She doesn't look. "Sorry. You cannot bring this through."

Plop. She throws my aloe into a waste barrel.

Aha! But in tossing it away like that, hasn't she just admitted that the container is harmless? After all, if it was something potentially dangerous, you wouldn't just fling it into the garbage.

Are TSA screeners looking for bombs, or are they looking for innocent liquids? I'm reminded of those tests I'd heard about, when, supposedly, water bottles were attached to mock-up bombs and sent through the X-ray machines. Screeners found the bottles, while the bombs went sailing through. "An Easter egg hunt for minor banned items," in the words of former TSA chief Kip Hawley, from his upcoming book, "Permanent Emergency."

"Look," I say. " Since you're throwing that tube away, you're telling me that you know it's nothing harmful."

She stares at me, clearly annoyed and unable to tell if I'm kidding or not.

I am kidding, of course. My gel is gone for good; another $4.65 into the TSA hole. But am I not correct at the same time? I've lost my property, but I feel that I've made a useful point and can walk away having established the upper hand. Yeah. I'm proud of my snappy little assessment: so tight, so logical and righteous!  Take that, TSA!

And it's exactly at this moment, the screener's eyes still fixed on me, that my cellphone goes slipping out of my hand. I drop it; catch it; drop it and catch it again. My arms are wiggling and flailing in a ridiculous little dance until finally the phone flies completely away from me. It goes clattering off a stack of gray bins and slides pathetically onto the floor -- directly at the screener's feet.

She picks up the phone and hands it to me. "Good day, sir."

I skulk away feeling like the biggest goofball in the world.

And maybe this was a kind of divine intervention, a dose of humiliation engineered to shut me up and kick me on my way. A lesson summed up in two easy words: lost cause.

Re: Airport bookstores, or lack thereof

As various emailers pointed out, not every airport bookshop is a glorified magazine stand. There are still some good retails options in U.S. terminals. Renaissance Books at Milwaukee, for example, got several kudos from readers. There's Powell's still at Portland's PDX, I'm told. I can personally vouch for a place called BookLink (formerly a Borders franchise) at terminal A in Boston. Even JFK's Terminal 3, for all its demerits, has a decent bookstore just inside the east-side security checkpoint, abeam gates 4 and 5.

And the following letter is from a vice president of Hudson Booksellers, one of the companies mentioned in my story:

Having been a buyer for airport bookstores for over 15 years, I have witnessed the amazing growth and diversification of airport bookselling, as well as the recent downturn, largely due to the e-book effect. Blending customer expectation with personal passion is the essence of our selection process. Yet, so frequently when we see Hudson in print, including in your article, we are pigeonholed as corporate peddlers of “airport books." Clearly our message and product isn’t getting through the way we’d like.

Airport bookstores are in competition against many other product categories. For the last 15 years my team and I have been turning over every stone in trying to meet the challenge of bringing the best books to the most readers.  One of your reader comments mentioned -- incredulously -- discovering Roberto Bolaño at the airport in San Francisco. But that type of thing honestly happens every day at Hudson. We’ve sold hundreds of Bolaño’s novels, which are part of our core bookstore selection. You mention Gary Shteyngart, another personal favorite, who we have been promoting since "The Russian Debutante’s Handbook." We went all out with "Absurdistan" and sold over 26,000 copies the year it came out, which I believe was more than 25 percent of all copies sold. We have many great locations with a locally curated assortment that I would put up against Powell’s or Compass, etc. -- in Denver, Chicago, Pittsburgh, Newark, Raleigh.

I am also surprised at your statement about your own book, "Ask the Pilot." We have carried your book since it came out in 2004, selling over 1,000 copies in one LAX store alone -- thousands more over the years -- and we are still carrying it in a few locations.

Author's note: In retrospect, I ought to have been a little more gracious in my references to Hudson.  Indeed, many of the chain's airport outlets are full-fledged bookstores with a very good selection, and the chain did stock and sell many copies of my book when it was new. (Though, honestly, the thing is so out-of-date at this point that I'm pleased when I don't find it for sale.)