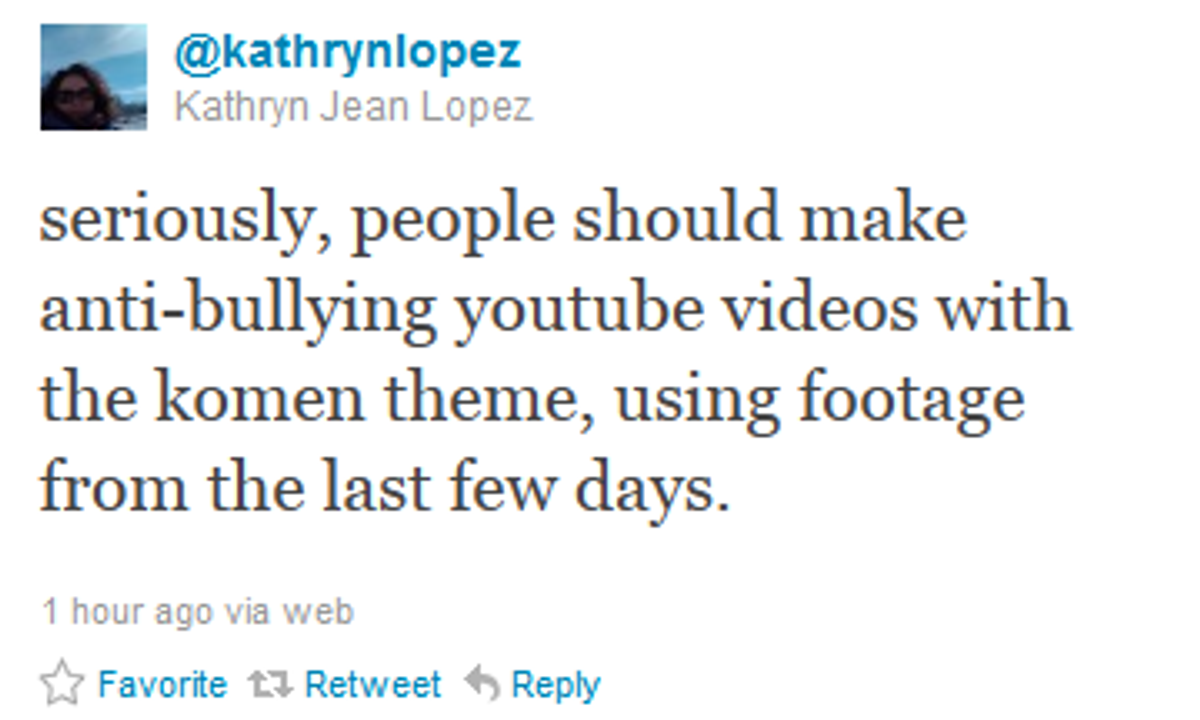 Poor Kathryn Jean Lopez, the National Review Online's resident delicate flower, anti-feminist traditional Catholic, and enemy of all homosexualists and abortionists. She was so delighted when Susan G. Komen for the Cure announced that it would no longer be sending grant money to Planned Parenthood to fund breast cancer screenings and mammogram referrals, because it meant that her side had "won" a battle in the war against women's health providers that perform abortions and provide contraception.

She was so excited, in fact, that she forgot that the decision was NOT ABOUT ABORTION WHATEVER GAVE YOU THAT IDEA. Later she posted that hilarious YouTube video of Komen CEO Nancy Brinker explaining that the Planned Parenthood decision was not in any way political, no sir. (At least one commenter noted the disconnect: "Really curious what K-Lo thinks Komen is actually doing here. When the news broke, she seemed pleased and pointed out right-to-lifers had been trying to force Komen to shuck PP. But she also believes Komen's [ridiculous] assertion that the decision has nothing to do with politics and was just a big coincidence? Hunh?")

After a great deal of public outcry, Komen reversed itself and said Planned Parenthood would be eligible for future grants.

This, obviously, was very sad news for K-Lo. She seemed stunned at first, but then decided that Komen was the victim of bullying. The years-long campaign by antiabortion groups to lobby Komen to cease sending money to Planned Parenthood -- the campaign Lopez cited in her initial post crowing about that campaign's victory -- was just regular political speech, but the widespread outcry over the decision was, obviously, bullying. (Or, as Daniel Foster put it, "gangsterism." Foster only approves of reasonable and polite "speech," which is to say, writing checks.)

Lopez, like many conservatives whose baffling interpretation of common liberal concepts leads them to find "hypocrisies" where none exist (Michelle Obama ate a french fry!!!!), darkly mutters about "that anti-bullying campaign," because accusing a massive charitable foundation of playing politics with its supposed mission is patently the same thing as humiliating vulnerable young people until they become suicidal.

(Bullying, for Lopez's future reference, is not just "people being mean to you," but more accurately lengthy campaigns of abuse carried out against people who are or feel unable to defend themselves. Just ask the students of Anoka-Hennepin public schools if you're still confused.)