A Mormon "frontlash" for Romney?

The Republican front-runner is benefiting from LDS voters in Nevada; we look at Mormon voting patterns 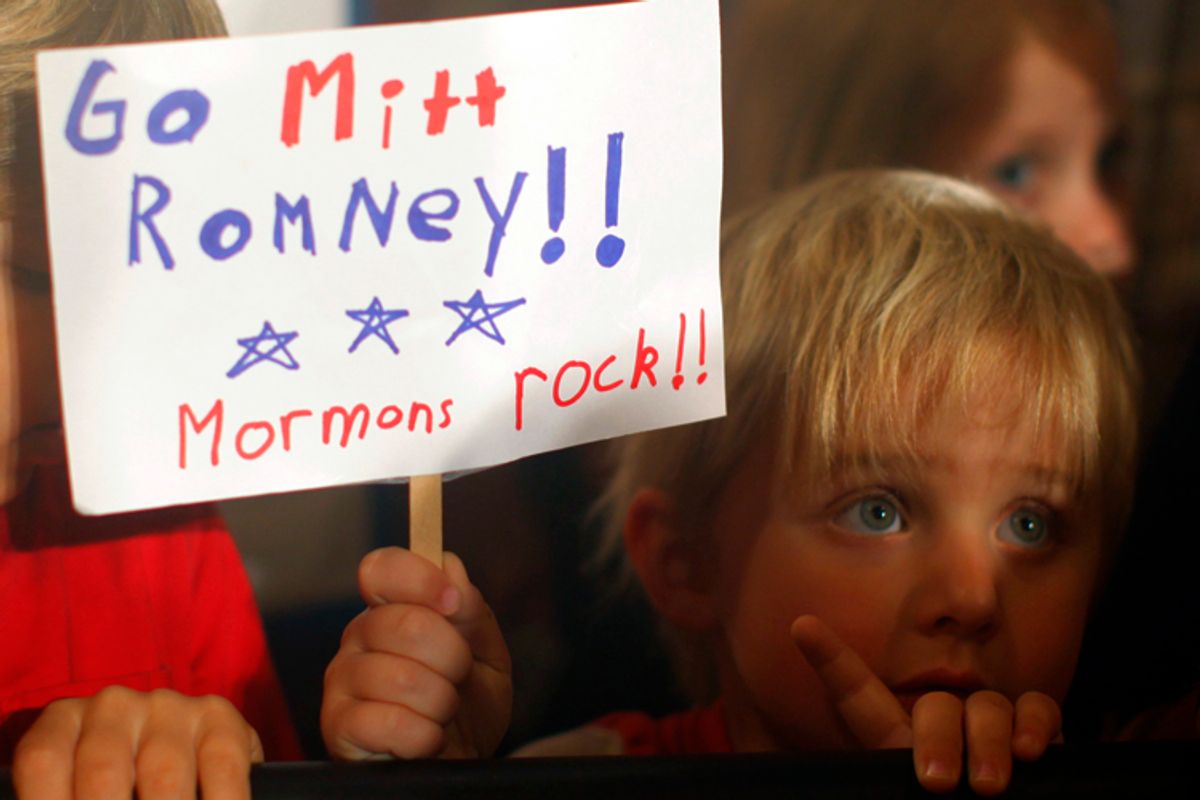 A poll out of Nevada this week showed Mitt Romney winning 45 percent of those Republicans likely to attend Saturday’s caucuses. And the internals of the poll showed Romney's base: 86 percent of Mormon likely caucus-goers support him.

That’s a significant number, especially given that Mormons, who represent 7 percent of the state’s population, made up a quarter of caucus-goers in 2008, according to the Las Vegas Review-Journal.

It's worth remembering here that Nevada is considered a swing state and Romney could benefit from what Ed Kilgore calls a Mormon "frontlash" in a general election contest against Barack Obama. In the primary, Kilgore points out, Mormons "will also matter on February 28 in Arizona (6% LDS), and in later caucuses in Idaho (27% LDS) and Wyoming (11% LDS), right down to heavily-Mormon Utah, which ends the whole nominating process on June 26."

To learn more about Mormon voting patterns, I spoke with Quin Monson, a professor of political science at Brigham Young University.

The polls out of Nevada are saying Romney will win 86 percent of Mormon caucus-goers. Does that high number surprise you?

Well, based on 2008 results both in Utah and Nevada, that doesn't surprise me. It was similar -- about 9 out of 10 Mormons in Utah supported Romney. And that was about the same number in the entrance polls in 2008 in Nevada.

What do you think the dynamic is here -- is this a solidarity vote?

There are a lot of things going on. One, Mormons are overwhelmingly Republican. A recent Pew survey shows that and there's other data that I have that show the same thing. So it's a choice among Mormon Republicans of which candidate to go for, and I think there is a sense of solidarity with Romney. It's not unlike Catholics and John F. Kennedy in 1960. In that context, Catholics felt like they were a bit of a beleaguered minority, sort of beginning to be better accepted in American society but still viewed with some suspicion. And they saw Kennedy in part as representing their group and representing it well. I think Mormons see Romney in the same light. Even some people in the church that don't necessarily agree with him -- either because they're more conservative or more liberal than Romney -- appreciate that he's kind of taking one on the chin for his religion at some points. It seems to get linked to him in so many ways that even Mormon Democrats will speak in favorable terms of him and have admiration for the fact that he's had to put up with so much.

In terms of party identification among Mormons, why is it so overwhelmingly Republican?

The first thing to say is that it wasn't always that way. When you go back in time, you don't have a lot of national data but you have data from Utah, which is a reasonable measure. Utah was even more heavily Mormon the further back in time you go. Utah voted for Lyndon Johnson and had a Democratic governor and state Legislature in the '70s. So it wasn't that long ago that it was a fairly balanced place politically. Go back even further and it was heavily Democratic. At the time of statehood in 1896, the Republican Party was the anti-Mormon party.

Well, I think the New Deal brought some conservatives over to the Republican side. What really happened mostly was the 1960s happened. And Roe v. Wade happened. There was a shift in American culture, and then the national parties shifted. The parties were divided internally on social issues in the '50s and '60s. I don't think civil rights was as big a deal for Mormons as other issues, abortion and gay marriage in particular. The parties into the '70s took more clear and opposing positions on social issues, and Republicans ended up taking positions that side more consistently with the church. I don't think the church changed. The parties changed, and that left more Mormons feeling at home with the Republican Party.

Everyone is expecting the presidential election this year to be primarily about the economy. Are Mormons somehow naturally in sync with the GOP on economic issues?

I do think there's a natural affinity. There's a lot of emphasis among Mormons on self-reliance, and that plays right into how some people would view American exceptionalism or perhaps rugged individualism. There is a communitarian element to Mormon theology, but I don't know that that has been emphasized in modern times. Early on, when Mormons had problems with their neighbors in places like Missouri and Illinois it was in part because their sense of communitarianism conflicted with the surround community. And then later in Utah, there were some experiments in communitarian living. But the faith is much more focused now on self-reliance; there is an emphasis on helping your neighbor, but mostly  in the context of your Mormon congregation. But that emphasis doesn't include government most of the time; government is left out of the rhetoric. What's in the rhetoric is that individuals should become self-reliant, should get an education, should provide for their families, and so on.

Turnout among Mormons is also expected to be high in Nevada and elsewhere. Is this because of the Romney candidacy?

There is a clear encouragement from the church -- official statements read over the pulpit -- about two things. One is political neutrality in partisan elections: Members are always reminded not to use church facilities or lists and so on. And then, two, that members should be involved and vote. Those statements are typically read a couple weeks prior to a major election. In the Romney case, and in a place like Nevada where you have a sizable Mormon population, even though there is no official action by the church, there is a strong social network that could lead to Mormons being mobilized by each other.

Obviously we see Romney will get lots of support from the Mormon community. But on the other side of it, is there any way to quantify how much anti-Mormon sentiment might hurt him?

I've done some work with some colleagues on this to attempt to measure the affect of framing Romney as a Mormon. And it does have a clearly negative effect. What we've done is create little vignettes in national surveys in which we write biographical statements about Romney and add different pieces of information in. Sociologists talk about a social contact hypothesis, where contacts with a group you're unfamiliar with helps you to become less fearful and more understanding, and to like them more. That would lead you to believe that if people know a Mormon, they might be resistant to a negative message about Romney being a Mormon.

What we find is that people who know a Mormon really well -- a family member or close friend -- clearly resist any kind of negative information about Romney and his religion. Because they know otherwise. People that don't know a Mormon at all are strongly affected by that information, but you can also counter it with positive information and they'll take that into account. What's really interesting is that people who know a Mormon in passing -- maybe a guy at the office -- react strongly to the negative information and you can't counterbalance it with positive information. We think that has something to do with the fact that Mormons are, in fact, a little different. And if you know one in passing you know enough to know that that person is a little different, but you don't know enough to know that, although they're different they're probably just fine.

I'm asking you to speculate, but do you think in a general election context Romney would be helped or hurt by being Mormon?

If Mormons made up 25 percent of the population, I'd say it would really help him. But Mormons are at best 2 percent of the population. I think on balance it's probably not going to be helpful. The reason I think he has a chance is that it's not going to be the focus of the conversation for most of the time. I think that's why Romney doesn't bring it up and when it is brought up he quickly tries to move on to something else. If it becomes central to his campaign for some reason, I think it will be to his detriment. I would look for an attempt by -- not directly from the Obama campaign -- but from surrogates or others, to raise questions about Romney's Mormonism. If it continues to be a kind of sideshow and the main issue is the economy, then I don't think his Mormonism does a lot of damage.