Iraq vets on the road to recovery 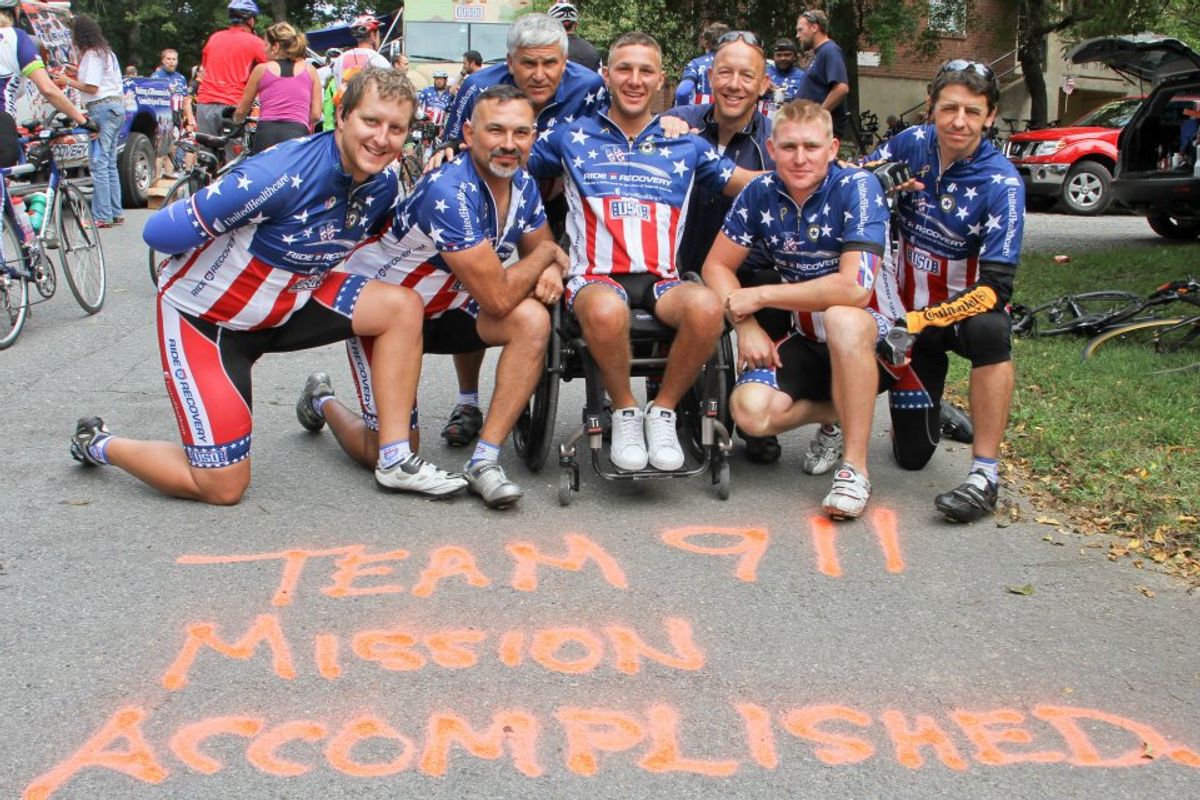 On the road to recovery
--

Last September, I was in the saddle of my bicycle somewhere in the middle of Pennsylvania. Dark green farms materialized from the mist as one hill rolled into another. Somewhere out here, United Airlines Flight 93 crashed.

In about a day, I would be at the exact place where the plane went down, by the sides of dozens of troops who were injured in the wars in Afghanistan and Iraq. I was chronicling a solemn moment on the 10thanniversary of the 9/11 attacks for “Recovering,” the documentary film I’m directing about troops who have turned to an unlikely recreation, bicycling, to heal from wounds such as post-traumatic stress disorder and lost limbs.

But Shanksville was far away. It was raining and cold and I kept pedaling. I was wet, breathing hard, my ass hurt and heart felt like it could burst. I wanted to stop. But that was out of the question. I wasn’t going to let the other cyclists down.

I looked down at the Garmin mileage tracker on the handlebars of my road cycle. It read: “790.”

In my 12 years as a journalist this moment ranks high in terms of unusual situations that I’ve been in. Here I was, supposedly reporting and the battery for the tiny HD camera attached to my bike had run out. Walkie-talkie contact with my director of photography, “Blood Diamonds” author Greg Campbell, was long lost.

Alone with my thoughts and too tired to talk or do anything constructive for the film, I kept spinning my legs. I wondered if I ought to be on the back of a motorcycle, armed with a camera and helping Greg. Or maybe I should be in a van, waving my arms and squinting at horizons, sipping a perpetual cup of lukewarm coffee and looking like a film director.

It was a moment of doubt. I wondered, “Was I still making a difference to this film?”

It was also a moment of pain with pain. I was, as cyclists say, bonking, or hitting a proverbial wall of fatigue after riding hundreds of miles, including several days with a small group of cyclists through Tropical Storm Lee. The proverbial wall became a real one: this damn hill. On any other ride, I may have quit.

But today, most of the cyclists around me were hurting just as bad. As Dexter Durante, an Army master sergeant who was blinded when a small bit of C-4 explosive detonated in his face during a training accident, told me, cycling is like a bad relationship – the kind so bad that it’s good for you, if that makes sense. “You know, she hurts so bad,” he says in his poetic way. “Yet still, she’s addictive, you know. I can’t stop loving her. I’m all into her, even when I’m climbing up them hills.”

For years I’ve reported on the toll of the wars in Iraq and Afghanistan, including here at Salon. In two investigations, reporter Mark Benjamin and I revealed that troops with severe psychological trauma had been mistreated by commanders when they returned from brutal war deployments. Some were drummed out of the Army without adequate access to benefits, like help for their PTSD, at a time when suicides were hitting record highs.

Now, I was pulling a new thread in this story that has sweeping ramifications for not just a generation of American troops, but also their communities. Troops are fighting to recover from their wounds. If there are enough of them, they may alter the stereotype that many returning veterans are hardcore substance abusers who can become violent and dangerous.

I met young privates, hard-nosed sergeants, fresh-faced officers, Navy SEALs, Army Rangers and Special Forces officers. They were all joining cycling rides  – whether they were wounded warriors or not. Neither rank nor branch of service matters. When former Army Chief of Staff George W. Casey, a retired four-star general, joined the trek in September, he told everyone to call him “George.”

Vietnam vets I met along the way were almost jealous of this – in a melancholy sort of way. More than one told me they wished there was something like this for them when they returned from war back in the 1960s and 1970s. One told me he was so inspired by the young riders that he was now, after all these years, starting to address long-lingering psychological issues, including simmering, vague anger, head-on. Everyone I met, it seemed, was having nightmares. And everyone was finding a way to talk about them.

This is what John Wordin, a former pro cyclist and executive director of the Ride2Recovery nonprofit, wanted. Hundreds of troops, clad not in camo and boots, but superhero-like Lycra and clicky shoes, all riding together, helping one another by literally lending a hand by placing their palm on the back of the rider next to them (or on the push-bar of a hand cycle or recumbent). This makes hills easier. Moreover, they could talk about their problems with people who understand.

As I pedaled for hundreds of miles last summer and fall through several East Coast states and Normandy, France, I received a few pushes myself. I returned the favor and began to push others. Somewhere in there, riders began to trust us and tell their stories on camera.

In the film, troops talk about how their post-traumatic stress disorder evolved. Wives share what they thought when their husbands lost their legs. Riders speak about the darker places in their souls. Suicide was a subject that came up.

Then we’d ride some more. Then came laughter.

Besides the obvious benefits of cardio exercise, weight loss and muscle gain, bicycling creates a “runner’s high,” a rush of endorphins and a sense of euphoric bliss. As Tony Dragovich, a doctor at the pain clinic for Fort Bragg, North Carolina, tells me, “You relieve your own pain by doing this. So it becomes a self-fulfilling pain treatment.” The activity can be so powerful, he says, that riders with severe pain have kicked their dependence on prescription pills.

For some riders, there’s a new addiction: speed. After a grueling climb comes the reward of a fast descent in which bicycles can hit speeds of up to 60 mph. My mini bike computer has told me I’ve hit speeds in the high 50s many times and I can only say that it is seriously fun and scary all at once.

There are crashes. I saw one unfold before my eyes. As a small group of riders zoomed down a hill in Pennsylvania as part of a ride to meet up with a larger contingent of riders at ground zero in New York on Sept. 10 last year, three riders tumbled on the road when a stick got caught in someone’s spokes. One rider, Dick Brock, a gray-haired man who just rides because he loves being around veterans, needed a hip replacement.

That event was on my mind as we closed in on mile 911 in the suburbs outside the Pentagon in late September. I was also thinking about Army Sgt. 1st Class Justin Minyard, a 9/11 first responder and rider who came up with the idea of the 911-mile journey to honor the victims of 9/11. He couldn’t make it because of a medical issue and not being there was something he said he’d probably regret for a long time.

When we hit 911, champagne was everywhere, all over everyone. I’ve never poured champagne over anyone for a story. This was not any old story.

Several of the soldiers and Marines I rode with now call Greg and me friends. We made friends. As one sergeant wrote to me, “For a bunch of wounded guys and gals to accept and let you into our circle may not seem like a lot but it is. We are very protective of whom we tell and how we tell it. We created a special bond that I know that I will never forget.”

That’s the kind of solidarity that I want every average American to know is out there for them if they take the time to care. There are a lot of positives to having a military where men and women voluntarily agree to serve, but the system has also led to a divide. Many families seem blissfully unaware of the challenges faced by military families, including their tragic losses.

Whether you were for or against the wars, I’m here to tell you times are changing and war is winding down. The troops are coming home in droves and many have experienced horrific moments. Soldiers and their loved ones often tell me they are somehow different than when they left, changed in a sad sort of way, like the excitement of life is gone and can’t be recaptured. They are seeking their old selves – their true selves. They are looking for the persons they were before they went into combat. I am honored that I was there to catch a glimpse of the spark returning to their eyes.

To see the trailer for the film “Recovering,” click here.