The absurd life of an Abercrombie & Fitch model

How did a regular guy like me stumble into a job of emaciated youths and anonymous six-packs? Funny you should ask 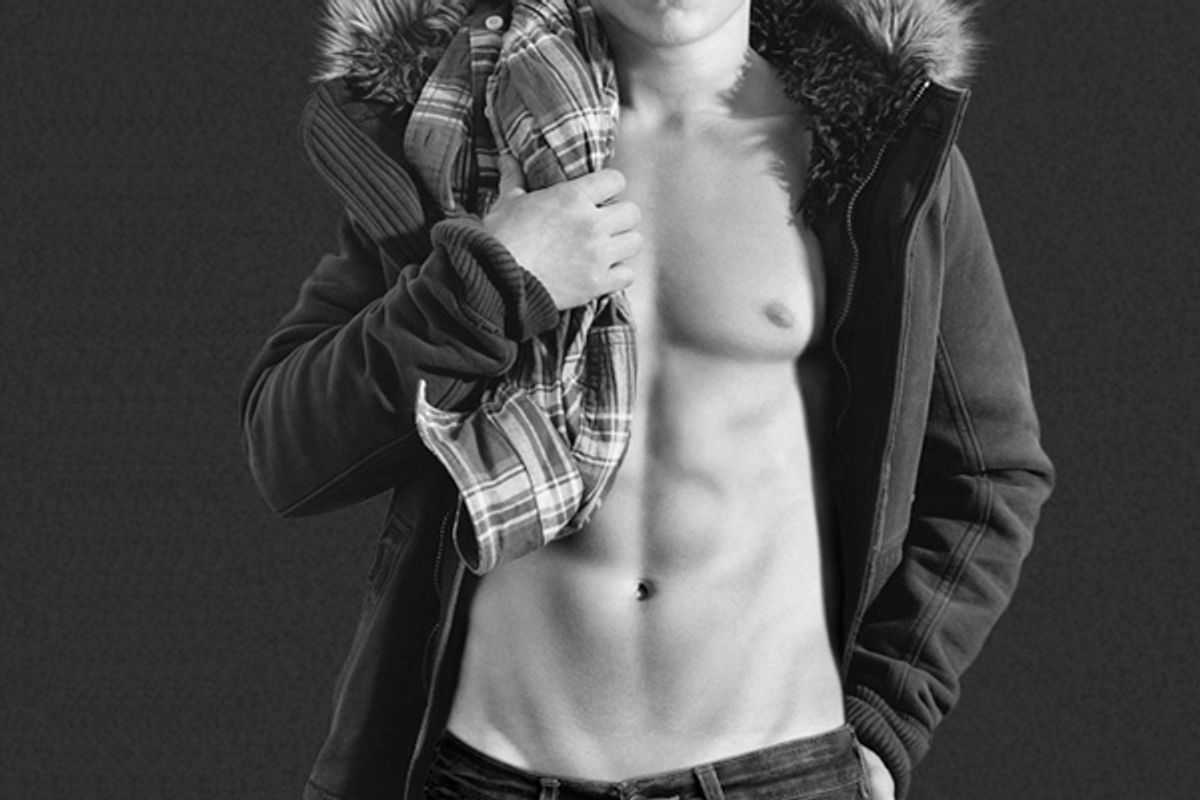 “Remember, we don’t do any advertising. So you are our advertising. You represent our brand. You are Ambercrombie & Fitch.”

Hey, guys — what’s going on? I am Ambercrombie & Fitch. I model for them at their store in the financial district in New York City, but I also do way, way more. I can find different sizes for you if you need it, but if not — hey, that’s cool. No pressure. I can also muss with clothing. Oh, and did I mention that I can shimmy? I can shimmy and gyrate and smell good doing it. I am Ambercrombie & Fitch.

You’re probably curious about a few things right now. One, is this idiot serious? I am. Two, what do I look like shirtless? Very cold. And, perhaps, three: How did this happen? How did a regular guy stumble into a job of emaciated youths and anonymous six-packs? How does one become a “model” for Ambercrombie & Fitch? One recent Tuesday afternoon, I was walking down upper Broadway trying to ignore the rain and avoid eye contact with every other street-bound soul when it happened. I was discovered. Yes, discovered.

“Hey! Hey!” a curly-haired 20-something I soon learned was named Vanessa shouted after me. “Hey. We just love your look.”

Now, this came as a rather large surprise considering a) I’ve been walking down streets for 26 years and this has never happened before and, b) I exclusively wear items purchased at either JC Penny or Kohl’s and am rarely (never) described as fashionable.

“I am downright flattered,” I told Vanessa, and meant it. What I knew about modeling was limited, but I was under the assumption the work likely entailed both more sex and more money than my normal reality as a journalist. (Which involves little, and less.) I told her I was in, so Vanessa jotted down my contact info and disappeared into the rain, promising to call.

To my surprise, two days later, she did. But by then I wasn’t so sure about the whole deal. I mean, Abercrombie & Fitch? I had never even been inside one of their stores, I explained to Vanessa. Would I also need to advertise clothing by not wearing any? Must I pout? What would my fishing buddies back home in Wisconsin think?

Vanessa, cool and persuasive, got me to agree to come “check out” a “group interview” at the original Abercrombie & Fitch store along the South Seaport a few days later. If nothing else, I figured it would give me something to write about. Vanessa added: “They’re going to just love you.”

When I arrived I didn’t know what to think. But after I was inside the store, that stopped being important. Everything, actually, except Abercrombie’s pulsing ephemera stopped being important. If you’ve never been to Abercrombie, let me tell you, it definitely kills one’s ability to form coherent, logical thought. No one has ever discussed matters of philosophy or the status of Iran’s nuclear capabilities within its confines. Everything’s dark and loud and confusing. You half feel like you’re playing laser tag and half like you’ve bumbled onto a reshooting of “Eyes Wide Shut.” The cultural aesthetic of the store straddles all of these notions. It’s a confounding, bombastic and erotic slice of our American zeitgeist. Put another way: White people love it.

Which, some accusations have gone, is exactly what’s wrong with Abercrombie — and its hiring policies. In 2003, several Asian, black and Hispanic job applicants filed a discrimination complaint in San Francisco against the company, alleging they were steered into the stockroom, not the sales floor. They said the company didn’t hire minorities as models. The clothing conglomerate denied this and defended their hiring policies as protecting their trademark look. The suit was eventually settled out of court for $40 million. (Company spokespeople declined to comment for this article.)

At the group interview, I learned that being a model at Abercrombie requires more than gyrating and shimmying, though these are necessary skills. Models are also called upon to fidget with clothing. Additionally they must memorize and employ as many as 10 company “taglines” to greet and dismiss customers, including: “Hey! What’s up?” “Thanks, guys! Catch you later!” And “Hey! What’s going on?” — not to be confused with “Hey, guys! What’s going on?”

As the job interview wound to a finish, I had a rare, existential moment. Maybe I was doing something wrong and deceptive here. All the other applicants really wanted this modeling job. They grinned. They chortled. They wisely advertised themselves with the words, “outgoing,” “positive” and “energetic” after the manager informed us they “wanted an outgoing, positive and energetic workforce.” Was I taking a job from someone in a desperate time — just to write an article?

One earnest applicant even told me he “hoped I would get it. You said some interesting things.” Really? I thought, convinced I had actually blown my cover when I described myself as “dogged and inquisitive” rather than positive. But the exact opposite occurred: I was hired, and told to be back at the store for orientation at 9 a.m. the following Sunday. My pay would be $9 an hour.

I’m sure many things of worth occur at this time of the week, like “Meet the Press” or, for some people, church. For me, however, 9 a.m. Sunday has little to no consequence. I never schedule anything of import early Sunday morning because I’ll likely be either late or still drunk. Luckily, Abercrombie isn’t something of import.

So that Sunday, I arrived for orientation 35 minutes late, half-hammered from the night before, and unapologetic. Something crazy then followed: No one — and I mean no one — cared. Not the other employees, assistant supervisors, or the manager. It was wild. There I was, unshowered, on one hour sleep, and barreling toward a traumatic hangover, and all anyone said was, “Hey! What’s up? What pants size are you?”

I now understand why pets got it so good. Nothing is ever expected of them. They just have to be friendly and be adorable.

I chatted up any coworker who would talk with me. To make conversation, I informed several people that Abercrombie had sold Ernest Hemingway the shotgun he’d used to kill himself in 1961. I also told my associates in jest that my favorite movie was “Zoolander.” I got a lot puzzled looks during those hours of orientation, so I decided to keep quiet and work on my taglines.

Even then, my manager told me I still wasn’t “ready for the show.” This was related to the fact my pants weren’t tight enough. Weren’t tight enough by far. At Abercrombie, I cannot overstate the cultural impact of wearing very skinny jeans, then plunging a thumb into each front pocket. This stance is very important. If you haven’t tried it before, I suggest you do.

With taglines memorized and skinny pants hugging things rarely hugged, I was ready for my first day at Abercrombie. I was ready to be a part-time model.

After enduring one last hiccup for wearing the wrong color of Chuck Taylor shoes — “are those bright green?” — I was put on greeting duty at the front door. This was my moment. I was Abercrombie & Fitch.

When a Korean family stepped inside, I fished out my most potent tagline immediately: “Hey, guys! What’s going on?” They looked at me strangely, didn’t reply, and darted past. This happens a lot when tourists “are taglined,” my co-greeter, another Vanessa, told me. Us models hurl the most American of colloquialisms at thousands of foreign-born tourists who have rarely encountered such Americana before. In that case, I said, what’s the point of taglines? She paused for a moment and said she didn’t know. I agreed.

What I learned about being a model? It’s crushingly boring. I’m sure it’s different for Giselle or Tyra Banks, who get to adopt languid poses on some beach in Australia. But this was New York. And I was wearing skinny jeans and lima bean Chuck Taylors.

Two hours into a six-hour shift I quit. I tried not to be too melodramatic about it but was tempted to hand back my red-and-blue plaid shirt like I would a gun and badge to a police chief, telling my bosses I did everything I could to save those kids on that burning bus.

No one seemed too upset to lose me. Lady Gaga was pounding. The air was thick with perfume. Beautiful people were smiling everywhere. As I walked out, my manager glanced at me, grinned a wide one, and said: “Thanks, bro! Catch you later!"

Terry McCoy is the Gordon Grey Fellow of International Journalism at Columbia University. His work has appeared in the Atlantic, GlobalPost, and The Daily. He was recently hired as a writing fellow for Village Voice Media at the Houston Press.