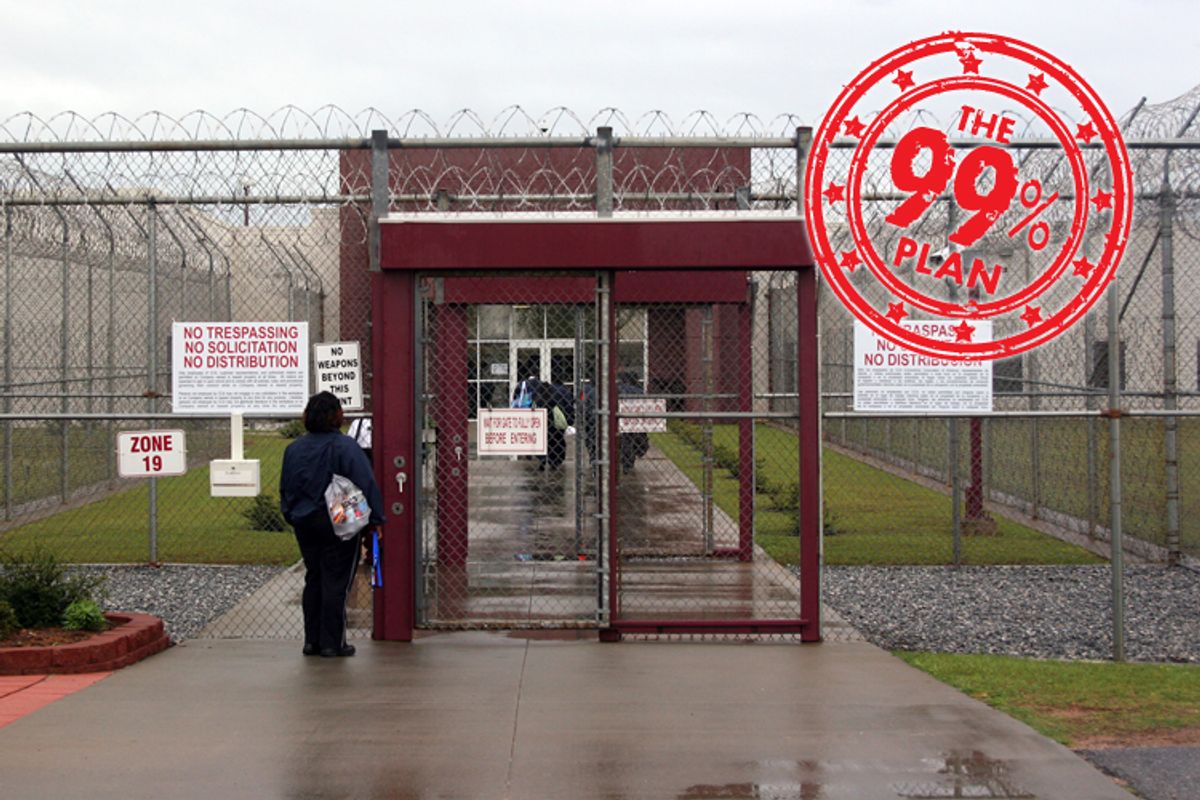 An employee of Immigration and Customs Enforcement's Stewart Detention Center in Lumpkin, Ga., waiting for the front gate to be opened. The detention center is operated on contract by Nashville-based Corrections Corporation of America. (AP)
--

The 99 Percent Plan is a joint Roosevelt Institute-Salon series that explores how progressives can shape a new vision for the economy. This is the first essay in the series.

Privatizing the government is one of the most active projects of the early 21st century.

Everything we once expected the government to do -- from education to regulatory rule-writing to military operations to healthcare services to prison management -- it now does less of, preferring to support markets in which these services are done through independent, profit-maximizing agents. Tools such as contracting out, vouchering and the selling-off of state assets have been used to remake the government during our market-worshipping era.

Privatization is one of the few political projects that enjoys bipartisan support: Conservatives cheer the rollback of the state, and liberals like to claim that the virtues of the free market are being used towards the egalitarian ends of public policy. The fraud and waste that often come with outsourcing these services has been well-documented. The private management in Iraq and the aftermath of Hurricane Katrina, and the lobbying efforts of corporate prisons have all provided horror stories of what happens when cronyism guides decision-making on behalf of the state. But privatization as standard government practice has problems that go far beyond the abuses of any single incident.

Rather than solving problems with government, privatization often amplifies those issues to new extremes. Instead of unleashing market innovation, it often introduces new parasitic partners into the decision-making process. Instead of providing a check on the power of the government, it allows the state to circumvent constitutional and democratic accountability measures by merging with the private sector. And ultimately, the practice replaces the set of choices and constraints found in democracy, with another set found in the marketplace. Today’s political conversation is blind to these problems out of a mistaken faith in the efficiency and fundamental equality of markets, contrasted to the ineffectiveness and corruptibility of the state.

What advocates miss is that the logic of markets creates private-sector coalitions capable of extracting just as much from taxpayers as the state. Corporations, lobbyists and other market actors can have just as much political agency as the government, and privatization can mobilize businesses to rewrite market practices.

This political process plays out in the quality of the services provided and the structure of the companies providing them. Privatization has sometimes meant that the most lucrative and easiest parts of these government obligations go into private hands, creating private profit, while the most difficult and dangerous parts remain with the public. This can range from the “privatizing the gains, socializing the losses” of various parts of the financial sector to the “cream-skimming” that goes on in many other industries.

If privatization is meant to put a check on the size and power of the state it often backfires, as the practice can be used to circumvent normal mechanisms that exist to hold the state accountable. A whole array of transparency laws and constitutional checks don’t carry over when the government outsources its responsibilities and activities to independent businesses.

Privatization as a way of avoiding constraints and accountability measures has two particularly troubling consequences. First, the government can use independent agents to do things that they themselves cannot do, betraying the whole point of keeping government in check. Especially in the world of surveillance, this practice can act as a way to get around constitutional protections enjoyed by citizens.

Second, accountability measures that have evolved through decades of public law are jettisoned when a service leaves the public sector, allowing companies to do the government’s work in a network of secrecy. Ways the public keeps a check on the government, from the Freedom of Information Act to the Administrative Procedure Act to whole regimes of other transparency laws, do not bind outside businesses.

The Constitution prohibits the delegation of significant state powers, but the Supreme Court currently puts few constraints on the government to outsource many of its important duties. What today’s discourse ignores is an understanding of the liberal conception of what public and democracy itself is good for -- as a way to check private and government power, and promote accountability and responsiveness.

These blur into dark scenarios where private-public relationships give public agents maximum discretion in exchange for giving private agents advantages over their competition. For example, after FedEx’s CEO announced that his company would be cooperating with the government following the Sept. 11 terrorist attacks, the firm received a number of rewards. Ranging from special access to security databases, to a prize seat on a regional terrorism task force (the only private company represented) and special state licenses, these benefits amplified the firm's power in the marketplace over noncooperative competitors like UPS, all in exchange for amplifying the power and reach of the state.

Defenders of privatization also argue that the marketplace creates innovation. Competition, the profit motive and the “creative destruction” of the market system can be deployed to increase the efficiency and effectiveness of government services. But what this outsourcing really does is move constraints from one space to another. It transforms the strengths and weaknesses, the limits and the constraints, from government to the market.

Privatization replaces the democratic role of citizens finding solutions to collective problems and transforms it into consumers trucking and bargaining in a marketplace. Finding solutions in a public space emphasizes accountability, voice, transparency, rules and claims through reasoning that goes beyond the self.  The market emphasizes cost-benefit thinking, profit-seeking strategies, bargaining and the satiation of individuals’ wants; good things in many circumstances, but not necessarily when it comes to the powers of the state.

Take prisons, for example. With the addition of privately run prisons, the debate narrowly focuses on how much to spend on prisoners. Minimizing costs here will often be the result of simply providing less of a good at a worse quality, and the debate will focus on the optimal extent of these privatization contracts. Meanwhile, the greater question of when the state should imprison people fades to the background.

What’s actually public about these responsibilities disappears from the conversation. Privatization assumes that cost quantifying solutions are more fundamental to government than any discussion of ethics or values. The move away from democratic accountability is particularly worrisome because in many of these fields, the ultimate motivator of private markets, the profit motive, is in direct conflict with the public administration. The basic values, concepts and institutions of liberal democracy -- political participation, elections, equal distribution of individual liberties, checks on concentrated power -- do not work towards economic competitiveness.

The ideology that the government is just one among many providers of goods and services is a seductive one in this age of markets. But the government isn’t simply just another agent in the market, and firms that are empowered to carry out the role of the state can be as abusive as the worst bureaucracy.

We need new arguments for the government, with all its strengths and weaknesses, to be allowed to do its jobs knowing that it won’t always be perfect. The alternative is government by cronyism, delegated marketplace winners exploiting what works about markets with none of the normal checks we expect on a functioning democracy.  There are no doubt weaknesses in the current functions of government, but for those who resist privatization, that is a call to political reform rather than one of abandoning the public arena altogether.