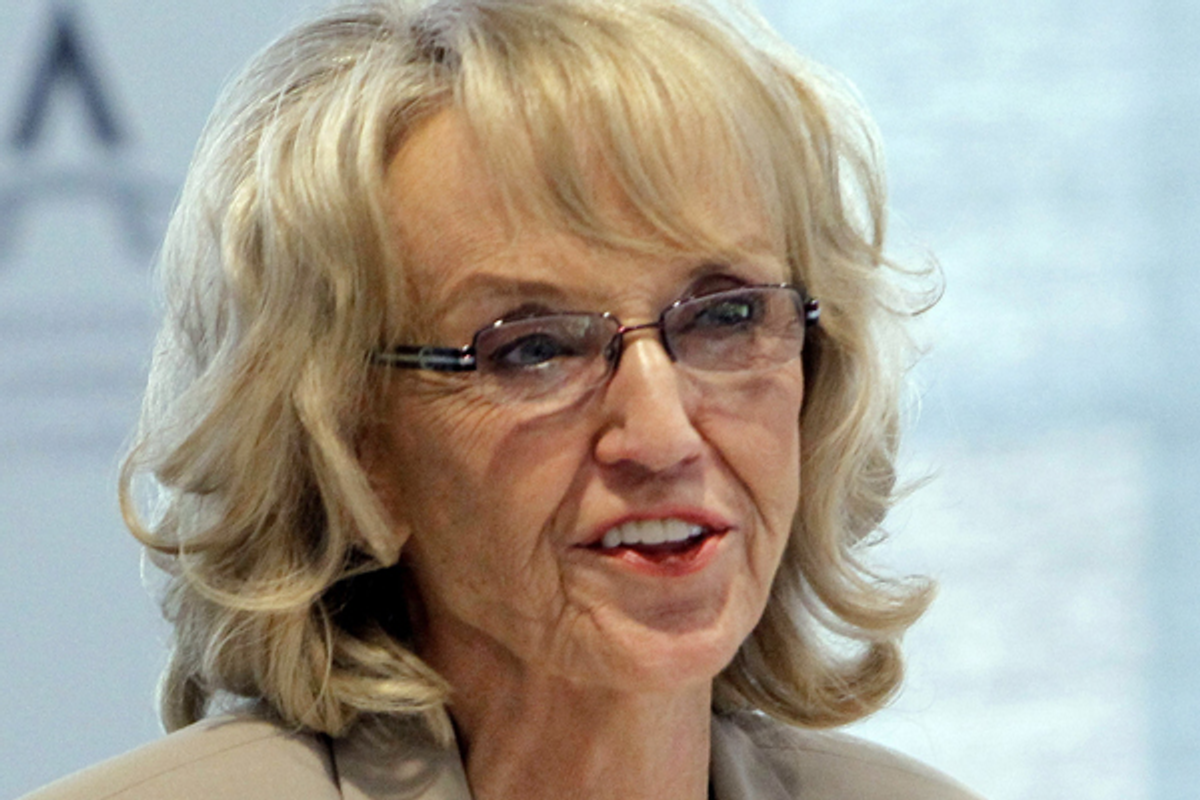 Not content to let Wisconsin Gov. Scott Walker and Ohio's John Kasich get all the fame (and recall elections, and ballot referenda) for their attempts to curtail union workers' rights, a new crop of GOP governors and state legislators have jumped into the fray and proposed their own anti-union bills in recent weeks.

Along with South Carolina's Nikki Haley and Indiana's Mitch Daniels, Arizona's Jan Brewer, not content with making her state the least friendly to immigrants and people of color, has decided to get in on the union-busting action as well, introducing a bill that makes Walker's and Kasich's attacks on public workers look mild.

Brewer, the Republican left in charge of the state after President Obama tapped Janet Napolitano to be his secretary of Homeland Security, has been planning anti-union moves since last spring with the backing of the Goldwater Institute. (Named for Barry Goldwater, the think tank pushes for “freedom” and “prosperity” -- as long as it's not the freedom or prosperity of state workers.)

It's not just Arizona's right-wingers who are pushing Brewer to beat up on unions -- John Nichols at the Nation notes that Walker may have had a hand in helping push an anti-labor agenda, and the American Legislative Exchange Council (ALEC) is involved. In a speech to the right-wing policy shop behind many of these anti-union bills last year, Brewer complained about her inability to fire government employees and supervisors' difficulty “disciplining” workers.

This week, the Republicans in the state Legislature introduced moves that would make collective bargaining for public workers completely illegal. Here, we break down what you need to know about Brewer and the GOP's anti-worker agenda.

SB 1485, the first of the bills to take on union rights, declares that no state agency can recognize any union as a bargaining agent for any public officer or worker, collectively bargain with any union, or meet and confer with any union for the purpose of discussing bargaining.

While Wisconsin's law bans public employees from bargaining over everything but very small wage increases, Arizona's bill bans collective bargaining outright and refuses to recognize any union as a bargaining unit. Existing contracts with unions will be honored, but not be renewed if this bill passes.

2. Arizona includes police and firefighters in its ban.

Arizona, as Dave Dayen at FireDogLake noted, “is changing to a purple state because of an extreme legislature which first demonized immigrants, in what could start a backlash among the Hispanic community. Now, flush with that success, the legislature will demonize police and firefighters. It’s not exactly a textbook strategy for a lasting majority.”

Walker's attempt to divide and conquer public sector unions by attacking some and not others didn't work; perhaps that's why later attempts at similar bills didn't bother giving special treatment to public safety workers. But as we saw in Ohio, the support of the traditionally conservative police and firefighters' unions helped unite the state's voters and bring out record numbers to vote down the bill. Arizona seems to be asking for trouble by targeting police and firefighters with this bill.

3. The state would ban government employers from deducting union dues automatically from a worker's paycheck.

Not content with banning bargaining, the Arizona legislature is also out to make sure unions can't collect any money for the work they do. SB 1487 inserts language into existing law that says “This state and any county, municipality, school district or other political subdivision of this state may not withhold or divert any portion of an employee's wages to pay for labor organization dues.”

This move obviously is aimed to hit unions right in their wallets — taking away the funding they need in order to do more organizing, and carry out political activity.

4. Arizona would ban the government from allowing employees to do union work on company time.

Laura Clawson at Daily Kos notes that in addition to the other measures, Arizona's Republicans also want to eliminate “release time,” a practice “in which union stewards and other representatives are allowed to spend work time on certain union functions, such as contract negotiations or handling grievances.”

Union stewards and representatives are full-time employees who take on additional responsibilities on top of their jobs—a move like this makes it harder for them to carry out those responsibilities to their fellow workers without fear of facing sanctions from their bosses. Specifically banned by the bill, SB 1486, are “activities that are performed by a union, union members or representatives that relate to advocating the interests of member employees in wages, benefits, terms and conditions of employment."

5. Brewer also wants to eliminate any job protections for workers, buying them off with pay raises.

Brewer plans to offer public workers their first pay raise in years, a 5 percent increase. The tradeoff? They have to opt out of job protections some of them currently enjoy, including the right to appeal demotions and protection from being fired without cause – they have to become at-will employees.

Like most “merit pay” arrangements, this one sounds good at first — hard-working people will get raises! -- but workers see right through it. Odalys Hinds, who works in the state health lab, told the Arizona Republic, "No way will I do it. I won't take it -- it basically would take away our rights. My retirement's gone up. My insurance has gone up. There's going to come a day when I'm going to have to pay the state to work."

6. Arizona is already a “right-to-work” state

The kicker to all this? Arizona workers already enjoy fewer protections than those in Ohio and Wisconsin. Arizona is a so-called right-to-work state, where unions cannot collect a fair share of the direct costs of representation from workers who opt out of joining the union — even though the union is compelled to represent all workers.

This means that unlike the Midwestern states, Arizona has few union members already and that means there are fewer people who are likely to be outraged and moved to protest by attacks on collective bargaining. Yet Brewer, the Goldwater Institute and the Republicans in the Legislature aren't content with what they have and are moving to make public sector unions all but irrelevant, by making it nearly impossible for them to do their jobs.

Arizona now has a strong Republican majority in the Legislature, and so barring a change of heart by a handful of GOPers, the anti-union measures are likely to pass. But if Brewer continues to antagonize working people in her state, John Nichols notes, Arizona does have something else in common with Wisconsin — provisions that allow for the recall of the governor and state legislators, provisions that were used just last year to remove Russell Pearce, the state senator responsible for the state's hideous anti-immigrant law, from office.