We have no shortage of skilled engineers. Corporations would just rather import foreign ones on lower wages 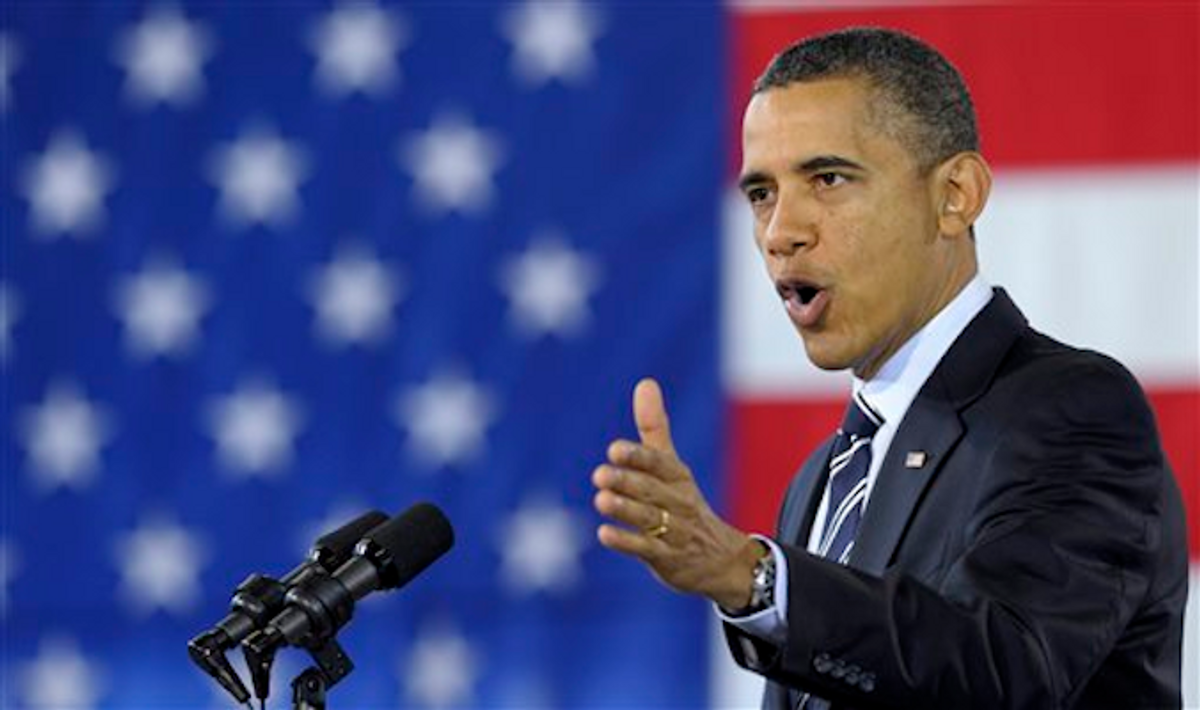 A few days after the New York Times' (embarrassingly belated and deeply flawed) article on Apple's Chinese production facilities reignited a national discussion about offshore outsourcing, President Obama was confronted during a Google+ "hang out" about why during a brutal unemployment crisis his administration continues to support expanding the H-1B visa program that allows tech companies to annually import thousands of low-wage engineers from abroad. In his stunning answer, the president first expresses bewilderment that any American high-tech engineer could be out of work, because he says that "what industry tells me is that they don't have enough (domestic) highly skilled engineers" and that "the word that we're getting is that somebody (a domestic engineer) in a high-tech field should be able to find something right away." He then goes on to insist that the H-1B program is "reserved only for those companies who say they cannot find somebody in (a) particular field" and that it shouldn't apply to industries where "there are a lot of highly skilled American workers" looking for a job because he says his administration is focused on "encourag(ing) more American engineers to be placed" in open positions.

For a single news cycle, the interchange made headlines focused on the president's subsequent request that the questioner send her husband's resume to the White House. But as heartwarming as that human interest angle was, it buried the real news in the interchange: namely, that Obama showed himself to be either wholly ignorant of the reality facing high-tech workers today, or simply willing to echo the self-serving lies of his high-tech CEO friends. Whichever it is, the president's claims are clearly at odds with the basic facts of the high-tech labor market.

Though the unemployment rate for the high-tech industry is certainly lower than the overall unemployment rate, the sector is far from the full-employment status that tech CEOs claim. No matter what the industry is "telling" Obama, there remain thousands of highly skilled engineers in America who are either underemployed thanks to tech companies use of the controversial "permatemp" status, or completely out of work. That's because, as I noted last week, despite the political rhetoric to the contrary, our universities are producing far more Science, Technology, Engineering and Math (STEM) workers than allegedly worker-starved tech companies are willing to employ. Indeed, a generation of jobless engineers exists not because, as tech CEOs insist, they don't possess the skills to fill open jobs, but because those tech CEOs aren't looking for domestic workers. On the contrary, they are looking for foreign workers who will simply accept lower wages and fewer workplace rights than Americans.

That brings us to the president's comments about the H-1B program -- an instrument so antithetical to the interests of American workers that India's Commerce Minister officially christened if the "outsourcing visa" in 2007. As Rochester Institute of Technology professor Ron Hira has expertly documented in congressional testimony and detailed reports, this visa both allows American high-tech companies to replace their domestic workers with cheaper foreign workers, and also allows foreign outsourcing firms to move huge swaths of America's existing high-tech industry offshore for the long haul.

In the first scenario, which I reported extensively on in my 2008 book "The Uprising," a high-tech company will simply terminate an existing American worker -- typically, a more senior worker whose longtime service at the company has resulted in higher wages. Then, the company will use an H-1B visa to import a foreign replacement for that worker -- one who accepts far lower wages and benefits, both because the wages in their home country are lower that what they are being offered on the H-1B temporary visa, and because their H-1B visa status is wholly controlled by the employer. That means that most foreign H-1B workers wouldn't dare ask for the same wages as their American counterparts because it would mean asking for equality from an employer who has the unilateral power to deport them.

The effects of this particular use of the H-1B visa are not surprising. As the Government Accountability Office noted, many high-tech "employers said that they hired H-1B workers in part because these workers would often accept lower salaries than similarly qualified U.S. workers." That is borne out by wage statistics from the U.S. Citizenship and Immigration Services agency, which the New York Times reports found that "the median salary for new H-1B holders in the information technology industry is actually about $50,000" as compared to much higher wages for similarly skilled domestic workers. And in case you believe President Obama's mind-boggling assertion that H-1B visas are "reserved only for those companies who say they cannot find somebody in (a) particular field," remember that his own Department of Labor admits the opposite is true: The visa may be used and “H-1B workers may be hired even when a qualified U.S. worker wants the job, and a U.S. worker can be displaced from the job in favor of the foreign worker.”

As Hira reported in a study for the Economic Policy Institute, this straightforward use of the H-1B visa has easy to understand effects at some of America's biggest tech firms:

In early 2009, Microsoft announced it would lay off 5,000 workers. After meeting that target by late 2009 it announced another round of 800 layoffs. Yet it continued to import H-1B workers, ranking fifth in FY08 and moving up to second in FY09 on the top H-1B employers list. It received 2,355 H-1Bs in those two years alone. Microsoft also extensively contracts with leading offshore outsourcing firms like Infosys and Satyam, which provide on-site personnel on guest worker visas. In addition, it recently signed a major three-year contract with Infosys to “handle all the technology services and support for Microsoft itself." Given Infosys’ statements in its SEC filings, the vast majority of the workers servicing the Microsoft contract will almost surely be guest workers on H-1B and L-1 visas...

Hewlett-Packard announced layoffs of nearly 25,000 employees after its acquisition of EDS in 2008, yet H-P and EDS, and its offshore outsourcing subsidiary MPhasis, received 1,047 H-1Bs and L-1s in 2008 and 2009. Not all of those 25,000 jobs would be lost -- approximately half of them were going to be offshored to workers in low-cost countries.

Of course, one of the most compelling arguments forwarded by proponents of the current H-1B program is that even though existing American employees are being put out of work by H-1B visa holders, at least these new arrivals to the United States might stay here, thus permanently adding their valuable high-tech skills to the overall American workforce. While that may be true for some of the H-1Bs who work directly for American firms, note the section in the above passage about foreign companies such as Infosys and Satyam, because it highlights that second, even more insidious way the H-1B program today operates -- specifically, the way it works with non-American "consulting" firms.

Recall that such consulting firms whole business is helping American high-tech firms permanently move various IT services and operations overseas -- not because workers in those countries are better skilled or educated, but because they will accept far lower wages and workplace standards. In this, we're not talking about Microsoft or HP hiring a few lower-wage fill-ins -- we're talking about Microsoft or HP hiring an entire foreign firm like Infosys or Satyam to help them subcontract huge parts of their existing American business to foreign locales where wages are way lower, workplace regulations are lax, and unions do not exist. Once such contracts are in hand, these foreign subcontractors acquire thousands of H-1B visas from the U.S. government and dole them out to their own employees working on a contract basis inside major American high-tech firms inside the United States. Those employees are charged with helping those American firms permanently shift so-called "back office" services to low-wage locales like India. As the New York Times explained:

(Indian outsourcing consutancy firms) have used (the H-1B visa) to further their primary mission, which is to gain the expertise necessary to take on critical tasks performed by Western companies, and perform them in India at a fraction of the cost. Thousands of H-1B visas every year are being won by individuals acting as outsourcing ambassadors. Highly skilled and easily meeting the objective standards for excellence that the law requires, the employees interact with U.S. companies like Morgan Stanley and Boeing, gathering an outsourcing mandate and lubricating the flow of tasks to an Indian back office...

According to data compiled by ComputerWorld, this manipulation of the H-1B program is now one of the biggest ways the visa is used. As the trade magazine reported just three days before President Obama's public defense of the H-1B program, foreign "offshore outsourcing companies" -- read: companies that subcontract huge swaths of domestic work to low-wage locales offshore -- now "make up the majority of the top 10 H-1B visa users in 2011." This is why in a separate story, the Times went on to report that relatively few H-1B employees from offshore outsourcing firms seek permanent green cards. Far from the H-1B being used in the way its proponents assert -- as a method of attracting new, high-skilled workers to become permanent residents and thus improving America's overall high-tech workforce -- the H-1B is now being used as a means of shipping America's entire high-tech industry offshore.

To be sure, it's impossible to know if President Obama is simply ignorant of these facts, or merely doesn't want to acknowledge them, for fear of alienating his campaign donors in the high-tech industry. But don't discount the power of those donors to turn an incumbent president into their own public advocate -- especially during an election season when that incumbent president has a well-known history of relying on high-tech donors to underwrite his election campaigns. Obviously, those donors have a vested financial interest in answering Obama's fundraising call if -- and when -- that president seems determined to preserve the status quo and oppose any proposed pro-worker reforms of a program like the H-1B visa. After all, no matter if they are replacing domestic American workers with imported H-1B workers, or using the H-1B program to shift huge parts of their businesses offshore, those high-tech executives have a very lucrative scam going, and clearly, they don't care if American workers are the ultimate victims.

Whether the president cares remains an open question -- but based on his comments about the H-1B program last week, his ultimate answer doesn't look promising.